With Cruella hitting theaters and Disney+ (with Premier Access) on Friday, May 28, Vital Thrills talked to stars Emma Stone and Emma Thompson about the highly-anticipated film.

It’s unusual to have below-the-line talent like department heads in a film’s official press conference, but once you see Cruella, you’ll understand. The production, costume and hair and makeup design are characters in and of themselves.

Cruella is a dark movie for Disney, and Emma Stone was surprised by how dark they let it get. “It’s definitely dark for a Disney movie. Maybe not for a really intense kind of R-rated film, but it was darker than I’ve seen a Disney movie for good long time.”

Emma Thompson spoke about her character The Baroness, who is new to the Disney universe. She joked, “I think if my husband were in the room, he’d say, ‘And no acting required, really.’ I had such fun doing her, because I think I’ve been asking for quite a number of years if I could be a villain, a proper villain.

“I spent decades playing what my mother used to call, ‘Good women in frocks.’ And now I get to play a really evil woman in frocks, but boy, oh boy, the frocks. I mean, they wore me, actually, really is what happened.

“I had just the best, best time, and every time Em and I would come on set, we’d just look at each other and walk around each other like we were sculptures or works of art or something, which we were. I mean, it was in a way, everyone created the Baroness, and then I sort of stepped in and just said the words.”

Emma Thompson also joked about how her underwear was “like a sort of ship’s rigging. There were people hauling on ropes. It was a lot. So, uh, peeing was hard and involved a team of people. Also, the shoes were a real challenge because I don’t wear anything higher than a flip flop in real life.”

There is a moment in the film where the Baroness litters in a rather spectacular way. Stone said, “That’s one of my favorite moments, too, when the Baroness throws the cloth napkin and the actual fork out of the window. It really made me laugh when we were shooting it. Every time she did it, it made me laugh.”

The clothing in this film is beyond spectacular. Stone said, “My very, very favorite outfit was that was absolutely ludicrous was the dress I wear on the garbage truck [something you can see in the still and the trailers], because there was a 40-foot train. And that wasn’t attached to the dress, because obviously I wouldn’t be able to move anywhere, so they added that onto the dress at the last minute when I get onto the garbage truck to shoot the last part… nothing you would ever be able to even remotely wear in real life.”

We know what you’re thinking. Are dogs hurt in this film? We all know what Cruella has a reputation for. Fear not. The dogs in this film are fantastic characters. You can breathe again. In fact, both Emmas really enjoyed the dog actors.

Stone even said that “Estella’s [Cruella’s real name] dog Buddy, who’s real name is Bobby, was – I genuinely think he was the cutest and sweetest dog I had ever known in my life, and I’ve got a lot of dogs, so that’s saying something.”

So, who is the Baroness? Emma Thompson spoke about her, saying, “I’m very interested in the dark side of a female character, because they’re so rarely allowed to be dark. You know, we’re all supposed to be nice and good, aren’t we? And bad mothers are simply unforgivable…

“…the Baroness is just – she’s so single-minded and she says this wonderful thing. She says, ‘If I hadn’t been single-minded, I might have had to put my genius at the back of the drawer,’ like so many other women of genius, who died without producing anything and without using their genius.”

Director Craig Gillespie talked about what his primary goal was when making a film about a villain. “Villains are always so fun to portray, because you just have more license to do things that aren’t quite appropriate, or push the boundaries, and create these larger than life characters.

“It was really important to me that this was not black and white. Obviously no pun intended there with Cruella. But I wanted there to be this gray area and be able to empathize with the choices that she was making, and the stiuations she was responding to. And I wanted to do it in a way that was fun.”

Costume designer Jenny Beavan grew up in London during the time this film is set. She said, “I absolutely remember it, because it was that time after college when I was just beginning to work in theater, not film at all. I really wanted to be a set designer… It’s really interesting how you kind of forget things, and then you do something like Cruella and it starts to come back.”

Beavan also talked about costuming both of the main characters. “We hopefully found an arc that you see her [Estella to Cruella] change over from a child where she’s obviously anarchic and rebellious, and does things to her school uniform… you see how she develops. I think when she gets to the Baroness who is a little old fashioned, but a very good designer, she learns quite a lot and hones her skill.”

Production designer Fiona Crombie said that this was a production with a lot of sets – 120-ish of them. “Some of them are enormous, and some of them are tiny, like little rooms, but I think one of the things that I’m most pleased about with the film is the level of detail in every single one of those sets.”

“When we first see Estella, it needs to be believable that she’s a girl that’s growing in the time in London, and then she’s creating this persona in Cruella. So when she first starts arriving to these red carpet moments, there’s a kind of mask-like quality in all the makeups as well… I needed to keep Estella quite simple so that we had somewhere big to go for Cruella.”

Finally, there is an unsung (so far) character in the film called Artie, played by John McCrea. You’re going to fall in love with him. Gillespie said, “There’s obviously a big Bowie influence going on here… we wanted to cast a person that would be fluent and of the time… not necessarily defined. Artie was so great with that nuance and just finding that personality.

“He actually ended up bringing a lot more than was on the page to that. We even went back and shot an extra scene with him and Emma [Stone] because he really brought so much to the character.” We won’t say more about him, but he’s going to be a fan favorite. 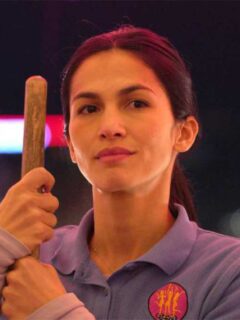 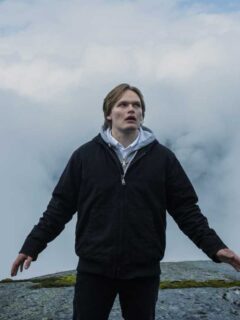 Next
Ragnarok Season 2 Trailer and Good on Paper Revealed
Click here to cancel reply.
Disclaimer: This post may contain affiliate links through which we earn a commission if you decide to make a purchase, at no cost to you. As an Amazon Associate, we earn from qualifying purchases.
Amazon Prime Day 2021 is June 21 and 22! Click here for the deals.