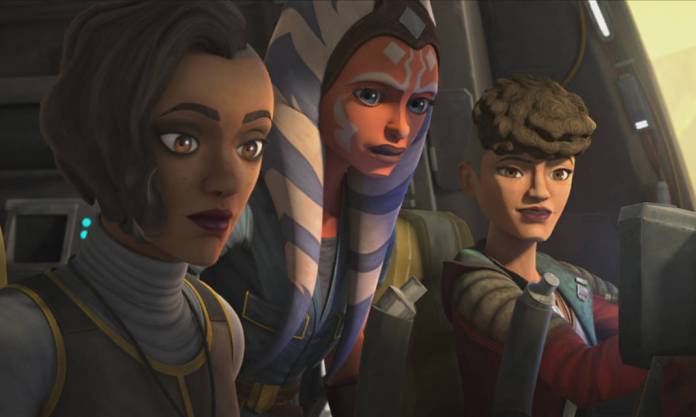 Star Wars: The Clone Wars has returned for its seventh and final season on the Disney+ streaming service. In this review, we’re taking a look at the sixth episode of the season, titled “Deal No Deal.”

When Trace Martez pilots her prized ship on a mysterious job arranged by her sister Rafa, Ahsoka is alarmed to learn they are transporting for the evil Pyke Syndicate. Fearing that her ship may be at risk, Trace makes a rash decision that puts them all in peril. 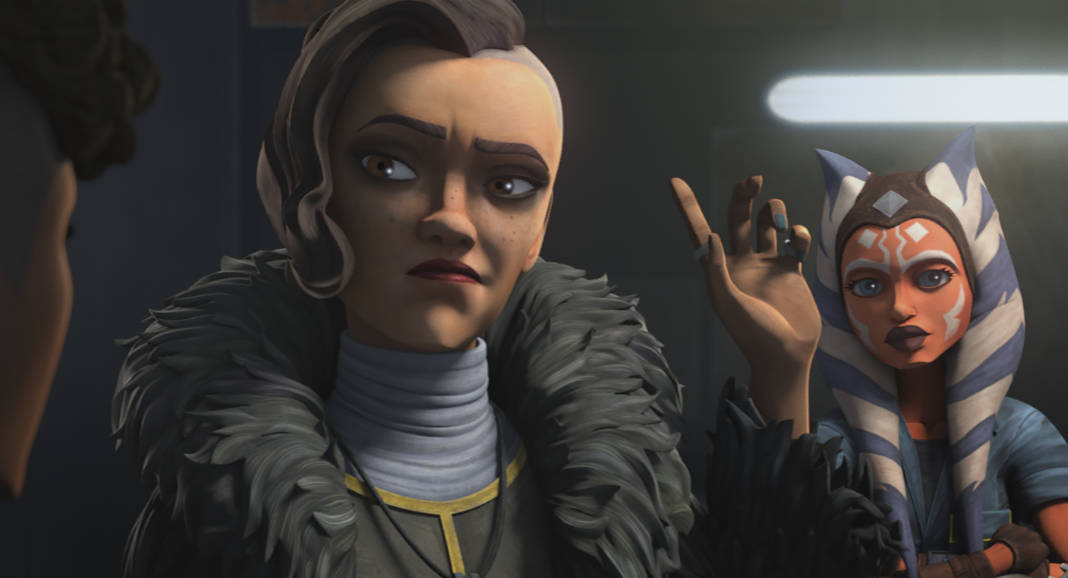 Ahsoka Tano continues her long awaited return in “Deal No Deal.” And despite having left the Jedi Order, we’re treated to a brief reunion with Anakin Skywalker, of sorts, in a moment reminiscent of a classic scene in Return of the Jedi. It’s a poignant moment that becomes more meaningful considering their eventual showdown in Rebels.

That isn’t the only nod to the live-action films in this episode, as the bulk of it actually takes place on the planet Kessel as seen in Solo: A Star Wars Story. We see some new corners of the infamous planet and Ahsoka is confronted by the shortcomings of the Republic and the Jedi philosophy when the spotlight is shone on the slave miners on the planet. It’s an interesting reminder that the Jedi still had a lot of work to do in the galaxy. 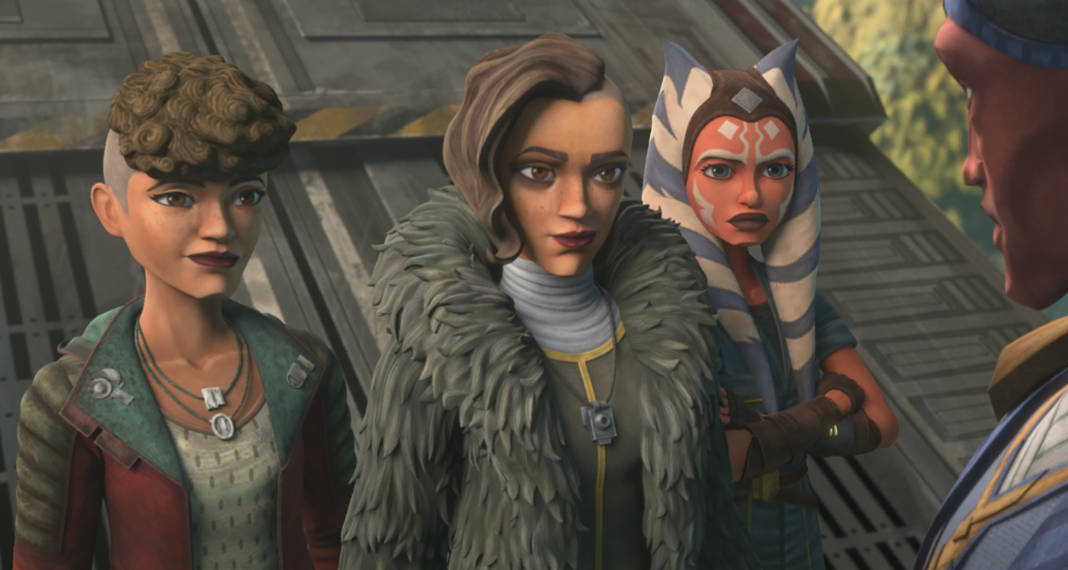 While the episode focuses on Ahsoka, it’s the new Matrez sisters who steal the spotlight. We see a bit more of the dynamic between the three characters as they bicker over how a mission should be conducted when it is revealed to be less than legal. As mentioned before, the dynamic between sisters was only seen before in The Last Jedi, so it’s interesting to see that type of relationship explored in-depth here.

“Deal No Deal” has a nice moment early on when we’re introduced to the ship “Silver Angel.” Custom built by Trace, it’s a bucket of bolts akin to the Millennium Falcon, yet its debut is surprisingly emotional and majestic. Spaceflight is so commonplace in Star Wars it’s nice to take a step back on occasion and appreciate how awe inspiring it is.

The production design in The Clone Wars continues to be impressive. This is especially the case with the design of the new aliens – the Pykes. They have unique clothes, voices, and movements that are noteworthy. 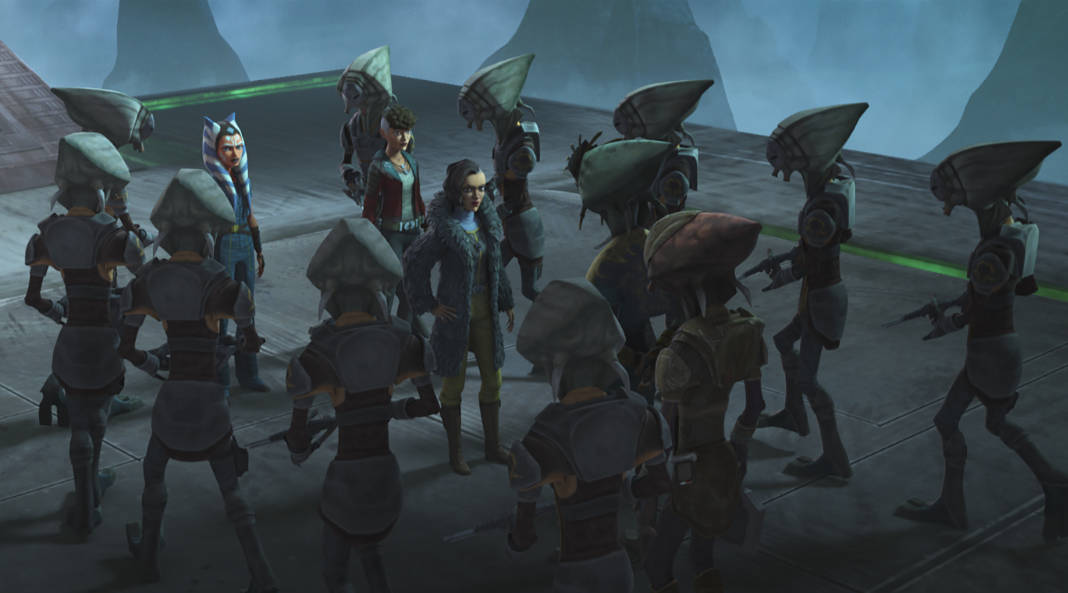 While it’s fun to see Ahsoka Tano back on the screen, she’s a bit of a wet blanket in this episode. She’s constantly correcting or chiding the Matrez sisters and you start seeing why Rafa would want her to hit the road. Hopefully she becomes a bit more fun in subsequent episodes.

A revisit to Kessel and the further development of the Matrez sisters makes this a noteworthy episode. “Deal No Deal” ends on a cliffhanger that will have you glued to Disney+ next week for the seventh episode.

In honor of National Streaming Day, Disney+ has shared new images from Muppets Now and Phineas and Ferb The Movie: Candace Against...
Read more
Streaming

Artemis Fowl Clip Features the Search for a Journal

Clouds to Premiere on Disney+ in the Fall

Disney+ announced today that the moving and inspirational feature film Clouds will premiere exclusively on the streaming service this fall. The film,...
Read more
Streaming

Originally announced as an October 15, 2021 theatrical release, The Walt Disney Company revealed today that the Hamilton musical will now be...
Read more
Streaming

Temuera Morrison to Play Boba Fett in The Mandalorian!

The cast for Disney+ series The Mandalorian Season 2 is steadily growing and a big name was added today. According to The...
Read more

Netflix has released the Da 5 Bloods poster this Memorial Day and you can view the full poster below. Director Spike Lee...
Read more

It’s not the end all of a new film when it sticks to a premade plot formula. There are only so many...
Read more

FX has released a first look at What We Do in the Shadows Season 2 Episode 8 in the form of a...
Read more
Load more