Cats Review: The Film Adaptation of the Stage Musical 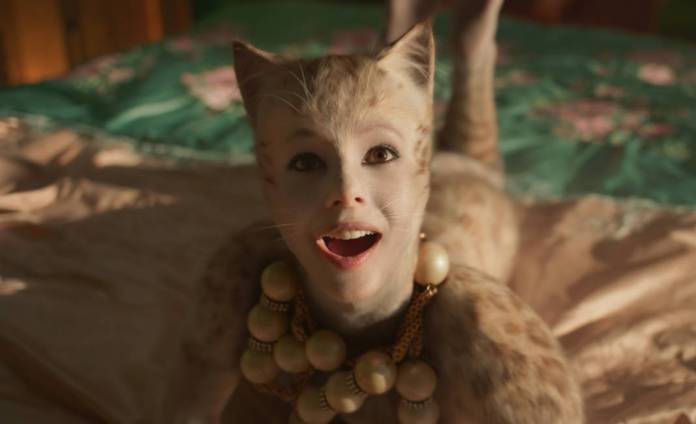 If I were less professional, this entire review would just be a GIF of Chris Pine in Star Trek Beyond exclaiming in surprise when the little aliens accused of him wanting to eat their children. But I am professional, so I am going to attempt to put that emotion into words. Watching Cats is like being inside a Lovecraftian story translated into a musical which will leave you screaming in madness above Arctic ice caps as you are dragged back to civilization. It’s like being intravenously fed LSD and then quizzed with ever more complex math problems. It’s like David Lynch telling you he cast you in a movie and then wiped your memory and he has been controlling everything that happened to you for the last 40 years. Really it’s like a lot of things, but none of those things is a movie.

I mean it is a movie (sort of). There are actors on a set (kind of). A camera is filming them as they perform (a little). Those images are placed in sequence telling a story (that’s a stretch). That’s about where the classic relationship between ‘film’ and Cats ends. It has no plot, only a series of vignettes stretched together which themselves have no plot. It has a first act which stretches nearly 90 minutes introducing characters who will not relate to one another or have anything to do after their introduction, no middle act, and a third act which appears so that the film can stop. It has its own jargon tied to the main goal of all of the characters which is never explained to the audience so there is no investment in it. It turns its tail up on anything like traditional film storytelling. 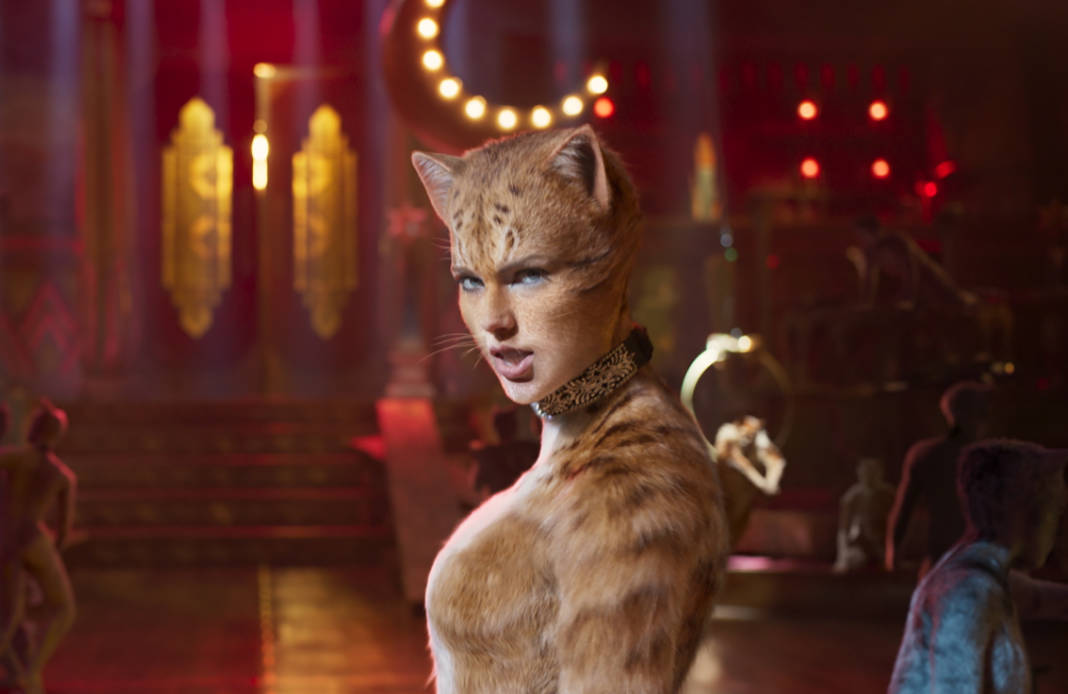 That’s not by itself a cinema sin. Traditionalism is quite restrictive and testing boundaries is how progress is made. But there is a big giant cement wall with flood lights and guards on it between testing boundaries and whatever it is Cats is doing.

The central idea is more experiential than narrative, so maybe Cats is just the biggest experimental film ever made. Or maybe it’s a psychological experiment designed to see how far an audience can be pushed before it actually leaves the theater. Either are just as likely to be true.

The experience is that of partaking in the secret cat world without really being part of it or understanding the nuances of what we’ve seen. But that’s a risky proposition at best. It’s a tall order to take a bunch of T.S. Eliot poems about individual cats and try to tie them together into something like a whole and Cats as a production eventually stopped trying in any form than the music itself, which comes across as incredibly dated beyond its most famous power ballad (The odd synthesizer-led introductory sounds like the theme song of an ’80s slasher film and its recurrence is jarring.)

On stage this might work (and apparently did) as that deals in an immediate live connection between the audience and the performers. In that environment, the decision to mask the performers as the cats they are pretending to be makes some sort of similar sense. It probably came across less like a musical and more like a theme park presentation, but there’s an audience for that. 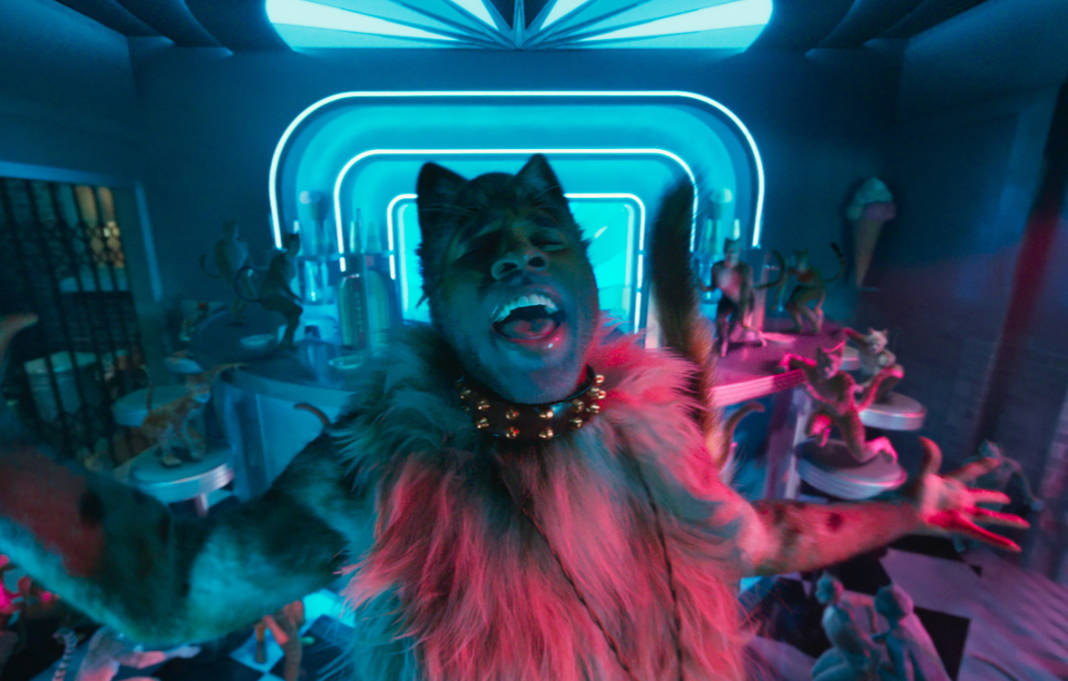 But a stage musical is not a film and the counterintuitive choices which work in one medium need altering in the translation to another. Which has been done here, but the person doing the altering seems to have been blind with the directions he was following being shouted at him by someone else in a language he did not speak.

Obviously, I’m talking about the decision to render all of the performers as humanoid cats with human facial features, body types enhanced with fur, whiskers and tails. On the one hand, it’s the logical end point of making up the characters as cats in order to bring the audience fully into the world. On the other hand it’s as logical as a fish learning to sew. How? Why?

The actual performance capture is (mostly) good; we can clearly see the actors under the effects, avoiding negative uncanny valley effects. Unfortunately, we’ve discovered what lives on the other side of that valley and it is horrifying. The furrification effects are difficult to get around when they work, much less when they don’t, especially when director Tom Hooper (Les Miserables) starts taking advantage his digital tools to inker. Idris Elba’s head is clearly transplanted onto someone else’s body for dance sequences in such a way that his face is frequently pointed in a different direction than his neck or skull. It is haunting. 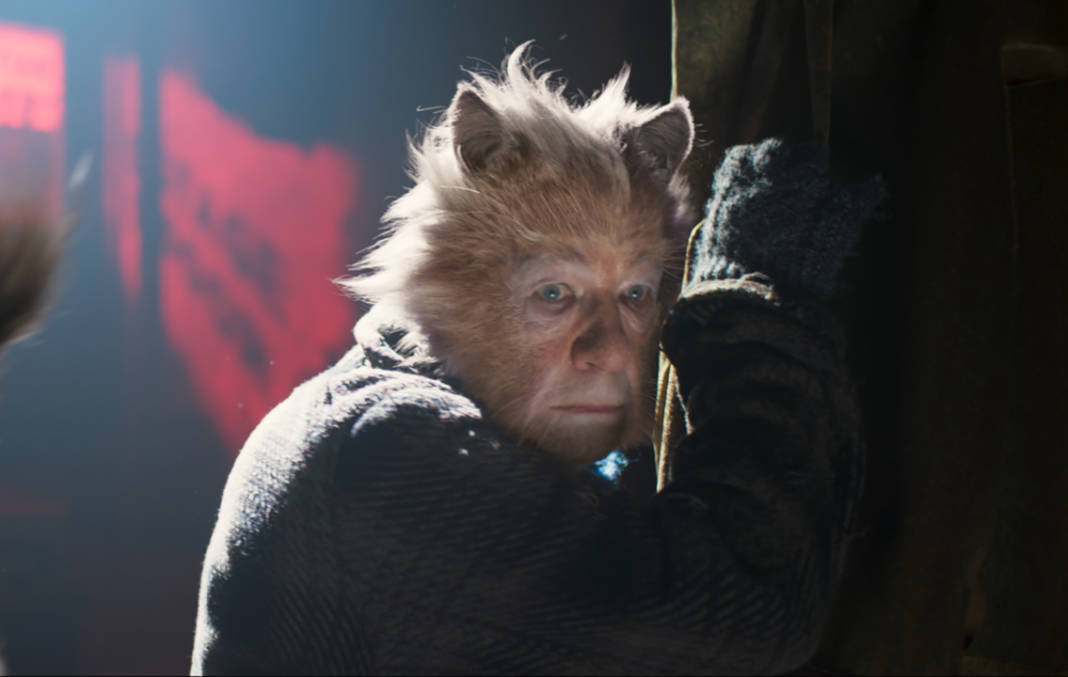 They could have just given up on the humanoid cats and focused on the songs, going the full CGI animal root a la The Lion King, but that would have negated the option for retaining the dance numbers which really are the only thing of note in this whole mess. At their peak top they stop being narrative devices and become pure elements of movement without even score to distract from them, almost like ballet adapted to the screen. It reminds at its height of the work of Michael Powell and Emeric Pressburger, especially The Tales of Hoffman, of which there hasn’t been enough replication of.

But even that made some gesture towards form in order to keep the audience’s attention. Here there are no sign posts, no guard rails, nothing to hang on to. We are like a newborn cat abandoned in a bag, begging for inclusion and having everyone turn their backs on us.

None of this matters. Cats, like God, is unknowable and will strike you down for the audacity of the attempt. Our best bet is to pack it into a crate lost deep within a warehouse next to all the other dangerous artifacts man was not meant to tamper with, before it kills us all.

Universal Pictures’ Cats opens in theaters the evening of Thursday, December 19. You can view all our coverage on the movie by clicking here.

Universal and AMC Deal to Allow PVOD After Three Weekends

Mattel and Universal Pictures are teaming up to develop the live-action motion picture Wishbone, based on the hit television series from the...
Read more
Movies

Even though the movie is not scheduled to open in theaters until Friday, July 2, 2021, Universal Pictures has brought online a new...
Read more
Movies

Twister Remake in the Works at Universal!

Universal Pictures is developing a remake to the 1996 blockbuster Twister (buy at Amazon) with Joseph Kosinski in negotiations to direct, according...
Read more
Movies

You Should Have Left Trailer with Kevin Bacon and Amanda Seyfried

Judd Apatow has a long history of “Lovable Losers” in his work. All the way from Freaks and Geeks to The 40-Year-Old...
Read more