Star Wars fans received a unique gift for Star Wars Day this year, when A Musical About Star Wars – or Why Star Wars is the Greatest Thing in the Galaxy, Much Much Better than Star Trek opened Off-Broadway in New York City. It’s a double gift for geeks like me to have my fandom collide with my love of musical theater. While not a big budget production, this fun, light-hearted show provides lots of laughs and entertainment for all. Written by Tom D’Angora, Scott Foster, and Taylor Crousore, with music and lyrics by Billy Reece, this show is an irreverent tribute to the entire Star Wars franchise, where nothing is sacred or off limits for parody, yet done so with a loving hand.

A Musical About Star Wars is a show within a show, where two socially awkward, obsessed fans of Star Wars (Taylor and Scott) create a musical about the object of their overarching passion to present at New York Comic Con. An unfortunate restraining order keeps them from their Comic Con dreams, so they rent a theater close to the Javits Center (where Comic Con is held) and hire an actress, Emily (Emily McNamara), for their female lead. Emily has an ulterior motive for joining the cast; she considers herself an ‘actor-vist” and plans to end the show before it gets off the ground, due to the perceived misogyny, stereotypical female tropes, and lack of diversity in the entire saga. Taylor and Scott make a deal with her. They will teach her why Star Wars is the greatest thing in the galaxy, and if she does not agree, they will let her break her equity contract and walk away.

It’s all fun and cosplay games from the beginning as Taylor and Scott try to educate Emily on the epic-ness of Star Wars. The clever pop score helps them explain why the saga begins with Episode IV, sing their praises to “the Creator” George Lucas, provide back story to the Star Wars characters as well as the actors themselves, explain the significance of the many spinoffs, merchandising, and ancillary products and how some of it becomes canon, and work their way up to the new movies with female heroes and diverse casts. The prequels are even brilliantly presented through a parody of one of Broadway’s greatest hits, which had the musical theater fans roaring and made one audience member say the song made her like the prequels more! 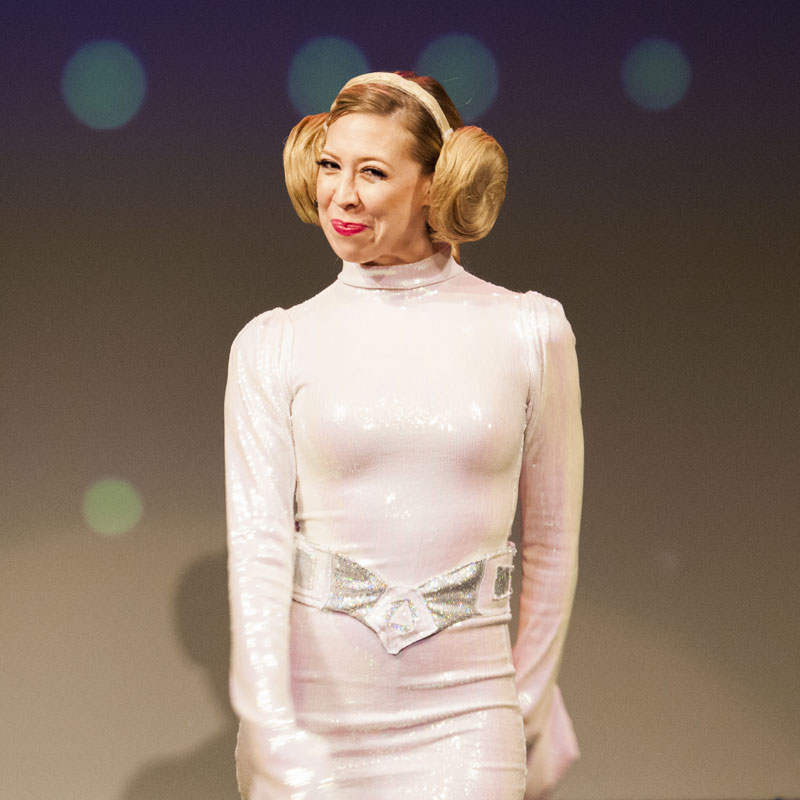 Audience members are also treated to trivia, audience participation sections, a send-up of We Are the World-type tribute songs and more. Scott and Taylor are adept at imitating Star Wars characters, managing entertaining lightsaber choreography, and knowledgeable in even some of the minutest details of the fandom. Kudos to them for their acknowledgement of the recent death of Chewbacca actor Peter Mayhew, bemoaning the possible effect on the series after the Disney acquisition, and mentioning their wish for a world where actors like Kelly Marie Tran are not bullied off social media.

The cast members are all terrific in their respective roles. Taylor and Scott are totally believable as the awkward nerds who bonded over their love of the galaxy far, far away. I absolutely love the way they distinguished their respective viewpoints as Gen X-wingers (those who grew up with the original trilogy) and Millennial Falconers (kids who were introduced to Star Wars with the prequels.) Emily is fantastic as the female political activist who looks at the franchise through a different lens, bemoaning the sexism and lack of representation in the original films. 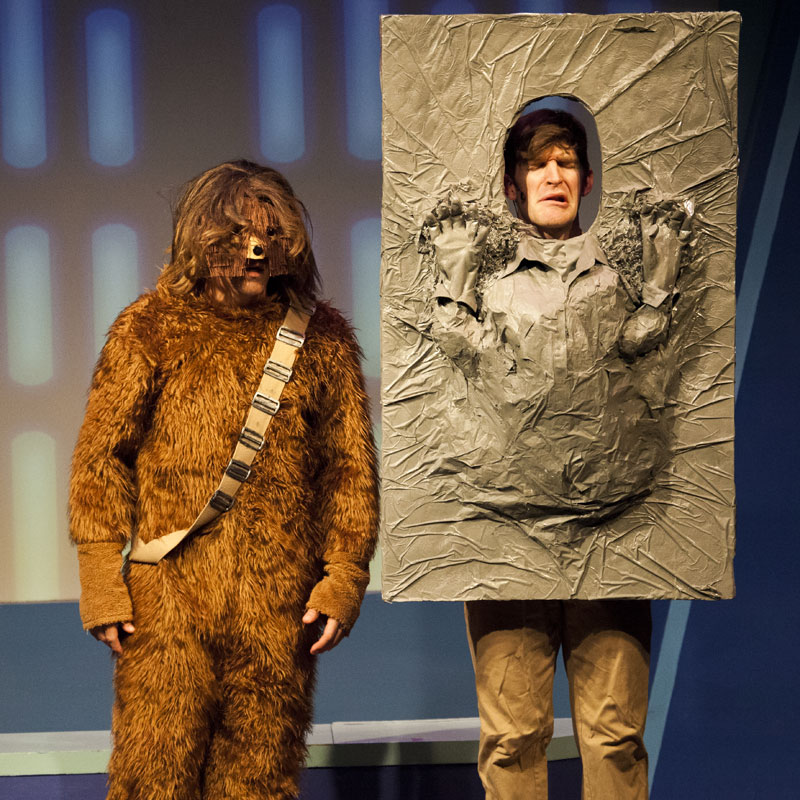 It is only through Emily learning about the newest films in the franchise that she truly warms up to the idea of staying in the show. Scott and Taylor point out that General Leia is the one constant throughout all of the movies and also get Emily to see that not only are there other strong female protagonists (Rey, and especially Vice Admiral Amylin Holdo), there are also people of color in lead roles and according to some fan theories, LGBTQ characters. The point is that as times have changed, so have the Star Wars films and we are all heading toward a brighter future.

Special thanks should be given to directors Michael and Tom D’Angora, choreographer Alex Ringler, production designer Brendan McCann and especially costume designers Brendan McCann and William Bailey for their inventive cosplay concoctions. The entire show was a well-executed professional production of an amateur cosplay show. I thought it was brilliant.

I hope that A Musical About Star Wars does become part of New York Comic Con. I cannot recommend it enough for Star Wars fans everywhere. I would also like to nominate the actors and creative team for honorary membership in the Legion of Leia for their love of the films and their creative recognition of the women who have added so much to the Star Wars saga. Well done.

And may the Force be with you.

Lucasfilm has revealed the first clip and images from Star Wars: The Clone Wars Episode 708, which will be available on Disney+ on Friday, April 10th....
Read more
Streaming

The purpose of Star Wars Thrills is to put all the Star Wars news from the week of April 3, 2020 in one location. This week,...
Read more
Streaming

Star Wars: The Clone Wars has returned for its seventh and final season on the Disney+ streaming service. In this review, we're taking a...
Read more
Streaming

Lucasfilm has revealed the first clip and images from Star Wars: The Clone Wars Episode 707, which will be available on Disney+ on Friday, April 3rd....
Read more
Movies

For a long time complex subjects have had to be dealt with in allegory and obscurity, working around their subjects due to commercial and...
Read more
Games

The purpose of Star Wars Thrills is to put all the Star Wars news from the week of March 27, 2020 in one location. This week,...
Read more
Streaming

Star Wars: The Clone Wars has returned for its seventh and final season on the Disney+ streaming service. In this review, we're taking a...
Read more
Streaming

The Terminator, Aliens and The Abyss star Michael Biehn has joined the cast of The Mandalorian Season 2, according to Making Star Wars. Though details about his character...
Read more
Streaming

Lucasfilm has revealed the first clip and images from Star Wars: The Clone Wars Episode 706, which will be available on Disney+ on Friday, March 27th....
Read more

Showtime has brought online a second official Billions trailer, which features new footage from the anticipated fifth season premiering on Sunday, May 3 at 9...
Read more

Amazon Prime Video has brought online the trailer for Homecoming Season 2, which will premiere on the streaming service on May 22, 2020. The critically-acclaimed series...
Read more
Load more