Amazon Prime Video has released the official Panic trailer, which previews the new series premiering on Friday, May 28. All ten episodes of the series will debut on the service in more than 240 countries and territories worldwide.

The Panic trailer, which provides a sneak peek at the mysterious high-stakes challenges, teen friendships and romance, also features the never before released song “Not Going Home” from global superstar, Tones and I. The alt-pop song will also be heard within the series in episode 109, and is taken from Tones And I’s debut EP, The Kids Are Coming.

The one-hour, young adult Panic series is written and created by Lauren Oliver (based on her bestselling novel – pre-order the tie-in edition). It takes place in a small Texas town, where every summer the graduating seniors compete in a series of challenges, winner takes all, which they believe is their one and only chance to escape their circumstances and make their lives better.

But this year, the rules have changed – the pot of money is larger than ever and the game has become even more dangerous. The players will come face to face with their deepest, darkest fears and be forced to decide how much they are willing to risk in order to win.

Olivia Welch (Fear Street) as “Heather”: Heather is a talented writer, but she knows that in real life, you can’t imagine yourself to a happy ending. A self-proclaimed pragmatist, she intends to go through her accounting certification, in the hopes of building a stable life as soon as possible.

Jessica Sula (Split) as “Natalie”: Natalie’s aspirations include a move to California and the fulfillment of her dead mother’s dream to become an actress. The loftiness of her ambitions and her disregard for practicalities belie the discipline and perceptiveness born of growing up a Deputy Sheriff’s daughter.

Mike Faist (West Side Story) as “Dodge Mason”: Dodge Mason is the new kid in town, and floated almost invisibly through his senior year at the high school. Uniformly level-headed–almost detached–Dodge’s tolerance for danger is perhaps a product of his background in saddle bronc…or symptomatic of a much deeper strain of violence inside of him.

Ray Nicholson (Now Is Everything) as “Ray Hanrahan”: Swaggering, obnoxious, and provocative, Ray comes from a long line of criminals and trailer trash–and is more than happy to be the public bearer of that proud heritage. Having been told his whole life that he is going no where, Ray’s strength comes in nihilistic form–no future means no fear of what’s coming.

Camron Jones (grown-ish) as “Bishop”: Bishop is a Good Kid–anyone in Carp would tell you that. Affable, funny, sweet; an all-around athlete and a solid A/A- student; Bishop fulfills the expectations of both the community and his father, the Chief Justice of the County Court. But a lifetime of inherited pressure has begun to take its toll.

Enrique Murciano (Bloodline) as “Sheriff Kean”: A man who wears the mantle of his office heavily, Sheriff Kean is haunted by loss, alienated from his grieving wife, and single-mindedly focused on the one thing he can control: putting a stop to the game.

Moira Kelly (One Tree Hill) as “Laura Kean”: Sheriff Kean’s Wife. Mired in grief after the death of her son, Laura Kean is locked in the past–and keeping secrets of her own.

Nancy McKeon (The Facts of Life) as “Jessica Mason”: Dodge’s single mom. Beautiful, fierce, a fighter. She cares about her two children more than anything and has uprooted the family’s life to pursue justice for her daughter, victim of a hit-and-run that placed her in a wheelchair for life. She is having an affair with Sheriff Kean.

Rachel Bay Jones (Dear Evan Hansen) as “Sherri Nill”: A single mother at seventeen, Sherri has been roughed around by life and seeks refuge in the wrong places–notably booze, drugs, and bad men. She does love her children but just doesn’t know how to take care of them.

Her temper, hardness, and volatility disguise her vulnerability and belief in her unworthiness. 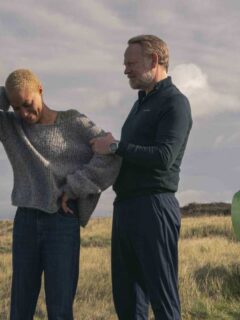 Next
AMC Sets The Beast Must Die Premiere Date and Greenlights Moonhaven
Click here to cancel reply.
Disclaimer: This post may contain affiliate links through which we earn a commission if you decide to make a purchase, at no cost to you. As an Amazon Associate, we earn from qualifying purchases.
Amazon Prime Day 2021 is June 21 and 22! Click here for the deals.