For the second day of its Geeked Week, Netflix shared new updates for Another Life Season 2, Cowboy Bebop, Locke & Key Season 2, The Sandman, and The Umbrella Academy Season 3.

Separate from Geeked Week, the streaming service also announced The Pentaverate, a limited series from Mike Myers, and the premiere date for I Think You Should Leave with Tim Robinson Season 2.

In the first season, when a mysterious alien Artifact lands on Earth, Commander Niko Breckinridge (Sackhoff) has to lead humanity’s first interstellar mission to its planet of origin, while her husband (Justin Chatwin) tries to make first contact with the artifact back on Earth.

Another Life explores the miracle of life, how precious life is in a universe mostly empty of it, and the lengths we will go to protect the ones we love.

Fans of the beloved anime series got some big news: iconic composer Yoko Kanno will be making original music for the Netflix live-action adaptation. Watch the announcement below.

Based on the worldwide phenomenon from Sunrise Inc., Cowboy Bebop is the jazz-inspired, genre-bending story of a rag-tag crew of bounty hunters on the run from their pasts, as they hunt down the solar system’s most dangerous criminals. They’ll even save the world… for the right price.

Are you ready to go back in the house? The cast reunited to announce the show’s Season 2 October return date and share several first-look images.

After their father is murdered under mysterious circumstances, the three Locke siblings and their mother move into their ancestral home, Keyhouse, which they discover is full of magical keys that may be connected to their father’s death. As the Locke children explore the different keys and their unique powers, a mysterious demon awakens — and will stop at nothing to steal them.

From Carlton Cuse (Lost, Bates Motel) and Meredith Averill (The Haunting of Hill House), Locke & Key is a coming-of-age mystery about love, loss, and the unshakable bonds that define family. Locke & Key on Netflix is the television adaptation of the best-selling comic book series by Joe Hill and Gabriel Rodriguez for IDW Entertainment.

Creator and showrunner Steve Blackman unveiled all 10 episode titles for the upcoming third season of the hit superhero series. In the second season of The Umbrella Academy, five warned his family (so, so many times) that using his powers to escape from Vanya’s 2019 apocalypse was risky. Well, he was right – the time jump scatters the siblings in time in and around Dallas, Texas.

Over a three year period. Starting in 1960. Some, having been stuck in the past for years, have built lives and moved on, certain they’re the only ones who survived. Five is the last to land, smack dab in the middle of a nuclear doomsday, which — spoiler alert! — turns out is a result of the group’s disruption of the timeline (déjà vu, anyone?)

Now the Umbrella Academy must find a way to reunite, figure out what caused doomsday, put a stop to it, and return to the present timeline to stop that other apocalypse. All while being hunted by a trio of ruthless Swedish assassins.

A rich blend of modern myth and dark fantasy in which contemporary fiction, historical drama and legend are seamlessly interwoven, The Sandman follows the people and places affected by Morpheus, the Dream King, as he mends the cosmic — and human — mistakes he’s made during his vast existence.

Netflix today announced the previously-untitled, half-hour Mike Myers project will be the new limited series, The Pentaverate. Netflix has started production on the limited comedy series produced by and starring Mike Myers, in which he plays seven brand new characters.

What if a secret society of five men has been working to influence world events for the greater good since the Black Plague of 1347? As this new series begins, one unlikely Canadian journalist finds himself embroiled in a mission to uncover the truth and just possibly save the world himself. Remember, the Pentaverate must never be exposed!

I THINK YOU SHOULD LEAVE WITH TIM ROBINSON

The critically-acclaimed and hilariously absurdist sketch comedy series I Think You Should Leave with Tim Robinson returns for a second season on July 6, 2021. Creators and writers Tim Robinson and Zach Kanin bring their distinct comedy style and observational humor to the forefront, continuing to poke fun at life’s most bizarre and mundane situations.

Previous
Hathaway, Rahim, Tomei and Broderick to Star in She Came to Me 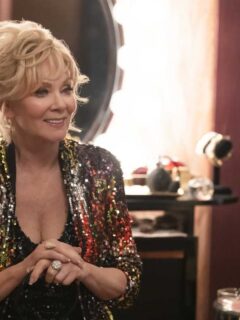 Next
Hacks Season 2 Gets the Green Light
Click here to cancel reply.
Disclaimer: This post may contain affiliate links through which we earn a commission if you decide to make a purchase, at no cost to you. As an Amazon Associate, we earn from qualifying purchases.
Amazon Prime Day 2021 is June 21 and 22! Click here for the deals.