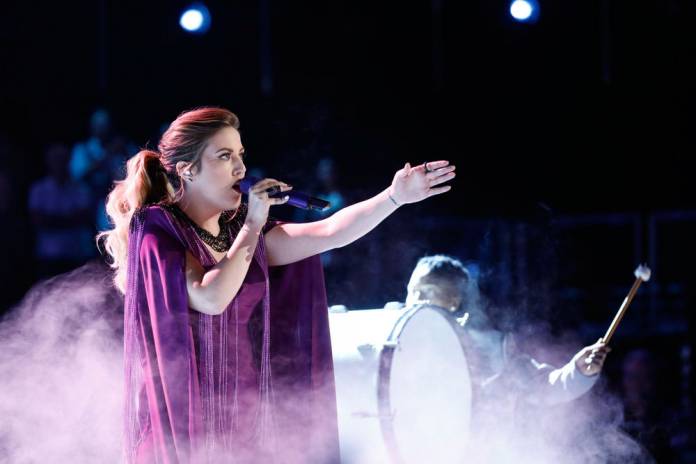 The Voice Season 16 finale is here! Blake Shelton has three singers in competition: Andrew Sevener, 22, Gyth Rigdon, 24, and Dexter Roberts, 27. John Legend has frontrunner Maelyn Jarmon, 26. The remaining four contestants of Season 16 performed one last time before American crowns a new winner tomorrow night. Each finalist took the stage three times to belt out one new original song, a solo cover, and a duet with their coach. Adam Levine and Kelly Clarkson do not have a contestant in the finale.

Here’s how the night went down.

Jarmon, who was the first artist on Legend’s team, was up first and kicked things off with her original song “Wait for You,” which is a song about the distance between her and her boyfriend.

“I believe you are the person who should be winning this thing, it has nothing to do with any coaches or anyone else,” Adam Levine gushed. “It was flawless per usual and I feel so blessed to work with you,” her coach John Legend said.

Andrew Sevener and Blake Shelton were up next. The two delivered a lively version of “All Right Now” and wowed the audience.

Roberts got a standing ovation from all four coaches and brought his mom to tears with “Anything Goes.” “I think you’re my favorite,” Kelly Clarkson said. “Greatness is genreless and you have that in spades my friend,” Levine added. “He literally pours his heart and soul in every performance,” Shelton chimed in. 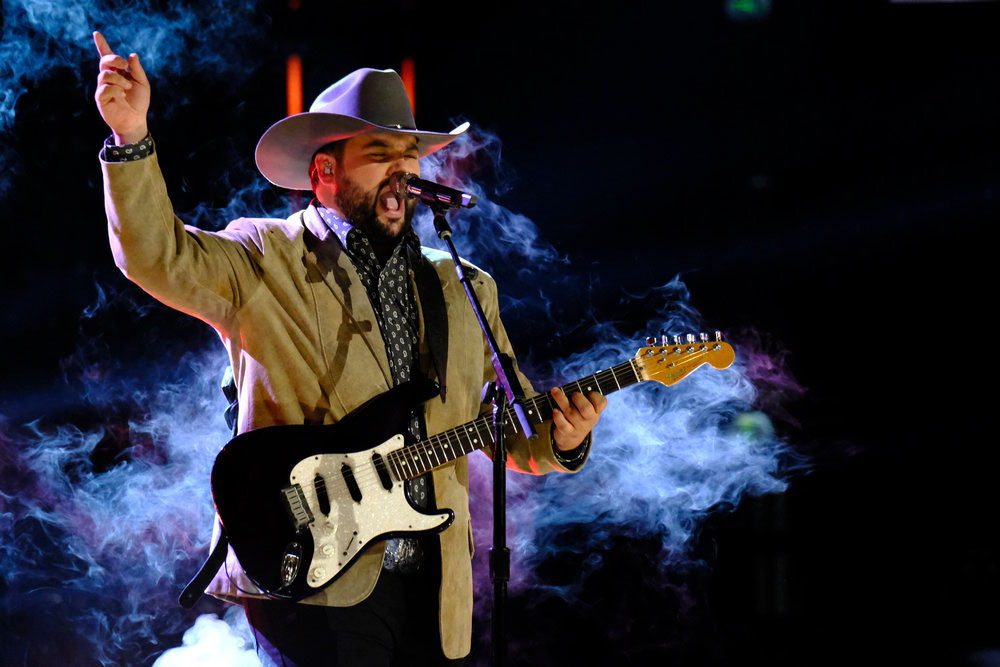 Shelton took the stage again, this time with Rigdon. The duo performed “Take It Easy” by The Eagles.

Next up was Sevener debuting his original song “Rural Route Raising.” “You’ve really been in the zone, especially with these last two weeks,” Legend said. “Andrew and I were talking in the studio and I told him, ‘I hope you like this song because you’re probably going to sing it for the rest of your life,'” Shelton said.

Legend and Jarmon did their duet with “Unforgettable” with a full orchestra. The “All of Me” singer revealed he won a competition performing this song and Jarmon said it’s a dream come true to sing with Legend.

Rigdon went straight into his solo cover with “Once in a Blue Moon” by Earl Thomas Conley, who passed away just a few weeks ago.

“That song was really challenging and you handled it so well,” Legend said. “You did a great job honoring Earl,” Shelton raved. 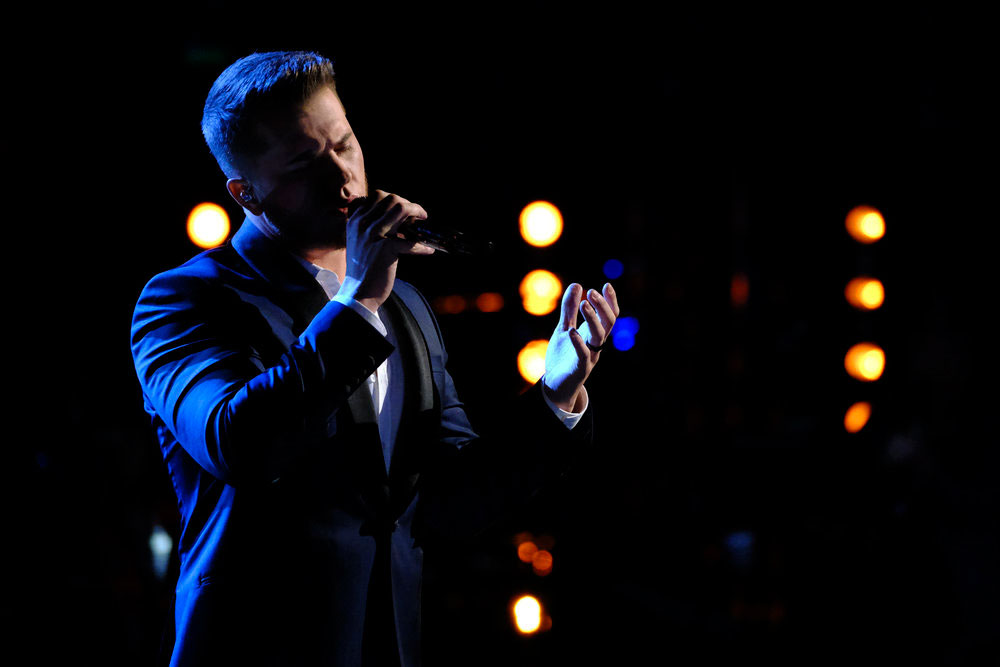 Roberts then debuted his original song “Looking Back,” which earned great praise from the coaches.

“I love your voice. I think you’re so talented and you’re so authentic. You seem like you’d get a beer with anyone no matter if they’re famous or not and I think that will really show,” Clarkson told him. “You’re the most ready of anybody to become a superstar. You’re ready!,” Shelton said.

Sevener was a one chair turn, but crushed it on every performance tonight. He covered “Lips of an Angel” and the coaches loved it!

“What! You’re so good! That was great. Andrew, that’s my favorite,” Clarkson excitedly said.

“If I had to pick among Team Blake, I feel like I would pick Andrew,” Legend admitted.

Shelton said, “I don’t know what’s happening right now, but this is your night. What perfect timing to do that. You’re killing it.”

It was a night of country and a busy one for Shelton. He performed with all three of his contestants and did “Hard Workin’ Man” by Brooks & Dunn for the final duet of the night with Roberts. 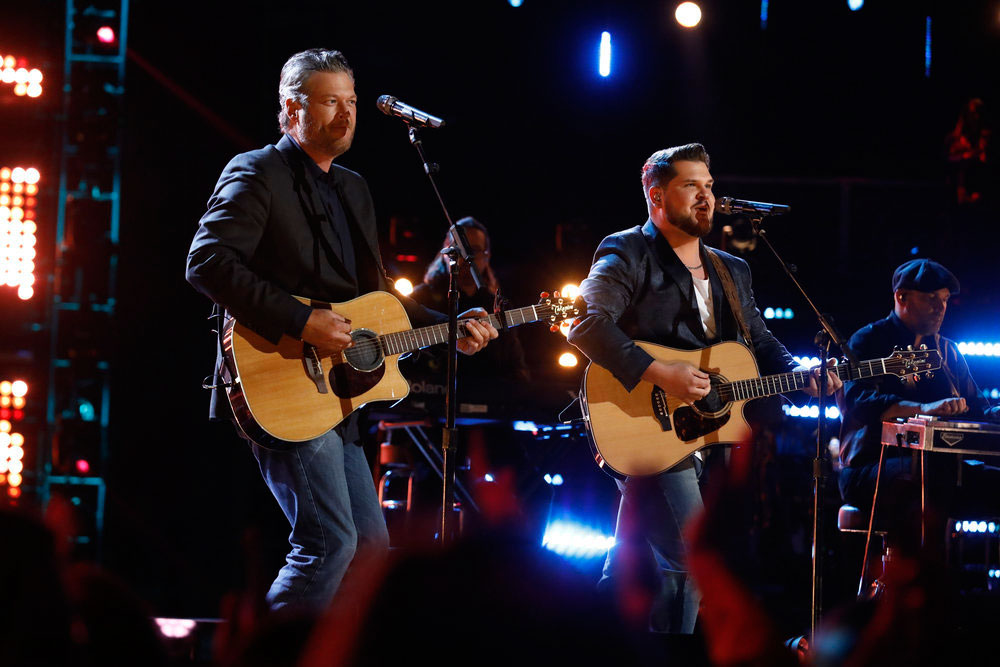 Rigdon performed his song “Proof I’ve Always Loved You.” He told Shelton in the taped package, “This is a song I’ve saved in my back pocket for a long time. When I wrote it my wife and I were just starting to date and it just flew onto the paper,” Rigdon revealed.

“You really do have it all. It’s almost like you were born to me in this moment. It took me a minute–I’m not going to lie. I think you’re meant to be here,” Levine confessed.

“You’re the total package. You could win this thing!,” Shelton exclaimed.

Jarmon closed the show with a beautiful version of Leonard Cohen’s “Hallelujah,” and Legend on his feet cheering her.

“That was insane. I don’t know how it will be impossible for you not to win the show. You are an angel from heaven,” Levine said.

“It was transporting, transfixing–all the things you want music to be,” Legend said before he told America to vote for her.

Tomorrow night will be a star studded-night with Taylor Swift, One Republic, The Jonas Brothers, BTS, Toby Keith and more.

To see who American chose as the next The Voice winner, tune into NBC at 9pm/8 central.

Previous articleVanCamp and Brühl May Return for The Falcon and The Winter Soldier Series
Next articleThe New Downton Abbey Trailer Has Arrived!

The NBC fall lineup was announced today and will include the anticipated season debuts of the network's hit dramas the week of...
Read more
TV

This Is Us stars Mandy Moore and Justin Hartley will co-host NBC’s Red Nose Day Special on Thursday, May 21, at 9...
Read more

Huluween is back and spookier than ever! Horror fans can celebrate the third year of Hulu's annual Halloween event with a full...
Read more

Arrow Video has announced their new subscription-based Arrow platform, available in the US and Canada beginning October 1. Below, we've got your...
Read more

From Hill House to Bly Manor: Behind the Scenes Video from Netflix

Sacrifice Series Gets the Green Light from BET

BET has announced that the Sacrifice series, starring Paula Patton (Precious, Traffik), has been picked up. The movie, which served as a...
Read more
Load more