This week, Sony Pictures updated the release schedule for three of its upcoming genre movies, including Venom: Let There Be Carnage, Resident Evil: Welcome to Raccoon City, and Uncharted.

First up is Venom: Let There Be Carnage (Columbia Pictures), which moved from September 17, 2021 to September 24. It’s a good move, as it puts the Venom sequel two weeks after Marvel Studios’ Shang-Chi and the Legend of the Ten Rings, which opens on September 3.

Venom: Let There Be Carnage will screen in 3D, IMAX and premium large format theaters. It follows the 2018 original, which grossed over $850 million worldwide and officially launched Sony Pictures’ own Universe of Marvel Characters.

Once the booming home of pharmaceutical giant Umbrella Corporation, Raccoon City is now a dying Midwestern town. The company’s exodus left the city a wasteland… with great evil brewing below the surface. When that evil is unleashed, the townspeople are forever… changed… and a small group of survivors must work together to uncover the truth behind Umbrella and make it through the night.

Returning to the terrifying roots of the massively popular Resident Evil franchise, fan and filmmaker Johannes Roberts brings the games of the billion dollar franchise and the most successful video game adaptation in history to life for a whole new generation of fans.

Written and directed by Roberts, Resident Evil: Welcome to Raccoon City is produced by Robert Kulzer, James Harris, and Hartley Gorenstein. The executive producers are Martin Moszkowicz and Victor Hadida.

And last but certainly not least, Uncharted (Columbia Pictures) will now screen in IMAX and premium large format theaters starting on February 18, 2022, a week later than the previously-announced February 11.

Previous
The 1619 Project Docuseries to Debut on Hulu 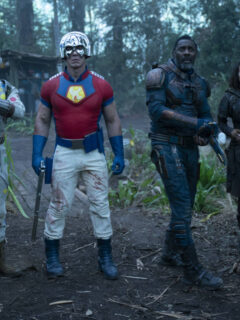 Next
New Suicide Squad Trailer with More Footage!
Click here to cancel reply.
Disclaimer: This post may contain affiliate links through which we earn a commission if you decide to make a purchase, at no cost to you. As an Amazon Associate, we earn from qualifying purchases.
Get The FREE LEGO® Life Magazine! LEGO® Life Magazine is fun for kids 5-10 years old.