AMC Networks’ Shudder has announced the movie and TV highlights for next month. The Shudder April 2020 lineup celebrates the “Halfway to Halloween Month.”

Shudder is offering its biggest month of non-October programming ever, at a time when many people are turning to streaming to help entertain them while they’re social distancing and quarantining.

CURSED FILMS (Premieres April 2)
Cursed Films is a five-part documentary series from writer/director Jay Cheel (How to Build a Time Machine) exploring the myths and legends behind some of Hollywood’s notoriously “cursed” horror film productions. From plane accidents and bombings during the making of The Omen, to the rumored use of real human skeletons on the set of Poltergeist, these stories are legendary… but what’s real and what’s myth?

Cursed Films recounts the horrifying events that haunted these productions through interviews with experts, witnesses and the cast, directors and producers who lived through them, including Richard Donner, Linda Blair, Michael Berryman, Lloyd Kaufman, Kane Hodder, Gary Sherman, Eileen Dietz, Mitch Horowitz. Were these films really cursed, as many believe, or just the victims of bad luck and bizarre circumstances? A Shudder Original Series. Also available on Shudder Canada and Shudder UK.

Proving once again that “the drive-in will never die,” iconic horror host and exploitation movie aficionado Joe Bob Briggs is back with an all-new season of weekly Friday night double features streaming live exclusively on Shudder. Over the course of ten episodes, The Last Drive-In series will offer an eclectic selection of movies running the gamut from horror classics to obscurities and foreign cult favorites along with the occasional surprise guest. A Shudder Original Series. Also on Shudder Canada; some episodes also available on demand on Shudder UK.

WOLF CREEK Season 2 (Premieres April 30 – full season binge)
In the second season of the hit horror series, a group of international tourists embark on the Outback adventure of a lifetime, but a chance encounter with trigger-happy pig hunter Mick Taylor (John Jarratt) sets them on a journey none of them could have imagined. With Tess Haubrich (Alien: Covenant), Matt Day (Rake), Ben Oxenbould (The Code), Laura Wheelwright (Animal Kingdom), Charlie Clausen (Home & Away) Stephen Hunter (The Leftovers) and Chris Haywood (Muriel’s Wedding). A Shudder Exclusive Series. Also available on Shudder Canada and Shudder UK.

THE ‘FRIDAY THE 13TH’ COLLECTION (Available 4/1)
Jason takes Shudder as we present the first eight films in one of the most beloved and successful franchises in horror history. If that’s not enough, go behind the scenes with documentaries Crystal Lake Memories: The Complete History of Friday the 13th and Smoke and Mirrors: The Story of Tom Savini. Ki ki ki, ma ma ma…

HALFWAY TO HALLOWEEN (Available 4/1)
Spooky season is too much fun to celebrate just once a year, so Shudder is unleashing Halloween in April with this curated collection of All Hallows Eve-themed films and series.

Featuring The Exorcist, Halloween, Halloween 4, Halloween 5, Haunt, Hell House LLC, Rob Zombie’s 31, Spookers, the Creepshow series (episode “All Hallows Eve”) and the fan-favorite streaming jack-o-lanterns The Ghoul Log and Return of the Ghoul Log, along with Haunters: The Art of the Scare and Tales of Halloween, both starting Apr. 6, and Extremity starting Apr. 20. (Select titles also available on Shudder Canada and Shudder UK.)

EVERY FRIDAY IN APRIL FROM 3-4PM ET
Shudder has the best, hand-selected collection of horror movies around, but sometimes you need a little extra help picking exactly which great slasher, ghost story, giallo or monster movie to watch next. As a Halfwayto Halloween treat, Shudder’s head curator, Samuel Zimmerman, will be offering callers live, personalized picks for what to watch.

Movie lovers from around the world are invited to call Sam (via a new number to be announced) every Friday in April from 3-4pm ET and tell him about their mood or taste. From that information, Sam will use his horror knowledge to pick a film from Shudder’s vast library custom-suited for them. Call volume is expected to be high, so if you get a busy signal please keep trying. We can’t promise every call will be answered, but Sam will get to as many as he can during each hour. While the recommendations are provided for free, please note that normal phone and long-distance charges may apply.

THE FRIDAY THE 13TH COLLECTION (see above for details)

THE EXORCIST (Director: William Friedkin)
When a charming 12-year-old girl takes on the characteristics and voices of others, doctors say there is nothing they can do. As people begin to die, the girl’s mother realizes her daughter has been possessed by the devil—and that her daughter’s only possible hope lies with two priests and the ancient rite of demonic exorcism. One of the best and most influential horror movies ever made. Starring: Ellen Burstyn, Max von Sydow, Linda Blair, Jason Miller

CURSED FILMS: EP.1 ‘THE EXORCIST’ (see above for details)

HAUNTERS: THE ART OF THE SCARE (Director: Jon Schnitzer)
Explore the rise of terror as entertainment by going behind-the-screams and into the lives of Shar Mayer, legendary scare actor, Donald Julson, a traditional boo-scare maze designer, and the infamous Russ McKamey, as he creates the most controversial full-contact haunt of all time in this documentary about how family-friendly haunted houses for Halloween have spawned a growing subculture of extreme horror simulation. With Jason Blum, McKenzie Westmore, the Soska Sisters, Slash (Also available on Shudder Canada)

ABSENTIA (Director: Mike Flanagan)
As Tricia prepares to declare Daniel legally dead, she encounters a mysterious tunnel and a terrified man inside. Soon after, Daniel returns, shaken and bloodied—and scared to death of the tunnel. What happened, and what secrets does the tunnel hold? From Mike Flanagan, the director of Doctor Sleep and The Haunting of Hill House. Starring: Katie Parker, Katie Bell, Dave Levine

ELVIRA: MISTRESS OF THE DARK (Director: Phil Rubenstein)
Upon arriving in a small town where she has inherited a rundown mansion, the famous horror hostess must battle her evil uncle and townspeople who want her burned at the stake.
Starring: Cassandra Peterson, Phil Rubenstein, Larry Flash Jenkins (Also available on Shudder Canada)

WE ARE WHAT WE ARE (Director: Jim Mickle)
The Parkers seem to be a wholesome family but when tragedy strikes and sisters Iris and Rose are forced to assume terrifying responsibilities, the local authorities begin to uncover clues to a horrible truth that the Parkers have hidden for years. Starring Michael Parks, Kelly McGillis and Julia Garner.

EXTREMITY (Director: Anthony DiBlasi)
Allison is an emotionally troubled young woman who believes that confronting her past trauma might be a means of exercising her demons. She signs up for a trip to Perdition, an exclusive haunt that promises absolute, unadulterated terror, but the most frightening thing on display will prove to be Allison’s own twisted psyche. Starring: Chad Rook, Dana Christina, J. LaRose

VOICE FROM THE STONE (Director: Eric D. Howell)
A haunting thriller set at an isolated castle in 1950s Tuscany. Verena (Game of Thrones’ Emilia Clarke) is a determined young nurse who is hired to help the mute young heir within. But the more she observes him, the more Verena becomes convinced he has fallen under the spell of a powerful and otherworldly persona trapped in the villa’s stone walls, one that seems to be rapidly entwining with her own. Starring: Emilia Clarke (Game of Thrones), Marton Csokas, Caterina Murino

0.0Mhz (see above for details)

THE SIREN (Director: Perry Blackshear)
Tom rents a cabin on a secluded lake marked by a local legend of a lovelorn spirit who haunts the surrounding woods and drowns anyone she encounters. Drawn to her immediately, Tom knows he has found his soulmate in the seemingly human Nina, who must battle to repress her demonic instincts when she feels the same towards him. Starring: Margaret Ying Drake, MacLeod Andrews, Evan Dumouchel (Also available on Shudder Canada)

TO HELL AND BACK: THE KANE HODDER STORY (Director: Derek Dennis Herbert)
Overcoming a dehumanizing childhood and a near-death burn accident, Hodder worked his way up through Hollywood, leading to his ultimate rise as Jason Voorhees in the Friday the 13th series. After decades of watching Kane Hodder on screen, get ready to meet the man behind the mask in a gut-wrenching but inspiring story about one of cinema’s most vicious monsters. Starring: Kane Hodder, Bruce Campbell, Danielle Harris, Robert Englund, Cassandra Peterson 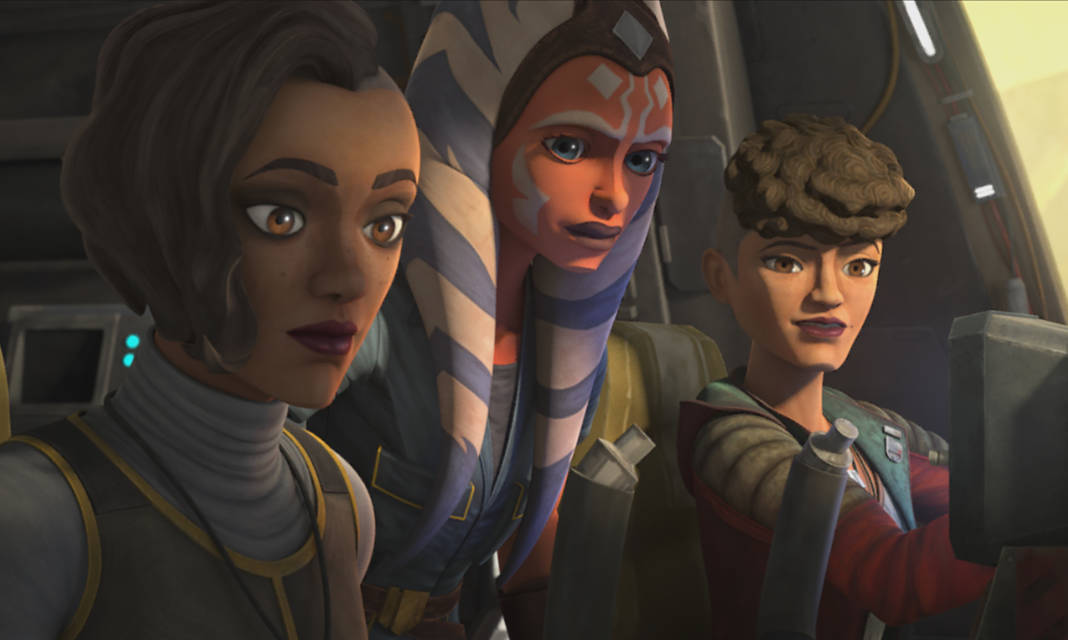 Next
Star Wars: The Clone Wars - Deal No Deal Review
Click here to cancel reply.
Disclaimer: This post may contain affiliate links through which we earn a commission if you decide to make a purchase, at no cost to you. As an Amazon Associate, we earn from qualifying purchases.
Amazon Prime Day 2021 is June 21 and 22! Click here for the deals.