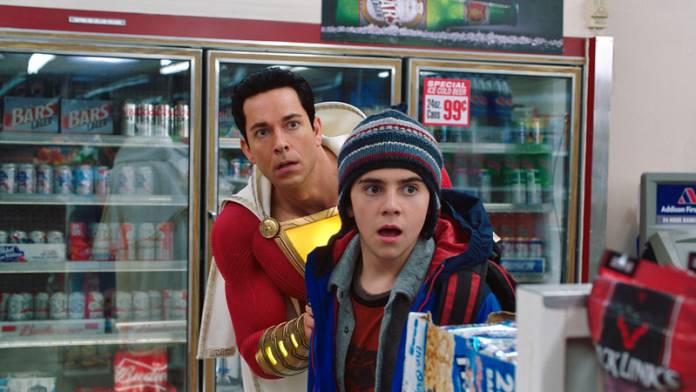 Warner Bros. Pictures is not done this week scheduling its upcoming movies. Following The Matrix 4, The Flash, and Mortal Kombat announcements, the studio has now also set the Shazam 2 release date. You can expect the sequel to the DC film on April 1, 2022, and that’s no joke. While no other movie is schedule for that date, it’s just a week before the Spider-Man: Into the Spider-Verse sequel swings into theaters.

In other release date news, Warner Bros. has also pushed back the Sesame Street feature film from June 4, 2021 to January 14, 2022. And Focus Features will release Never Rarely Sometimes Always in limited theaters on March 13, 2022.

The first Shazam! movie opened in theaters on April 5, 2019 and grossed $364.6 million worldwide, with $140.4 million coming from North America and $224.2 million from overseas markets. It is an origin story that stars Zachary Levi as the titular DC super hero, along with Asher Angel as Billy Batson, and Mark Strong in the role of super-villain Dr. Thaddeus Sivana. David F. Sandberg directed from a script by Henry Gayden and Peter Safran produced.

Written and directed by Eliza Hittman, Never Rarely Sometimes Always is an intimate portrayal of two teenage girls in rural Pennsylvania. Faced with an unintended pregnancy and a lack of local support, Autumn (Sidney Flanigan) and her cousin Skylar (Talia Ryder) embark across state lines to New York City on a fraught journey of friendship, bravery and compassion

Warner Bros 2021 Movies to All Debut on Both HBO Max and in Theaters!

In huge breaking news, it was announced today that all the Warner Bros 2021 movies will be released both on HBO Max and in...
Read more
Movies

James Gunn revealed today on his social channels that Sylvester Stallone has joined the cast of The Suicide Squad, which is scheduled for an...
Read more

Apple TV+ has ordered a new six-part documentary series from Box to Box Films and the World Surf League (WSL) that will provide a...
Read more

The purpose of Star Wars Thrills is to put all the Star Wars news from the week of December 4, 2020 in one location. This week,...
Read more

Over 60 Hours of Showtime Series Are Free Throughout the Holidays

Over 60 hours of Showtime series have been released for free online sampling on streaming platforms and On Demand to celebrate the holiday season. Among...
Read more
Load more