Warner Bros. Pictures has revealed the trailer for action thriller Reminiscence, starring Hugh Jackman, Rebecca Ferguson and Thandiwe Newton. You can watch the trailer using the player below and you’ll find the new poster underneath!

Warner Bros. has launched a viral site advertising the company Memory Lane as well. Memory Lane has a commercial, but Bannister & Associates cuts in at the very end of the video to say that you can reminisce for half the price and twice the security. You can call the number to make an appointment.

In the movie, Jackman plays Nick Bannister, a private investigator of the mind, who navigates the darkly alluring world of the past by helping his clients access lost memories. Living on the fringes of the sunken Miami coast, his life is forever changed when he takes on a new client, Mae (Ferguson).

A simple matter of lost and found becomes a dangerous obsession. As Bannister fights to find the truth about Mae’s disappearance, he uncovers a violent conspiracy, and must ultimately answer the question: how far would you go to hold on to the ones you love?

Lisa Joy (Westworld) makes her feature film directing debut with Reminiscence and directs from her own original screenplay.

The movie is set for release nationwide in theaters on August 20, 2021 and will be available on HBO Max in UHD, HDR10, Dolby Vision and Dolby Atmos on supported devices for 31 days from theatrical release.

Reminiscence is rated PG-13 for strong violence, drug material throughout, sexual content and some strong language.

What do you think about the Reminiscence trailer? Are you going to watch the movie in theaters or on HBO Max? Let us know your thoughts in the comments below! 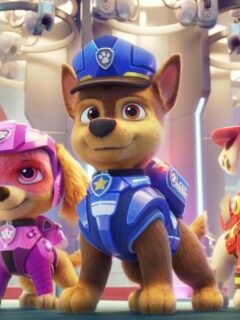 Next
PAW Patrol: The Movie Trailer and Adam Levine Song
Click here to cancel reply.
Disclaimer: This post may contain affiliate links through which we earn a commission if you decide to make a purchase, at no cost to you. As an Amazon Associate, we earn from qualifying purchases.
Try Paramount+ for free for 1 month! Click here for details.