Ivin directed the short film Cracker Bag, which won the Palme d’Or at Cannes, and Last Ride. His credits in television include Puberty Blues, A Beautiful Lie, Safe Harbour, and The Cry.

The screenwriters for Penguin Bloom are Shaun Grant and Harry Cripps. Grant wrote an episode of Mindhunter, Jasper Jones, Deadline Gallopoli and The True History of the Kelly Gang, in which he also appeared as an actor.

Cripps has written The Letter for the King, Bilby, and the series Supernova and Flat Chat. He’s also written The Dry, which is in post production and Tiger’s Apprentice, which is currently filming.

Penguin Bloom is based on the book by Cameron Bloom and Bradley Trevor Grieve. The book was published back in 2017. You can check it out on Amazon here.

The production companies on board include Screen Australia Presents in Association with Endeavor Content Roadshow Films and Create NSW A Made Up Stories, Jam Tart Films, and Broadtalk Production.

Here’s the synopsis for Penguin Bloom: In 2013, Samantha Bloom (two-time Academy Award nominee Naomi Watts), her husband Cameron (The Walking Dead’s Andrew Lincoln) and their three sons left their home in Australia for a holiday in Thailand. While enjoying a view, Sam fell off of a rooftop due to what was later determined to be a rotted railing…breaking her vertebrae in two places.

Paralyzed from the chest down, Sam — a lifelong outdoorswoman, surfer, and traveler —was unrecognizable to herself, and spent long months in a depression that made her question who she could be in the world and in her own family.

A year later, her children brought home a wounded baby magpie they found. Warily eyeing the black-and-white bird the kids affectionately named “Penguin,” Sam bonded with the household’s new member, beginning a process of emotional healing that surprised her husband and sons, her mother (Academy Award nominee Jacki Weaver), and herself.

Penguin Bloom tells the amazing true story of renewal that occurred when a woman whose life seemed shattered found hope and purpose in her family’s love — and in a bird on its own journey of recovery.

The producers of the film previously stated, “We all fell in love with the life-affirming nature of Sam’s story and her undeniable spirit. The emotional journey she and her family go on after Penguin enters their lives is unforgettable. We have a wonderful partner in Netflix and we’re delighted they will be bringing Penguin Bloom to audiences around the world.” 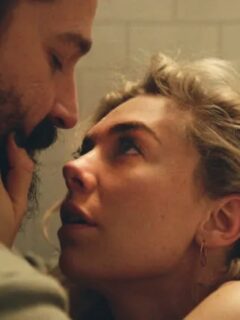 Next
New Men in Kilts: A Roadtrip with Sam and Graham Trailer and Key Art!
Click here to cancel reply.
Disclaimer: This post may contain affiliate links through which we earn a commission if you decide to make a purchase, at no cost to you. As an Amazon Associate, we earn from qualifying purchases.