New Trailer for the Without Remorse Movie

Home » New Trailer for the Without Remorse Movie

An elite Navy SEAL uncovers an international conspiracy while seeking justice for the murder of his pregnant wife in Tom Clancy’s Without Remorse, the explosive origin story of action hero John Clark – one of the most popular characters in author Tom Clancy’s Jack Ryan universe.

When a squad of Russian soldiers kills his family in retaliation for his role in a top-secret op, Sr. Chief John Kelly (Michael B. Jordan) pursues the assassins at all costs.

Joining forces with a fellow SEAL (Jodie Turner-Smith) and a shadowy CIA agent (Jamie Bell), Kelly’s mission unwittingly exposes a covert plot that threatens to engulf the U.S. and Russia in an all-out war.

Torn between personal honor and loyalty to his country, Kelly must fight his enemies without remorse if he hopes to avert disaster and reveal the powerful figures behind the conspiracy.

The film is directed by Stefano Sollima and comes from Paramount Pictures, Skydance and New Republic Pictures. The film is produced by Weed Road Pictures, The Saw Mill and Outlier Society. The screenplay is penned by Taylor Sheridan and Will Staples.

The producers are Akiva Goldsman, Josh Appelbaum, André Nemec and Michael B. Jordan.

Amazon Studios and Michael B. Jordan’s Outlier Society previously announced they are expanding on the production banner’s existing deal to now feature an exclusive overall relationship in television and a first-look film deal.

This 360-degree creative relationship with Jordan and Outlier Society will see cross-collaborations within Amazon’s vast businesses, from fashion, Audible to music and more – including the debut of Jordan in Amazon’s Alexa Super Bowl spot.

The impressive slate of Outlier Society’s upcoming projects includes the Denzel Washington-directed feature Journal for Jordan with Jordan starring and producing; Creed III, the third installment of the Rocky franchise for MGM which will see Jordan reprise his role as Adonis Creed, and DC property Static Shock. 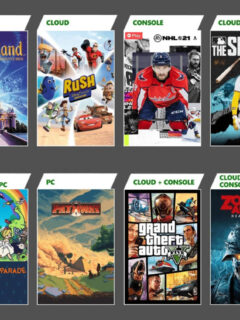 Next
Xbox Game Pass April 2021 New Games
Click here to cancel reply.
Disclaimer: This post may contain affiliate links through which we earn a commission if you decide to make a purchase, at no cost to you. As an Amazon Associate, we earn from qualifying purchases.
Get The FREE LEGO® Life Magazine! LEGO® Life Magazine is fun for kids 5-10 years old.