Watch the New Raya and the Last Dragon Trailer!

Home » Watch the New Raya and the Last Dragon Trailer!

Walt Disney Animation Studios has released the new trailer for Raya and the Last Dragon, releasing simultaneously in theaters and on Disney+ with Premiere Access on March 5, 2021. You can watch the trailer below and don’t miss our interview with the filmmakers here!

Raya and the Last Dragon travels to the fantasy world of Kumandra, where humans and dragons lived together long ago in harmony. But when an evil force threatened the land, the dragons sacrificed themselves to save humanity.

Now, 500 years later, that same evil has returned and it’s up to a lone warrior, Raya, to track down the legendary last dragon to restore the fractured land and its divided people. However, along her journey, she’ll learn that it’ll take more than a dragon to save the world – it’s going to take trust and teamwork as well.

Raya and the Last Dragon features the voices of Kelly Marie Tran (Star Wars: The Rise of Skywalker, The Croods: A New Age) as Raya, a warrior whose wit is as sharp as her blade, and Awkwafina (Crazy Rich Asians, The Farewell) as the magical, mythical, self-deprecating dragon named Sisu.

“Everything’s been taken away from Raya. She’s totally on her own. She’s got nothing left save for her father’s sword, her friend, Tuk Tuk, and a shard of something that might be magical,” explained producer Osnat Shurer.

“And she sets out into Kumandra seeking the last dragon, Sisu, with the hope of restoring peace to her land.”

But along her journey, Raya will learn that it’ll take more than a dragon to save the world. “This is Raya’s journey of learning to trust,” said director Don Hall, “after her trust was so deeply broken when she was a child.”

“You can’t really get to unity without trust,” added director Carlos López Estrada. “And for Raya, it will take trusting a group of strangers if she is ever going to have a united Kumandra.”

Raya and the Last Dragon was directed by Don Hall and Carlos López Estrada and produced by Osnat Shurer and Peter Del Vecho.

Are you looking forward to the movie? What do you think about the new trailer? Post your thoughts in the comments below! 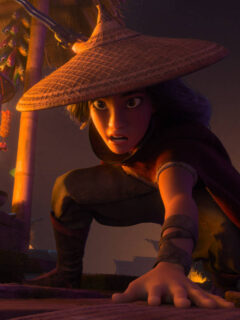 Next
Raya and the Last Dragon Filmmakers on the Anticipated Disney Movie!
Click here to cancel reply.
Disclaimer: This post may contain affiliate links through which we earn a commission if you decide to make a purchase, at no cost to you. As an Amazon Associate, we earn from qualifying purchases.