Netflix Reveals The Circle Season 2 and Selena: The Series Part 2

Netflix today has revealed a first look at both The Circle Season 2 and Selena: The Series Part 2, coming to the streaming service in just weeks from now.

The Circle Season 2 returns bigger and better, with more twists, turns, and shade thrown in all 13 episodes! A cast of eight new contestants enter The Circle, where they flirt, befriend, piss off, and compete in challenges against each other on a unique social media platform to earn the ultimate cash prize as top influencer.

With $100k on the line, will they be able to earn clout and figure out who is real and who is a catfish? The Circle is a four-week must-watch social media competition launching on April 14 and continuing with new episodes on April 21, 28, and finale on May 5th.

Selena: The Series Part 2 will release on Netflix May 4. Before she became the Queen of Tejano Music, Selena Quintanilla was a young girl from Texas with big dreams and an even bigger voice.

The two-part coming-of-age drama Selena: The Series explores the once-in-a-generation performer’s journey as a young artist, from singing small gigs in Corpus Christi with her family to becoming one of the most successful Latin artists of all time — and the years of grit and sacrifice the Quintanilla family navigated together before Selena’s meteoric rise to fame.

Now on the brink of stardom, Selena Quintanilla’s journey through the Tejano music world continues. Learning how to handle her newfound success, Selena struggles to balance, family, love, and a burgeoning career.

Part 2 of Selena: The Series chronicles the years of hard work and sacrifice the Quintanilla family navigate together as she becomes the most successful female Latin artist of all time. 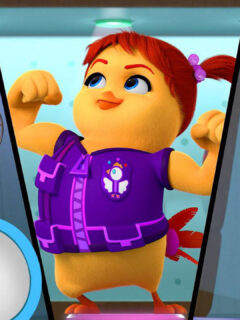 Next
The Chicken Squad Debut Set for May 14
Click here to cancel reply.
Disclaimer: This post may contain affiliate links through which we earn a commission if you decide to make a purchase, at no cost to you. As an Amazon Associate, we earn from qualifying purchases.
Get The FREE LEGO® Life Magazine! LEGO® Life Magazine is fun for kids 5-10 years old.