Filmmaker Matt Reeves has announced that The Batman movie officially wrapped filming on March 12, 2021 after a few stop-and-gos due to the pandemic. You can view the photo of the clapperboard for the last day of filming below.

Set for a theatrical release on March 4, 2022, The Batman movie originally began production in London on January 27, 2020 (see the first day’s clapperboard below!). It halted filming in March of 2020 and didn’t pick up until September, when it was stopped for another two weeks due to Robert Pattinson testing positive for COVID-19.

Director Matt Reeves (the Planet of the Apes films) is at the helm, with Robert Pattinson (Tenet, The Twilight Saga) leading The Batman cast as Gotham City’s vigilante detective, Batman, and billionaire Bruce Wayne.

The television series, to be written by Winter, is set in the world Reeves is creating for The Batman movie and will build upon the motion picture’s examination of the anatomy of corruption in Gotham City, ultimately launching a new Batman universe across multiple platforms.

The series provides an unprecedented opportunity to extend the world established in the movie and further explore the myriad of compelling and complex characters of Gotham.

Reeves’ 6th & Idaho production company will produce the series in association with Warner Bros. Television. Reeves and Emmy winner/Oscar nominee Winter (The Sopranos, The Wolf of Wall Street) will executive produce with Clark (Bird Box, Rise, Dawn, and War for Planet of the Apes).

The Gotham City police department drama, which is based on characters created for DC by Bob Kane with Bill Finger, will also be executive produced by 6th & Idaho’s Daniel Pipski (From Dusk Till Dawn: The Series) and Adam Kassan (Tales from the Loop); Rafi Crohn (Tales from the Loop) will co-executive produce. Warner Bros. International Television Distribution will distribute the series globally. 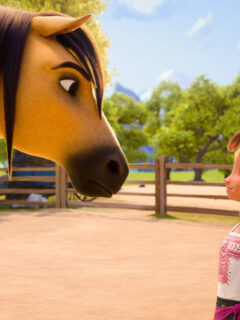 Next
Disney Channel Announces Descendants: The Royal Wedding, Saturdays
Click here to cancel reply.
Disclaimer: This post may contain affiliate links through which we earn a commission if you decide to make a purchase, at no cost to you. As an Amazon Associate, we earn from qualifying purchases.
Get The FREE LEGO® Life Magazine! LEGO® Life Magazine is fun for kids 5-10 years old.