HBO has provided us with all the info on Mare of Easttown, including the trailer, key art, photos and episode details. You can watch the Mare of Easttown trailer using the player below and you’ll find the images by scrolling down.

Starring Academy Award, Emmy and Golden Globe winner Kate Winslet (HBO’s Mildred Pierce), from creator Brad Ingelsby (The Way Back), with all episodes directed by Craig Zobel (HBO’s The Leftovers and Westworld), the seven-part limited series focused on family and community debuts Sunday, April 18 (10:00-11:00 ET/PT) on HBO and will be available to stream on HBO Max.

Ingelsby returned to his home state of Pennsylvania to write the series, an exploration into the dark side of a close community and an authentic examination of how family and past tragedies can define our present. Winslet stars as Mare Sheehan, a small-town Pennsylvania detective who investigates a local murder as life crumbles around her.

Episode 2: “Fathers”
Debut Date: SUNDAY, APRIL 25 (10:00-11:00 p.m. ET/PT)
Mare (Kate Winslet) visits a grisly murder scene before informing the victim’s enraged father. As a video from the night of the crime surfaces, Mare questions suspects in the case and gives an icy welcome to County Detective Colin Zabel (Evan Peters), who’s been called in to assist. Later, Mare bumps heads with locals and airs concerns about her grandson Drew (Izzy King) in light of her late son’s mental health struggles.

Episode 4: “Poor Sisyphus”
Debut Date: SUNDAY, MAY 9 (10:00-11:00 p.m. ET/PT)
With Mare (Kate Winslet) forced to take a backseat on the case, Colin (Evan Peters) presses a local priest about the vague circumstances that prompted his transfer to the parish. Meanwhile, an anonymous call gives Dawn (Enid Graham) hope that Katie might still be alive.

Episode 5: “Illusions”
Debut Date: SUNDAY, MAY 16 (10:00-11:00 p.m. ET/PT)
In her mandated therapy, Mare (Kate Winslet) opens up about her family’s history with mental health struggles. Meanwhile, Lori (Julianne Nicholson) tries to get to the bottom of her son’s outburst at school, and later, Mare meets with a semi-retired source to help find a possible connection to her three cases. 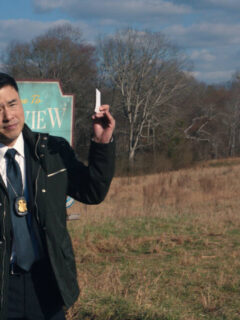 Next
Randall Park to Make Feature Directorial Debut with Shortcomings
Click here to cancel reply.
Disclaimer: This post may contain affiliate links through which we earn a commission if you decide to make a purchase, at no cost to you. As an Amazon Associate, we earn from qualifying purchases.
Get The FREE LEGO® Life Magazine! LEGO® Life Magazine is fun for kids 5-10 years old.