Masters of the Universe: Revelation Release Date and Images Revealed

Netflix and Mattel Television today revealed the release date and new images from Kevin Smith’s upcoming series Masters of the Universe: Revelation. You can check them all out below.

Part 1 of the series will premiere on the streaming service on July 23, 2021. The first part will consist of five episodes.

The CG-animated series will reimagine the Masters of the Universe classic tale with all-new storylines and a fresh take on the iconic characters. Kevin Smith spoke about the series:

“I watched all of the TV series growing up, it was everywhere in the ‘80s. These characters started off as toys and ended up becoming part of the global pop culture fabric.

“So much of this show has been possible because of the love and affection for this world at every level of production and the fandom surrounding this franchise. A big reason we got such top tier voice talent is because people genuinely want to be a part of this world.

“So many of us were touched by these stories and these characters early in our lives and were so happy to come back to Eternia. But even if you’ve never watched a single episode of the show or don’t know this universe at all, you can jump right into the story.

He also gave us a look at what we can expect to see from the series. “Narratively our show is set up as the next episode in the legacy ‘80s animated series that aired from 1983-1985. This is a continuation of that story.

“We’re playing with the original mythology and characters, and revisiting and digging deeper into some of the unresolved storylines. Visually we also made the conscious decision to lean into the Masters of the Universe line of toys for inspiration as well.

“Mattel owns this entire vast library of that artwork, so right away we wanted the show to open with classic pieces of that artwork. Mattel has been committed to this look since they first started as a toy line in the ’80s, and now we’re leaning into it and honoring it.”

The show is produced by Susua Corbin (He-Man and the Masters of the Universe) and is written by Marc Bernardin (Castle Rock, Alphas), Eric Carrasco (Supergirl), Diya Mishra (Magic the Gathering) and Tim Sheridan (Reign of Superman). The music is composed by Bear McCreary (The Walking Dead, Battlestar Galactica, Outlander).

Previous
The Trailer for Edgar Wright's The Sparks Brothers 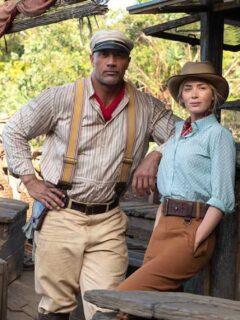 Next
Jungle Cruise to Debut in Theaters and on Disney+ with Premier Access
Click here to cancel reply.
Disclaimer: This post may contain affiliate links through which we earn a commission if you decide to make a purchase, at no cost to you. As an Amazon Associate, we earn from qualifying purchases.
Amazon Prime Day 2021 is June 21 and 22! Click here for the deals.