Insecure Season 5 to Wrap Up the HBO Series

Home » Insecure Season 5 to Wrap Up the HBO Series

“Issa has turned insecurity into an iconic form of comedy,” said Gravitt. “The show is as incisive as it is heartfelt, and it has resonated strongly with its audience because of the deeply personal work that Issa, Prentice, Melina, the cast and the writers have put into it.

“This talented team has conceived a brilliant final season for Insecure and we look forward to having many more stories to tell with this singular group of collaborators.”

The series stars Emmy, Golden Globe and NAACP Image Award nominee Issa Rae, who heads the ensemble cast, and the new season will continue to follow our favorite characters as they evaluate their relationships, both new and old, in an effort to figure out who and what comes with them in this next phase of their lives.

Insecure Season 5 is scheduled to begin production later this month and is set to debut later this year.

When the fifth season was confirmed last year, Gravitt said: “We’re thrilled that Issa, Prentice, and the whole Insecure team will be getting back together for a fifth season. As we laugh and cringe with recognition, their stories make us all feel a little less alone in the world.”

In Insecure Season 4, Issa pursues a passion project she actually cares about, Molly navigates a real relationship for the first time, Lawrence figures out what leveling-up means for him, and we see the effect of Tiffany’s new baby on the dynamic of the friend group.

Along the way, we see these characters evaluating relationships, both new and old, in an effort to figure out who and what comes with them in this next phase of their lives.

The series won an Emmy for Single-Camera Picture Editing For a Comedy Series.

The first four seasons of Insecure are available to stream on HBO Max. 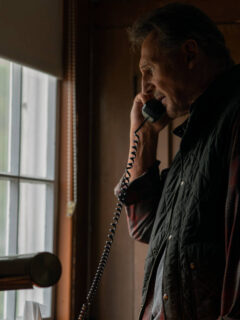 Next
The Marksman Review: The New Liam Neeson Action Thriller
Click here to cancel reply.
Disclaimer: This post may contain affiliate links through which we earn a commission if you decide to make a purchase, at no cost to you. As an Amazon Associate, we earn from qualifying purchases.