For National Streaming Day, Hulu has revealed the False Positive teaser, Love Victor Season 2 trailer, new photos from Only Murders in the Building, a new promo for Madagascar: A Little Wild Season 3, and the Dave Season 2 premiere date.

You can view the updates below by order of the series’ premiere dates.

Wrapped up in the endearing humor and physical comedy that made the Madagascar movies so popular, Madagascar: A Little Wild is a CG, musical comedy series featuring Alex, Marty, Gloria and Melman as young residents of a rescue habitat in the Central Park Zoo.

Like everybody who lands in New York, these kids have big dreams and big plans. The series celebrates being yourself, never giving up, and pursuing your dreams with abandon, no matter the size.

But being out brings with it new challenges, as Victor faces a family struggling with his revelation, a heartbroken ex-girlfriend in Mia, and the difficulties of being an openly gay star athlete — all while navigating the excitement of his relationship with Benji.

In the second season of FXX’s comedy series Dave, Dave knows he’s destined for rap superstardom – but at what cost? With the pressure mounting as he records his debut album, he has to decide if he’ll sacrifice friendships, love, and his own sense of self in order to make his dream come true.

The half-hour comedy is based on the life of rapper and comedian Dave Burd, known as Lil Dicky on stage.

In False Positive, after months of trying and failing to get pregnant, Lucy (Ilana Glazer) and Adrian (Justin Theroux) finally find their dream fertility doctor in the illustrious Dr. Hindle (Pierce Brosnan).

But after becoming pregnant with a healthy baby girl, Lucy begins to notice something sinister through Hindle’s gleaming charm, and she sets out to uncover the unsettling truth about him, and her own “birth story.”  As if getting pregnant weren’t complicated enough…

Ilana Glazer is known for her work in the comedy series Broad City, as well as the film Rough Night and her debut stand-up comedy special, The Planet Is Burning. Justin Theroux is known for Mulholland Drive, The Spy Who Dumped Me, The Leftovers, Wanderlust and Lady and the Tramp.

Pierce Brosnan starred as James Bond in GoldenEye, Tomorrow Never Dies, The World Is Not Enough, and Die Another Day.

ONLY MURDERS IN THE BUILDING (August 31)

From the minds of Steve Martin, Dan Fogelman and John Hoffman comes a comedic murder-mystery series for the ages. Only Murders In The Building follows three strangers (Steve Martin, Martin Short and Selena Gomez) who share an obsession with true crime and suddenly find themselves wrapped up in one.

When a grisly death occurs inside their exclusive Upper West Side apartment building, the trio suspects murder and employs their precise knowledge of true crime to investigate the truth. As they record a podcast of their own to document the case, the three unravel the complex secrets of the building which stretch back years.

Perhaps even more explosive are the lies they tell one another. Soon, the endangered trio comes to realize a killer might be living amongst them as they race to decipher the mounting clues before it’s too late.

Only Murders in the Building hails from co-creators and writers Steve Martin and John Hoffman (Grace & Frankie, Looking). Martin and Hoffman will executive produce along with Martin Short, Selena Gomez, Jamie Babbitt, This Is Us creator Dan Fogelman and Jess Rosenthal. 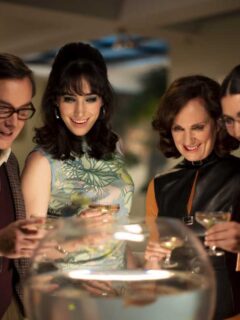 Next
Acorn TV June 2021 Schedule Announced
Click here to cancel reply.
Disclaimer: This post may contain affiliate links through which we earn a commission if you decide to make a purchase, at no cost to you. As an Amazon Associate, we earn from qualifying purchases.
Amazon Prime Day 2021 is June 21 and 22! Click here for the deals.