Posted on Published: May 5, 2021 Categories Movies

Hannah John-Kamen has garnered international critical acclaim for her work across television, film and stage, working with some of the most prolific and respected names in the industry.

She recently wrapped production on Resident Evil: Welcome to Racoon City and has starred in the Netflix Original series The Stranger, Steven Spielberg’s Ready Player One and Marvel Studios’ Ant-Man and The Wasp.

Red Sonja is based on the sword and sorcery comic book of the same name by Dynamite Entertainment. The heroine was created by Robert E Howard and adapted by Roy Thomas.

“Hannah is a very talented actress who we’ve been following for years and she IS Red Sonja. Her range, sensibilities and strength are all qualities we have been looking for and we couldn’t be more excited to embark on this journey together,” said Joey Soloway.

Jeffrey Greenstein, President of Millennium Media, continued, “Hannah’s talent and take for Red Sonja, combined with Joey’s vision for the film is the perfect pairing to bring this reboot to life.”

Mark Canton (300, Power) and Courtney Solomon (After) are Producers. Christa Campbell and Lati Grobman on behalf of Campbell Grobman Films and Andrea Sperling on behalf of Topple are also Producers. 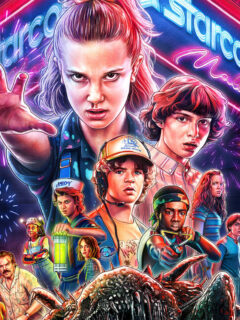 Next
Stranger Things Season 4 Teaser Trailer!
Click here to cancel reply.
Disclaimer: This post may contain affiliate links through which we earn a commission if you decide to make a purchase, at no cost to you. As an Amazon Associate, we earn from qualifying purchases.
Amazon Prime Day 2021 is June 21 and 22! Click here for the deals.