HBO Max has provided Vital Thrills with the official trailer and key art for the Max Original Generation Hustle. All 10 episodes of the series, produced by Jigsaw Productions and CNN Original Studios, will premiere on Thursday, April 22 on HBO Max. You can watch the trailer below and you’ll find the key art underneath!

How far would you go for power, fame and fortune? Featuring outrageous, high-stakes stories, Generation Hustle follows brilliant and brazen young entrepreneurs who use cunning and creativity to pull off the most wildly inventive high-stakes gambles of the new millennium.

Each of the ten standalone Generation Hustle episodes exposes the exploits of over-zealous entrepreneurs who may have gone too far. Combining true-crime capers and character studies with fresh, glossy stories of fakes, imposters, and unabashed ambition, this shocking and sometimes comic series explores the no-holds-barred quest for riches and status in the age of social media.

Episode 1: “Hollywood Con Queen”
Dreams and deception collide when a brilliant con artist impersonates high-profile Hollywood producers to scam aspiring young artists. After the FBI teams with a dogged investigator to hunt this fraudster across the globe, a twisted tale, reminiscent of classic caper movies, ensues.
Directed by Yon Motskin.

Episode 2: “The Party’s Over”
Building a business with nothing but blind ambition, Ian Bick transforms himself from a nerdy teen into a concert promoter almost as legendary as the bands he books. As the teenager’s EDM raves pack houses and feed his emerging VIP lifestyle with first-class trips, high-end shopping, and brand-new jet skis, his fall is as dramatic as his rise – culminating in an FBI raid that shocks his family, friends, and hometown.
Directed by George Plamondon.

Episode 3: “The 23 Lives of Jeremy Wilson”
Jeremy Wilson channels his good looks and effortless charisma to assume many identities: a decorated Special Forces Captain, a swanky Scottish music journalist, the love child of an infamous IRA bomber, and more. While this master of deception travels the country seducing, manipulating, and cheating friends and family, he manages to evade law enforcement for decades – until he’s finally outsmarted by a New York City cop.
Directed by Jeremiah Crowell.

Episode 4: “Anna Delvey Takes Manhattan”
Aided by a masterful social media presence, the young, awkward Anna Sorokin transforms herself into glamorous German heiress Anna Delvey. But after she sticks her friend Rachel with the bill for their lavish vacation, Anna’s world begins to unravel and she goes on the lam. Convinced her friend is a con artist, Rachel works with the NYPD to piece together clues to track Anna down.
Directed by Martha Shane.

Episode 5: “Cult of WeWork”
Is Adam Neumann a brilliant salesman or a greedy false prophet so charismatic that he convinced an entire generation to follow him to the promised land? The last of Silicon Valley’s so-called “unicorns,” WeWork’s extraordinary rise and fall is told through the eyes of some of the multi-billion-dollar company’s earliest disciples.
Directed by Yon Motskin.

Episode 6: “Baekeland”
Young, aristocratic billionaire William Baekeland charms his way into an exclusive group of wealthy world travelers – only to disappear with their money. Is he a brilliant imposter who spins fabulous lies and invents fictional personas to con the rich or just a kid who went too far trying to escape his past?
Directed by Yon Motskin.

Episode 8: “Prince of Fraud”
An orphan born in Colombia and raised by his adoptive parents in Michigan, Anthony Gignac developed a taste for the finer things – and to get them he assumes the persona of a Saudi Royal prince. Whether flying high with real-estate moguls or convincing banks to extend him lines of credit, Gignac earns his reputation through a combination of wit and bravado… but how long can he sustain the delusion before the authorities catch on?
Directed by Jeremiah Crowell.

Episode 9: “The Alabama Exit”
When self-proclaimed Google alum Kyle Sandler bursts into the tiny town of Opelika, Alabama to launch the Round House business incubator, he promises to turn the town into the “Silicon Valley of the East.” The enchanted residents throw themselves into the project, until a local 14-year-old inventor gains nationwide press for reportedly rejecting a $30 million outside buyout offer. Spooked Round House investors are left wondering: is Kyle who he says he is or were his promises built on lies?
Directed by Martha Shane.

Episode 10: “A Scam with a Beat”
A teenager reinvents himself as scam rapper Teejayx6, using his songs to teach others how to con. When his music takes off, the master of deception manages to scam his way into a record deal with one of America’s biggest labels before the age of 20. But as Teejay ascends, the real-life stakes increase.
Directed by Yemisi Brookes.

Previous
Sperm Whale Nurses in Secrets of the Whales Footage 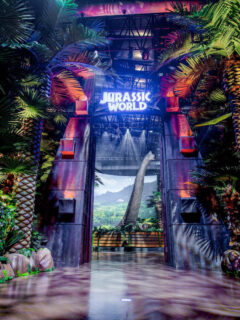 Next
Jurassic World: The Exhibition Tickets for Dallas Go on Sale!
Click here to cancel reply.

Kyle Sandler was a self-proclaimed pathological liar when I met him as a teen in 1992. He really honed his skills over the years but he’s not as bright as he presents himself, so I’m not surprised he got caught. You know what they say about karma.