Netflix has given us a first look at Outer Banks Season 2, premiering this summer, and the new movie Skater Girl, set to premiere on the streaming service June 11.

YA series Outer Banks was created by Jonas Pate, Josh Pate, and Shannon Burke, who all return as showrunners and executive producers.

“Season 2 is going to test our crew like never before. We’ve turned up the dial on everything fans loved about season one – more mystery, more romance and higher stakes,” said the Pates and Burke.

“It’s a full throttle, action-packed adventure and these photos offer a glimpse into the next chapter for our Pogues. All we can say for now is buckle up, it’s going to be a wild ride.”

Outer Banks is a coming-of-age story that follows a tight-knit group of local teens (the “Pogues”) in the beach vacation destination of the Outer Banks of North Carolina.

After their near-death escape, Season Two finds John B & Sarah on the run — and in over their heads — in the Bahamas.

New friends also bring new foes as they’re back on the trail of the gold, while the stakes for Kiara, Pope, and JJ rapidly escalate at home. The $400M is still in the game, but will the uncovering of a new-found secret reunite the group for a fresh mission? The adventure of a lifetime awaits, but uncharted waters ahead mean our Pogues must do all they can to make it out alive.

Season 1 premiered on April 15, 2020 and is currently streaming globally, only on Netflix.

Skater Girl is a coming-of-age story about confidence, courage, and the profound impact of blazing your own trail. Set in a remote village in Rajasthan, India, the film follows Prerna (Rachel Saanchita Gupta in her debut performance), a local teen living a life bound by tradition and duty to her parents.

But when London-bred advertising executive Jessica (Amy Maghera) arrives in the village to learn more about her late father’s childhood, Prerna and the other local children are introduced to an exciting new adventure thanks to Jessica and her old friend (Jonathan Readwin) who cruises into town on a skateboard.

The kids become infatuated with the sport, skating through the village, disrupting everything and everyone around them.

Determined to empower and encourage their newfound passion, Jessica sets out on an uphill battle to build the kids their own skatepark, leaving Prerna with a difficult choice between conforming to society’s expectations of her or living out her dream of competing in the National Skateboarding Championships.

The movie was produced by Emmanuel Pappas and co-written and produced by Vinati Makijany. 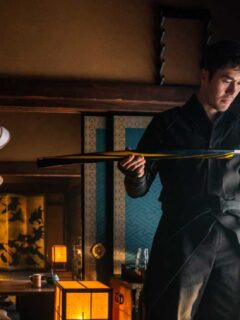 Next
Snake Eyes Poster and Photos Revealed
Click here to cancel reply.
Disclaimer: This post may contain affiliate links through which we earn a commission if you decide to make a purchase, at no cost to you. As an Amazon Associate, we earn from qualifying purchases.
Amazon Prime Day 2021 is June 21 and 22! Click here for the deals.