Discovery has announced the discovery+ May 2021 premieres. discovery+ is the new non-fiction, real-life subscription streaming service that launched on January 4, 2021.

The discovery+ May 2021 lineup includes the true crime titles Queen of Meth, giving viewers an in depth view of one of America’s most infamous drug lords, and Onision: In Real Life – Sarah Speaks, which follows up on the success of the discovery+ original series about Greg “Onision” Jackson.

Additionally, new premieres include Clipped with Michael Urie and Martha Stewart in the home and garden category as well as Chopped Next Gen, which gives Gen Z chefs the opportunity to compete in the Chopped kitchen.

In the U.S., discovery+ offers more than 55,000 episodes all in one place, with over 2,500 current and classic shows from Discovery’s iconic portfolio of networks, including HGTV, Food Network, TLC, ID, OWN, Travel Channel, Discovery Channel and Animal Planet.

discovery+ features a partnership with Verizon that gives their customers with select plans up to 12 months of discovery+ on Verizon. discovery+ is also available on platforms and devices from Amazon, Apple, Google, Microsoft, Roku and Samsung.

You can view the full list of discovery+ May 2021 premieres below in each genre.

Queen of Meth – Friday, May 7
Queen of Meth takes viewers on a deeply personal journey unveiling how one of America’s most infamous and unexpected drug lords turned addiction into an enterprise. Lori Arnold, a former “queenpin” and sister to celebrity Tom Arnold, revisits her hometown of Ottumwa, Iowa, where for six years, she ran a sprawling multi-state meth empire. Lori and Tom’s vivid recollections of their formative years reveal how Lori’s disturbing childhood and wild adolescence led her down a drug-riddled path, leaving immeasurable destruction in her wake.

Broken Harts – Tuesday, May 18
What happens when the “perfect” family turns out to be anything but? This riveting documentary explores the tragic lives and deaths of the Hart family, two women who adopted six children and led a life of travel, activism and community service. But after countless warning signs that the children could be in danger, their manufactured idyllic facade began to crumble, and lead to a tragic end no one saw coming. Find out what really happened to the Hart family on the two-hour event Broken Hearts.

Onision: In Real Life – Sarah Speaks – Thursday, May 27
Just one day after the release of the third episode of the discovery+ original Onison: In Real Life, Greg “Onision” Jackson was demonetized by YouTube. The ruling for Onison was devastating, halting his career as a money-generating content creator. Yet, while this explosive announcement was occuring, Sarah, one of Onision’s most well-known accusers, simultaneously went public with her decision to come forward and share her story. In a brave one-on-one interview, Sarah bares all for the first time and exposes the shocking truth behind the allegations that have haunted Onision and caused him to be one of the most hated men on the internet.

Chopped Next Gen – Tuesday, May 25
Actress, producer, and creator Liza Koshy challenges a new guard of rising, Generation Z chefs over five episodes in the ultimate culinary arena. Watch as these young competitors bring the flair and flavor to the Chopped kitchen through three rounds to solve the algorithm of mandatory, mystery basket ingredients. Each basket requires the right mix of innovation and ambition, with the winner of each episode earning insta-fame and $10,000.

Clipped – Wednesday, May 12
In Clipped, the first competition series set in the spectacular world of topiary, seven real life “Edward Scissorhands” will create breathtaking sculptures out of meticulously trimmed shrubbery, plants and flowers—designing colorful, larger-than-life, living works of art. During the series hosted by Michael Urie, the competitors will face high-stakes challenges and have their topiary masterpieces evaluated by lead judge Martha Stewart and an expert panel of judges, including Fernando Wong and Chris Lambton, in hopes of winning $50,000 cash and bragging rights as the first-ever Clipped champion.

40 Year Old Property Virgin – Wednesday, May 26
A unique set of house hunters—adults who are ready to move out from the comfort of their parents’ roof—will search for their first home in 40 Year Old Property Virgin. Before they find a place all of their own and sign on the dotted line, these first-time homebuyers must navigate the opinions of family, friends and nosy neighbors.

Meet the Meerkats – Saturday, May 8
Welcome to the Kalahari Desert in South Africa where three rescued meerkat families (mobs) are learning the way of life in the wild for the very first time. Audiences will meet a cast of distinct characters and personalities and be submerged into the incredible world of meerkats while following the journey of three rehabilitated mobs, most of whom were snatched from the wild as pups and returned to their rightful home in Africa after being rescued from the illegal wildlife trade. Witness their stories of resilience and evolution as their lives ebb and flow in their new environment bringing the inevitable mix of joy, wonder and jeopardy that make these gregarious animals so irresistible.

The Undateables – Saturday, May 15
Looking for love can be tricky, but some find it harder than others. Add disability to the equation and it can sometimes seem almost impossible. This uplifting series returns to follow the journeys of several extraordinary singletons as they enter the dating circuit in pursuit of love.

90 Day: Foody Call – Saturday, May 29
In 90 Day: Foody Call, expect a dash of sass and a lot of fun when favorite couples invite you into their kitchens and dish on recipes for relationship success, all while preparing traditional meals from their home countries. A cross between a couple’s therapy session with a side of culinary fun, these 90 Day favorites spill the beans on the challenges and triumphs of intercultural relationships and their incredible relationship journeys together. Viewers will put them in the hot seat, and no subject is off the table, as each couple answers provocative and burning fan questions. From a trip to the grocery store to chopping, mixing, frying and baking, these duos put their culinary skills to the test and dance their way around the kitchen—and each other!

90 Day Journeys: Couples Updates – Sunday, May 30
90 Day Journey is a one-stop place to watch 90 Day couples’ love stories from the beginning to present day. Each curated miniseries is made up of every scene a couple has appeared in across all the shows in the 90 Day universe, giving fans the opportunity to watch each pair’s story from the start. New updated episodes include fan favorite storylines for 90 Day couples Rebecca & Zied, Tarik & Hazel, and Mike & Natalie as well as 90 Day singles Ed, Molly, Colt and Danielle. New couples added to the 90 Day Journey series include Brandon & Julia and Jovi & Yara from the latest season of 90 Day Fiancé.

Homemade Astronauts – Thursday, May 13
Meet the leaders of a new movement – the D.I.Y. space race. With plans to break the record on civilian launch distance and to test a home-built space suit at the edge of the atmosphere, these everyday astronauts are putting it all on the line to turn their dreams into reality.

Super Soul – Saturday, May 1
Award-winning actress Julianna Margulies joins Oprah to discuss her new memoir, Sunshine Girl: An Unexpected Life. She shares candid reflections on her unconventional childhood, her marriage and the most memorable moments from her career.

Feral – Wednesday, May 5
Several hundred thousand feral cats roam the Hawaiian Islands. These cats are struggling to survive in the wild and, unfortunately, they are also killing endangered Hawaiian species on the brink of extinction. The search for a solution to this complex problem has sparked a controversial and polarizing debate across the state.

Citizen Penn – Thursday, May 6
On January 12, 2010 a devastating 7.0 earthquake struck Haiti altering the landscape and lives of millions. Aid workers from around the globe descended on the island, along with one unlikely leader – actor and filmmaker Sean Penn. Citizen Penn chronicles the moment Penn and his team of volunteers arrive on the island, and the ten years since, offering an intimate and self-reflective look into the triumphs and challenges of those who decided to stay and to do something. Citizen Penn spotlights the history of the J/P HRO (now CORE) while highlighting the current on the ground efforts in the U.S. around the pandemic and vaccine roll-out.

Genius Factory – Thursday, May 20
In the 1980s, eccentric billionaire Robert Graham funded the largest legal genetic experiment in human history to create the world’s smartest kids. Thirty years later, the children of his eugenics experiment walk the streets of America as adults. For the first time, people who worked at the bank are ready to talk, and the genius children are going to meet each other and find out who their fathers are. Never before has nature versus nurture been tested quite like this.

Apocalypse 45 – Thursday, May 27
Apocalypse 45 recounts the end of World War II. With never before seen restored footage and the voices of 24 men who lived through these events, this timely documentary highlights the experiences of the last of the Greatest Generation. 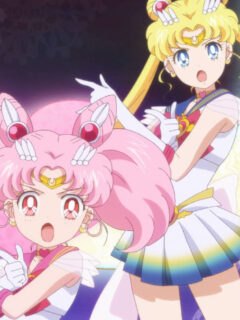 Next
Pretty Guardian Sailor Moon Eternal The Movie Coming to Netflix
Click here to cancel reply.
Disclaimer: This post may contain affiliate links through which we earn a commission if you decide to make a purchase, at no cost to you. As an Amazon Associate, we earn from qualifying purchases.
Amazon Prime Day 2021 is June 21 and 22! Click here for the deals.