BBC Studios and ITV have announced the BritBox June 2021 titles, which include everything from new BritBox Originals to classic British fare. BritBox is the biggest collection of streaming British television in North America.

Kicking off the month, BritBox Original dramedy The Syndicate: Double or Nothing makes its long-awaited debut on the service. Written by Kay Mellor, the series returns after a five-year break with a new syndicate winning the lottery.

Set between Yorkshire and Monaco, the series follows the intense drama faced by a group of kennel employees after winning the lottery.

Another major highlight of the BritBox June 2021 lineup is the premiere of Intruder, a psychological thriller that follows a couple after one awful decision leads them down a dangerous path of corruption, lies and revenge.

You can view all the new titles below and let us know what you are looking forward to in the comments.

When the owners of Woodvale Kennels announce they are selling the business to a large corporate chain, staff members Keeley (Katherine Rose Morely, Last Tango in Halifax), Jake (Kieran Urquhart, Vera), Roxy (Taj Atwal, Line of Duty), Gemma (Liberty Hobbs, Grey’s Anatomy) and Colette (Emily Head, The Inbetweeners) are devastated to learn that they may be out of a job.

Dependent on their pay to get them from one month to the next, the weekly lottery looks like the only lifeline to gambling addict Keeley. Excitement takes over when the machine goes off after checking the ticket with local newsagent Frank (Neil Morrissey, Line of Duty) – but is everything what it seems?

Will the syndicate get what’s rightfully theirs? Watch as these kennel workers spend every last penny they own, from Yorkshire to Monaco, to see justice through.

Two leading British criminal barristers, Jeremy and Sasha, re-investigate historical murder cases in this return of the award-winning true crime series. The series continues to follow the emotional journey of modern-day descendants who are trying to clear the names of relatives executed for murder.

However, the stories don’t always end there, and with new companion series Murder, Mystery and My Family: Case Closed? S2, Jeremy and Sasha revisit some of the cases they investigated previously and catch up with the family members about new developments since the original programs aired.

The series further updates viewers on the family’s quest to clear their relation’s name, and is filled with unexpected reunions and new evidence.

Every year, a great display of military precision and entertainment fill the streets on a parade route beginning at Buckingham Palace to celebrate the Queen’s birthday. Tune in for this year’s celebration!

Affluent, high-flying couple Rebecca (Elaine Cassidy, The Paradise) and Sam (Tom Meeten, The Ghoul) live an idyllic life in their luxurious coastal house – that is until their paradise is shattered one night when two teenagers break into their home. In a rage, Sam kills one of the intruders, Syed Khali, who is trying to escape through a window.

Realizing that Sam actually murdered the intruder, not in self-defense, the couple hatch a plan to restage the crime scene and change their stories before the police arrive. At first, they seem to have gotten away with their lie, however, as the investigation intensifies, their cover-up starts to unravel. Exactly how far are Rebecca and Sam willing to go to protect the life they have created?

A deliciously dark comedy anthology series that tells unique and daring stories related to the number 9, Steve Pemberton and Reece Shearsmith’s award-winning series returns with season 6. The sixth anthology of films brings together an always-surprising mixture of comedy, drama, horror and thriller – all designed to delight and confound.

With a stellar cast of guest stars including Gemma Whelan (Game of Thrones), Sian Clifford (Fleabag), Adrian Dunbar (Line of Duty), Lindsay Duncan (Black Mirror), Paterson Joseph (Noughts + Crosses, Timeless) and Derek Jacobi (The Last Tango in Halifax), these are unique tales that will either make you shake with fear or shriek with laughter – or both.

Previous
The Battersea Poltergeist Picked Up by Blumhouse and Maniac 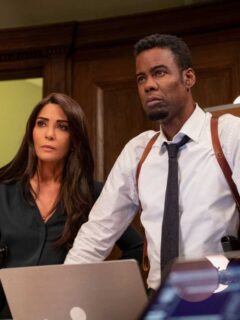 Next
Spiral to Debut on Starz in October
Click here to cancel reply.
Disclaimer: This post may contain affiliate links through which we earn a commission if you decide to make a purchase, at no cost to you. As an Amazon Associate, we earn from qualifying purchases.
Amazon Prime Day 2021 is June 21 and 22! Click here for the deals.