Just days ahead of the much-awaited launch of Marvel Studios’ Black Widow, Scarlett Johansson, Rachel Weisz and Kevin Feige, producer, president of Marvel Studios, and chief creative officer of Marvel, weigh in on the story of Natasha Romanoff’s past and the role the film plays in the future of the Marvel Cinematic Universe.

Black Widow — the first film in Phase Four of the MCU — will launch simultaneously in theaters and on Disney+ with Premier Access in most Disney+ markets this Friday, July 9, 2021.

In Marvel Studios’ action-packed spy thriller Black Widow, Natasha Romanoff aka Black Widow confronts the darker parts of her ledger when a dangerous conspiracy with ties to her past arises.

You can watch the new “Future” featurette for Black Widow using the player below.

You can also watch the new Black Widow episode of Marvel Studios’ Legends on Disney+ to prepare for the movie arriving this Friday!

On Friday, July 30, Disney‘s Jungle Cruise will also release simultaneously in theaters and on Disney+ with Premier Access.

You can now watch the new “Big Adventure” featurette for the film and join stars Dwayne Johnson and Emily Blunt for an inside glimpse at the adventure of a lifetime. 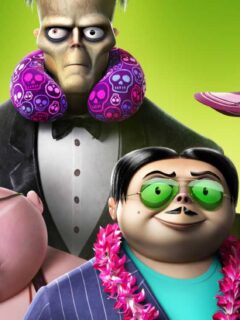 Previous
The New Trailer and Poster for The Addams Family 2

Next
Love Island Brings the Heat with Additional Content on Paramount+
Click here to cancel reply.
Disclaimer: This post may contain affiliate links through which we earn a commission if you decide to make a purchase, at no cost to you. As an Amazon Associate, we earn from qualifying purchases.