Aquaman and the Lost Kingdom Title Revealed by James Wan

Director James Wan has revealed the title for the anticipated Aquaman sequel – Aquaman and the Lost Kingdom. The filmmaker posted photos of a production meeting where the title was on display. He included the caption, “The tide is rising.”

Aquaman and the Lost Kingdom is set to start filming soon for a December 16, 2022 theatrical release by Warner Bros. Pictures.

Starring Jason Momoa as the title character, Aquaman was released in December of 2019 and grossed a massive $1.148 billion worldwide.

The film earned $335 million at domestic theaters and a whopping $813.4 million from international markets.

Aquaman is the origin story of half-surface dweller, half-Atlantean Arthur Curry that takes him on the journey of his lifetime — one that will not only force him to face who he really is, but to discover if he is worthy of who he was born to be…a king.

The first movie also stars Amber Heard as Mera, a fierce warrior and Aquaman’s ally throughout his journey; Oscar nominee Willem Dafoe as Vulko, council to the Atlantean throne; and Patrick Wilson as Orm, the present King of Atlantis.

Wan directed from a screenplay by David Leslie Johnson-McGoldrick and Will Beall, story by Geoff Johns & James Wan and Will Beall, based on characters created by Paul Norris and Mort Weisinger for DC.

They were joined by costume designer Kym Barrett and composer Rupert Gregson-Williams.

Aquaman was rated PG-13 for sequences of sci-fi violence and action, and for some language. 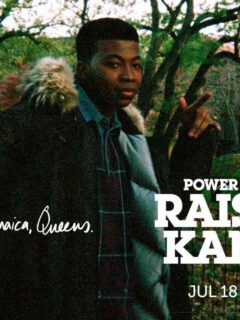 Next
Power Book III: Raising Kanan Trailer and Key Art Debut
Click here to cancel reply.
Disclaimer: This post may contain affiliate links through which we earn a commission if you decide to make a purchase, at no cost to you. As an Amazon Associate, we earn from qualifying purchases.
Amazon Prime Day 2021 is June 21 and 22! Click here for the deals.