Acorn TV has announced the programs that are coming to the AMC-owned streaming service in May. The Acorn TV May 2021 lineup features a wide variety of acclaimed English and foreign-language dramas, engaging comedies, documentaries and more.

The Acorn TV May 2021 schedule includes Whitstable Pearl, the Acorn TV Original mystery drama starring Kerry Godliman (After Life) as a restaurant owner and private detective who investigates murders around her picturesque seaside town, as well as The Drowning, the suspenseful thriller surrounding a woman (Jill Halfpenny, Humans) on a mission to uncover the secrets behind the disappearance of her son.

Also coming are Blinded – Those Who Kill, the intriguing spin-off to the dark Danish psychological drama, Darkness – Those Who Kill, and the last two episodes of Season 3 of Keeping Faith, the record-breaking UK domestic thriller series starring Eve Myles (Broadchurch, Doctor Who) and Celia Imrie (Better Things).

The Series 7 finale of The Brokenwood Mysteries will also launch on the service. The critically-acclaimed New Zealand detective series stars Neill Rea (Go Girls) and Fern Sutherland (The Almighty Johnsons).

Keeping Faith Series 3 (Acorn TV Original) (Episode 5 of 6)
This record-breaking, award-winning BBC thriller comes to a close in this dramatic, final season. Series 3 finds small town lawyer Faith Howells (Eve Myles, Broadchurch, Torchwood, Victoria) attempting to navigate the disillusion of her marriage, while taking on an emotionally wrenching legal medical case involving a gravely ill young boy. Into this mix, Faith is confronted by a terrible and long-buried figure from her past: her mother, Rose Fairchild (Celia Imrie, Better Things, The Best Exotic Marigold Hotel), whose reappearance uncovers secrets in Faith’s background and will force audiences to ask the question: “Who is Faith Howells?”

Faith’s ordeal across the series transforms her from a stay-at-home, fun-loving and carefree mother to detective, action hero and lover. She takes risks and gambles to keep her family out of danger and finds a new inner strength. (1 EP, 2021)

VE Day: Minute by Minute
Marking the 75th anniversary of VE day, this one-hour special guides us through the events of May 8,1945, as they took place across the world. From key moments such as the surrender of all German forces to the untold stories of soldiers tentatively stepping out of Prisoner of War camps into an era of peace, this is the definitive account of a day like no other.

The Drowning (Acorn TV and Sundance Now Exclusive)
Since losing her son eight years ago, Jodie (Jill Halfpenny, Dark Money, Liar) has been rebuilding her life, but when she catches sight of a teenage boy Daniel (Cody Molko), she is convinced she has found her missing son. Whether she is right or not, in that moment her spark of hope is reignited, and she commits to a dangerous and transgressive path that will take her to the edge of reason. How far will she go to find her missing child?

Blinded – Those Who Kill (Acorn TV Exclusive, Foreign Language, Danish, with English subtitles)
This captivating psychological crime drama sees leading criminal profiler Louise Bergstein (Natalie Madueño, Bedrag) delve into the dark desires and psychology of the potential suspects surrounding a murder case. This spinoff follows the format of its parent series Darkness – Those Who Kill, perfectly combining a tense thriller with a gripping human drama, focusing on the psychological and behavioral patterns behind a serial killer.

When Louise embarks on a new murder case, she quickly uncovers a distinct pattern in the unsolved murders of three young men, killed within a few months of each other. We soon discover that she has a blind spot clouding her judgement and analysis of the case: Louise may have a personal connection to the killer, who is more intelligent than she had dared to imagine. She desperately wants to solve the case before the next brutal killing, but could she herself be in the killer’s sights? (8 EPS, 2021)

Amber
Living in Dublin’s suburbs, Sarah Bailey (an IFTA winning role by Eva Birthistle, Waking the Dead) and Ben (David Murray, Zonad) are recently separated yet doing their best to get on with their lives while remaining good parents to their children, Amber (Lauryn Canny, A Thousand Times Good Night, Normal People) and Eamon (Levi O’Sullivan). Then, in one day, their lives are turned upside down when Amber fails to return home one evening.

The disappearance of 14-year-old Amber Bailey sets off a two-year search during which time her family experiences unimaginable guilt, fear, and devastating grief as they live out every parent’s worst nightmare. Investigating the case of the missing teenager from different viewpoints, each episode plays with the chronology of events and focuses on the perspective of one individual connected to the case as first her family, then friends, then complete strangers become drawn into the quest to find out what happened. (4 EPS, 2014)

Digging for Britain Series 5-6
In this captivating documentary series, Professor Alice Roberts visits archaeological excavations around the U.K. over a yearlong period, linking together the results of digs and investigations of the country’s history. Among the astonishing – and occasionally disturbing – stories explored: The theatre where Shakespeare premiered Romeo and Juliet and Henry V – complete with sound effect props and evidence that Shakespeare’s original audience was much rowdier than you might expect; evidence for the first Roman Siege in Britain, including the biggest cache of Roman bullets discovered anywhere, and Britain’s most famous monastery – Lindisfarne – rediscovered for the first time since it was violently sacked by the Vikings 1000 years ago. (Series 5 – 3 EPS, 2016; Series 6 – 4 EPS, 2017)

Like Father Like Son
Dee Stanton (Jemma Redgrave, Holby City) seems to have it all – she’s progressing up the career ladder and has just had a marriage proposal from her boyfriend Dominic. It’s a far cry from the day 11 years ago when she arrived home with her young son to discover that her husband Paul has been arrested for brutally murdering four young women. Dee has moved on from those dark days, but her 15-year-old son Jamie is determined to find out more about his father. He researches the case on the internet and finally meets his dad, with his interest verging on obsession.

Then one day, Dee is forced to face a mother’s worst nightmare when Jamie is accused of strangling a fellow pupil at school. Is he turning out like his father – a serial killer serving life for four counts of murder? Is nature stronger than nurture, or is prejudice going to condemn Jamie anyway? Starring Robson Green (Grantchester) and Tara Fitzgerald (Game of Thrones). (2 EPS, 2005)

Whitstable Pearl (Acorn TV Original) (Episodes 1-2 of 6; Weekly episodes through June 14)
Whitstable Pearl explores the dark undercurrents of murder and debauchery swirling beneath the surface of the picturesque English seaside town of Whitstable, famous for its native oysters. Kerry Godliman (Ricky Gervais’ After Life) stars in the titular role as Pearl Nolan, the big-hearted local restaurant owner who had just opened up a detective agency, a dream long delayed by an unplanned pregnancy that left her police career in tatters. When the body of a close family friend is found under mysterious circumstances in the series premiere, Pearl suspects foul play and teams up with new arrival, DCI Mike McGuire (Howard Charles, The Musketeers), to learn the truth.

In episode two, an estate agent is found tied up having been tortured, and McGuire is left baffled over what could have driven someone to act so viciously. Meanwhile, Pearl investigates a string of anonymous donations and whether Whitstable has its very own Robin Hood. Also starring Frances Barber (Dr. Who, Silk) as Pearl’s mother, Dolly. This series is based on the adored novels by Julie Wassmer (EastEnders). (2 EPS, 2021)

Joanna Lumley in The Land of The Northern Lights
An amazing journey in Norway’s far North as award-winning actress Joanna Lumley (Absolutely Fabulous) pursues a lifelong dream to track down the elusive, stunningly beautiful Northern Lights – “the true wonder of the world,” as she puts it. Joanna grew up in tropical Malaysia, and as a little girl never saw snow or felt cold.

Inspired by fairytales and picture books, she always longed to make the journey north. At last she travels north across the Arctic Circle, up through Norway to Svalbard, the most northerly permanently inhabited place on Earth, where she has to cope with temperatures approaching minus 30 degrees centigrade. (TV Movie, 2008)

Whitstable Pearl (Acorn TV Original) – Episode 3 of 6
When a Civil War re-enactment ends in tragedy, Pearl and Mike find themselves on opposing sides. Their inquiries reveal a community bitterly divided by the memory of a miner’s strike and the possibility that there is more to the accident than first meets the eye. (1 EP, 2021)

Candice Renoir, Series 1 (Exclusive, Foreign language series, French w/English subtitles)
Candice Renoir (Cécile Bois), a French policewoman and single mother of four, resumes her job in a port town in the South of France after putting her career on hold for a decade. Soon she is faced with the reality of juggling her demanding job along with motherhood, while trying to gain the acceptance of her colleagues and keeping up with the latest trends. Each episode focuses on one case, always in different walks of life and always solved at the end. (7 EPS, 2013) 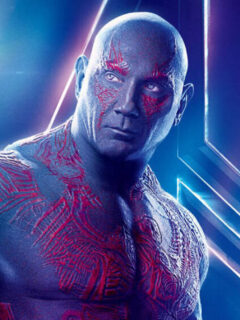 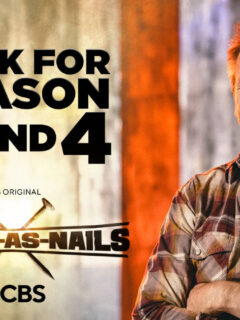 Next
Tough as Nails Season 3 and 4 Ordered by CBS
Click here to cancel reply.
Disclaimer: This post may contain affiliate links through which we earn a commission if you decide to make a purchase, at no cost to you. As an Amazon Associate, we earn from qualifying purchases.
BigScoots Hosting: The last host you'll ever need! Click for details.