Acorn TV has announced the programs that are coming to the AMC-owned streaming service in April. The Acorn TV April 2021 lineup is filled with captivating, acclaimed English and foreign-language dramas, heart-warming comedies, documentaries and more. Read on for this month’s list, and in case you missed them, you can still view the Acorn TV March 2021 titles as well.

Also coming is the series finale of Bloodlands, the Acorn TV Original crime thriller starring James Nesbitt (The Missing, Cold Feet) as a Northern Irish detective on the obsessive hunt after a legendary assassin nicknamed Goliath to investigate an historic cold case.

There will also be weekly new episodes of The Brokenwood Mysteries Series 7. New episodes will stream every Monday in April.

Bloodlands (Acorn TV Original) (SERIES FINALE- Episode 4 of 4)
When an expensive car containing a possible suicide note is pulled from the sea, veteran Northern Ireland police detective Tom Brannick (James Nesbitt, The Missing, Cold Feet, The Hobbit) instantly sees the connection to an infamous cold case that holds enormous personal significance for him. It seems someone is trying to force the police to re-open their investigation into a notorious and long-buried series of mysterious disappearances over 20 years ago during a dark period in Northern Ireland history.

This intense Irish crime thriller follows Brannick’s obsessive campaign to identify and unmask the legendary assassin behind these events, a semi-mythical figure nicknamed Goliath: it’s an explosive cat-and-mouse game where the stakes have never been higher. Bloodlands premiered on BBC One prior to its North American launch on Acorn TV. Co-executive produced by Jed Mercurio, creator/EP of Bodyguard and Line of Duty. (1 EP, 2021)

Only Foals and Horses
Friends and horse vets Lisa Durham and Philippa Hughes are passionate about caring for their four-legged clients. From their clinic in Wales, they head up an all-female team tackling all kinds of medical dilemmas around the clock and in all weather. We follow a year in the lives of the vets as they cover 3,500 square miles of mid and south west Wales treating horses valued between £1 and £1 million. Different seasons bring different challenges from foaling in spring to an equine flu outbreak in the summer. (4 EPS, 2019)

The Norman Conquests
The Emmy®-nominated drama presents a trilogy adapted from the hit plays by Alan Ayckbourn about a comically fraught weekend from three different perspectives. The family and in-laws gather at the decaying country house of their bedridden mother, while intimate secrets and rising tempers will soon emerge. Starring Penelope Keith (To the Manor Born), Richard Briers (Good Neighbors), Tom Conti (Shirley Valentine), and Penelope Wilton (Downton Abbey). (3 EPS, 1977)

Keeping Faith, Series 3 (Episodes 1-2 of 6; Weekly episodes through May 10)
This highly-watched, award-winning BBC thriller comes to a close in this dramatic, final season. Series 3 finds small town lawyer Faith Howells (Eve Myles, Broadchurch, Torchwood, Victoria) attempting to navigate the disillusion of her marriage, while taking on an emotionally wrenching legal medical case involving a gravely ill young boy. Into this mix, Faith is confronted by a terrible and long-buried figure from her past: her mother, Rose Fairchild (Celia Imrie, Better Things, The Best Exotic Marigold Hotel), whose reappearance uncovers secrets in Faith’s background and will force audiences to ask the question: “Who is Faith Howells?”.

Faith’s ordeal across the series transforms her from a stay-at-home, fun-loving and carefree mother to detective, action hero and lover. She takes risks and gambles to keep her family out of danger and finds a new inner strength. (2 EPS, 2021)

In Deep, Series 3
A crime drama exploring the lives of undercover detectives Liam Ketman (Nick Berry, EastEnders, Heartbeat) and Garth O’ Hanlon (Stephen Tompkinson, DCI Banks, Drop the Dead Donkey). While experiencing the pressure of living double lives, they are in for a shocking awakening when they realize just how unpredictable life can be. (8 EPS, 2003)

Off The Beaten Track, Series 2
Following the success of the first series, BBC host Kate Humble and her Welsh Sheepdog Teg are back on the road, exploring the Welsh countryside; seeking to understand how the rugged, rural, landscapes of Wales are being shaped and how they are shaping the people who live, work and play on it. Kate and Teg take the audience on a journey to discover and celebrate the areas often forgotten or overlooked, through surprising and revelatory stories.

Packed with stories full of emotion, intrigue, humour and surprise at their heart, Off The Beaten Track delivers epic sweep and ambition through beauty, celebration, exploration and revelation. (4 EPS, 2020)

Bäckström (Acorn TV Exclusive, Foreign Language, Swedish w/English subtitles)
Based on Leif GW Persson’s popular Swedish crime novels, this series centers around detective Evert Bäckström (Kjell Bergqvist) – a rock star among cops who is famous for having solved 99% of all cases he has taken on. Starring as a TV expert doesn’t help his ego or reputation -he thinks he’s a genius—and he is, at solving crimes.

When a woman’s skull is found, it seems she was murdered recently, but DNA points to her death in the 2004 tsunami. Prosecutor Hanna Hwass (Livia Millhagen) believes it’s a mistake, but Bäckström sees a case only he can solve: a woman who has died twice. (6 EPS, 2020)

One Lane Bridge
A dark crime drama with a supernatural edge, One Lane Bridge takes us to a small town upended by a mysterious killing. The story revolves around unexplained events that occur on an infamous One Lane Bridge that connects two ends of town. While investigating the murder, an ambitious Maori detective Ariki Davis (Dominic Ona-Ariki, The Commons), inadvertently reawakens a spiritual gift that endangers his life, but may help solve the mystery of One Lane Bridge. Also starring Joel Tobeck (Ash vs Evil Dead) and Sara Wiseman (A Place to Call Home). (6 EPS, 2020)

Belonging
In this bittersweet drama set in the picturesque market town of Shrewsbury, Jess (Brenda Blethyn, Vera) and Jacob Copplestone (Kevin Whately, Inspector Morse) have been happily married for twenty years and now live with Jacob’s cantankerous and demanding mother, May (Rosemary Harris, The Undoing), his sweet and good natured aunt, Brenda (Anna Massey, Oliver Twist) and his devout and elderly cousin, Nathan (Peter Sallis, Last Of The Summer Wine).

With selfless dedication, Jess has given up her job as a librarian to care for “the oldies.” But when her husband disappears, Jess’s world starts to fall apart. She now has to question the entire basis upon which her life has been built and come to terms with her newly found freedom while contending with her exasperating relations. (TV Movie, 2003) 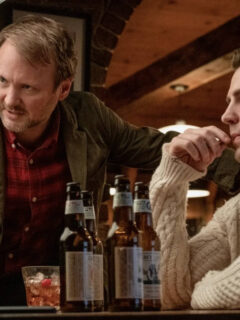 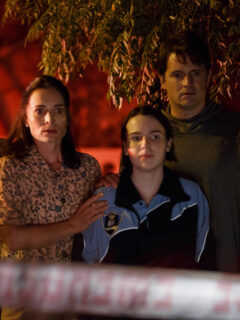 Next
Sundance Now April 2021 Schedule Revealed
Click here to cancel reply.
Disclaimer: This post may contain affiliate links through which we earn a commission if you decide to make a purchase, at no cost to you. As an Amazon Associate, we earn from qualifying purchases.
Get The FREE LEGO® Life Magazine! LEGO® Life Magazine is fun for kids 5-10 years old.