Abbott Elementary, Maggie, The Wonder Years and Queens Picked Up by ABC

Home » Abbott Elementary, Maggie, The Wonder Years and Queens Picked Up by ABC

ABC today announced that Abbott Elementary, Maggie, The Wonder Years and Queens have received series orders. Additional information can be found below.

The network also revealed that black-ish has been renewed for an eighth and final season, while The Conners, The Goldbergs, Home Economics, A Million Little Things and The Rookie have been renewed as well.

Not returning to ABC next season are the series American Housewife, Call Your Mother, For Life, mixed-ish, and Rebel.

The network has not released its Fall 2021 schedule yet, but read on to learn more about the shows that have received orders.

In this workplace comedy, a group of dedicated, passionate teachers — and a slightly tone-deaf principal — are brought together in a Philadelphia public school where, despite the odds stacked against them, they are determined to help their students succeed in life. Though these incredible public servants may be outnumbered and underfunded, they love what they do — even if they don’t love the school district’s less-than-stellar attitude toward educating children.

Quinta Brunson serves as writer and executive producer alongside Justin Halpern and Patrick Schumacker of Delicious Non-Sequitur Productions. The series is produced by Warner Bros. Television and 20th Television, a part of Disney Television Studios. The pilot episode is written by Quinta Brunson and directed by Randall Einhorn.

Based on the short film Maggie by Tim Curcio, Maggie follows a young woman trying to cope with life as a psychic. Maggie regularly sees the fate of her friends, parents, clients and random strangers on the street, but when she suddenly sees a glimpse of her own future, Maggie is forced to start living in her own present.

Inspired by the beloved award-winning series of the same name, The Wonder Years is a coming-of-age story set in the late 1960s that takes a nostalgic look at a black middle-class family in Montgomery, Alabama, through the point of view of imaginative 12-year-old Dean. With the wisdom of his adult years, Dean’s hopeful and humorous recollections show how his family found their “wonder years” in a turbulent time.

Estranged and out of touch, four women in their 40s reunite for a chance to recapture their fame and regain the swagger they had as the Nasty Bitches—their ‘90s group that made them legends in the hip-hop world.

Zahir McGhee, Sabrina Wind and Tim Story are executive producers. The series is produced by ABC Signature, a part of Disney Television Studios. The pilot episode is written by Zahir McGhee and directed by Tim Story. 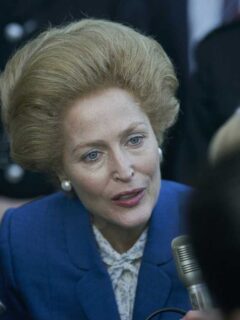 Next
Gillian Anderson to Play Catherine's Mom in The Great Season 2
Click here to cancel reply.
Disclaimer: This post may contain affiliate links through which we earn a commission if you decide to make a purchase, at no cost to you. As an Amazon Associate, we earn from qualifying purchases.
Amazon Prime Day 2021 is June 21 and 22! Click here for the deals.