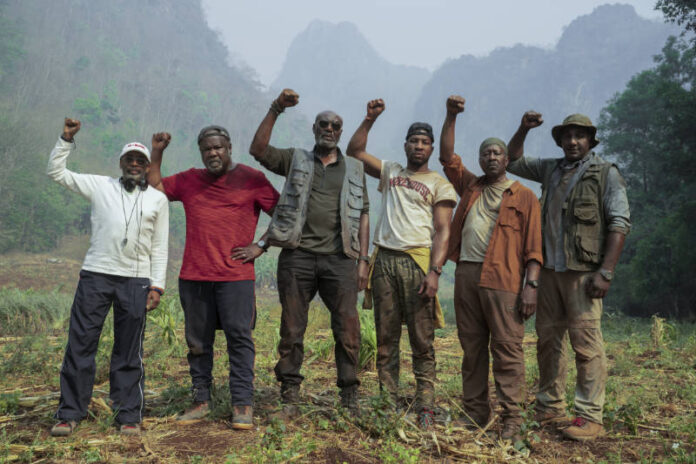 Da 5 Bloods is the story of four African-American Vets who battle the forces of man and nature when they return to Vietnam seeking the remains of their fallen Squad Leader and the gold fortune he helped them hide. Recently, director Spike Lee and stars Delroy Lindo and Jonathan Majors got together for a Critics Choice Association exclusive virtual roundtable to talk about the film. We have excerpts, and you can watch the entire interview in our player below!

In response to a question about the sort of “hybrid” (documentary and narrative) nature of the film, Lee told reporters, “I’ve been using this term, you know, a gumbo. This thing was a mixture, without red meat or pork. No red meat or pork in this gumbo.”

Lee spoke about what was happening in the world for him during the Vietnam War. “The Vietnam War was the first war that was televised into American homes, into their living rooms, my living room. I was 10 years old. So, I saw the news came on at six and 11. And that’s local and, you know, national news…

“I remember the night when Brooklyn, along with another 120 cities was aflame after Dr. Martin [Luther] King was assassinated. I remember watching the Democratic National Convention and Mayor Daley unleashing those storm troopers. And they were cracking heads. And the young students were screaming. The whole world is watching. The whole world is watching. A lot of this stuff I saw growing up.”

Lee talked about the response he’s gotten to the film, saying that he’s been “amazed and deeply touched” by the reactions. He said that people talked to him about their relatives, who didn’t come back from the war the same. “I don’t think America has gotten over it that yet, that war.”

Delroy Lindo gave a shout out to the rest of the cast, and talked about working with Lee. “Working with Spike on this was another step in a continuum that started with ‘Malcolm X,’ ‘Crooklyn’ and ‘Clockers.’ And then since we had matured 26 years since, we had worked together on Clockers I felt that the regard that Spike has always had for me, has always demonstrated toward me as an actor, the professional regard, the creative regard was very much in place on this.

He added: “Everything on this project was heightened because of the importance of the film. The special bond that we as the actors, along with Spike, created for the work that we did in front of the camera. And it felt, from the very beginning, from that time that I’ve received the script, it felt right. It felt righteous. And when we started doing the work those dynamics were accentuated.”

Jonathan Majors was asked about working with legends like Lee and Lindo. He said that Lee was the first director that showed him black protagonists, calling out the film Malcolm X in particular. “I began to watch him and follow and say, okay, this individual is responsible for this canon of work, is responsible for this part of the zeitgeist,” he said of Lee. “And then to be tapped by him… it just makes me smile now. You know, you’re joining a legend. And you’re a part of this legacy.”

Of the rest of the main cast, he said: “I don’t know if they’re my uncles, the dads I never had, they’re my-whatever they were, man, they were just my big brothers. They were everything to me, you know. And, you know, I saw how they got on and I saw how they worked together… the leadership that Delroy brought to the squad, it was just – it was cool.”

Lee was asked about the differences between the protests happening during the war and after King was assassinated. “What’s different for me,” he said, “is, when I’m watching CNN I’m seeing people all over the world chant and shout that black lives matter who aren’t black, who aren’t brown.”

“That’s speaks directly to the-the power of that horrific, graphic, eight-and-half… the last eight-and-half minutes of the life of King George Floyd. That reverberated around the world,” he added. “And people took to the streets. Statues are being torn down. Laws are being changed. Choke holds are being… there’s a lot of stuff that’s happening. White corporations are just donating money like it’s left and right.

Delroy Lindo spoke about the research he did into the PTSD that his character Paul has in the film. “I started with two of my cousins, who, both of whom were in Nam,” he said. “And both of whom had struggled with PTSD. One of my cousins more so than the other. I was working on the East Coast. They came to my home and they just sat with me and shared their souls with me. I recorded. I made notes. I watched them.”

“Then I had the last person that I spoke with, was a retired major. A sister, an African-American woman who had retired as a major. She was in the Iraq War. She spoke with me a length about PTSD.” Lindo said the cast also read the book Bloods, which Lee gave them, with accounts from veterans of the Vietnam War.

Netflix and Blink Industries have announced the new 2D animated series DeadEndia, based on the graphic novels (check prices at Amazon) from...
Read more
Streaming

Netflix has confirmed the casting of Yoon Chan-yeong, Park Ji-hu, Cho Yi-hyun, Lomon and Yoo In-soo for All of Us Are Dead,...
Read more
Streaming

Watch the New Trailer for The Old Guard Movie

Netflix has revealed the new trailer for The Old Guard movie, which is coming to the streaming service on July 10, 2020....
Read more
Streaming

Never Have I Ever Season 2 Announced, Plus New Cursed & Fatal Affair Videos

Netflix is keeping the announcements coming with the news that the critically-acclaimed comedy series Never Have I Ever has been renewed for...
Read more
Streaming

Into the Night Season 2 Given the Green Light by Netflix

Netflix has given the green light to Into the Night Season 2 and released a teaser clip with the cast which you...
Read more
Streaming

Ozark Season 4 to Wrap Up the Netflix Series

Netflix has given the green light to Ozark Season 4, which will serve as the final season of the award-winning and critically-acclaimed...
Read more
Streaming

The official trailer for the anticipated Cursed Netflix series has arrived and can be watched using the player below. The 10-episode series...
Read more
Streaming

Netflix today shared with us the official The Umbrella Academy Season Two poster and more photos, which you can all view below....
Read more
Streaming

The adolescent life of all-star athlete and activist Colin Kaepernick will come to television screens around the world in Colin in Black...
Read more