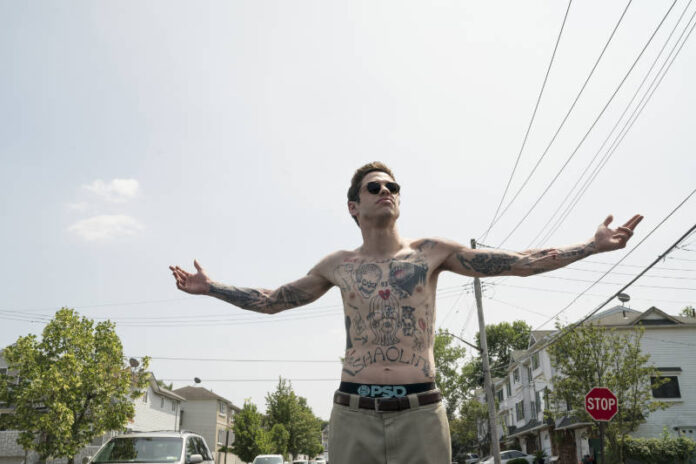 Judd Apatow has a long history of “Lovable Losers” in his work. All the way from Freaks and Geeks to The 40-Year-Old Virgin, even in films like This Is 40 and Trainwreck, Apatow tells stories about broken, juvenile characters who are dragged, kicking and screaming, into the real world. Apatow’s also been accused of glossing over their unpleasant personality facets, as if Apatow isn’t a filmmaker who understands context and trusts the audience to pick up on that. Yes, Seth Rogen’s character in Knocked Up is funny, witty, and has a good heart. But he’s also the same character who, in a moment of anger, reveals the sex of the baby to mother-to-be Katherine Heigl by yelling at her, “It’s a girl. Buy some pink sh*t.”

It would seem at first glance that Apatow is returning to form with The King of Staten Island. When we first meet Scott Carlin (Pete Davidson), he’s driving through traffic with his eyes closed, almost daring to get hit or to hit someone. He’s abrasive to everyone around him – his mother Margie (Marisa Tomei) who he still lives at home with, his sister Claire (Maude Apatow) who is leaving for college; even his stoner buddies (Ricky Velez, Lou Wilson, Moises Arias) who he practices his tattoo “artistry” on from time to time. His on-again, off-again girlfriend Kelsey (Bel Powley) wonders if Scott will ever get serious. Scott’s life has been on pause since his dad died; the problem is his dad, a firefighter who died in the line of duty, was killed when Scott was 7, and he’s 24 now. It’s not even entirely accurate to say Scott’s life is on pause. It’s more at a complete and utter stop.

We’ve heard this song before, and not just from Judd Apatow, many times. Or at least we think we have. But Apatow and Pete Davidson take Scott in unexpected directions; they refuse to make him likable or sand down his edges. It’s a wonder that Scott can even function in society at all, and even then it’s only by a very slim margin. When a young boy sees Scott’s tattoos and wants to get one as well, Scott doesn’t see any problem in giving him one, even when his friends tell him otherwise. But the squeamish kid runs away after just a few minutes under the needle. Afterwards, when the kid’s father, Ray Bishop (Bill Burr) angrily tracks Scott down, Ray and Margie seem to gain a rapport that makes Scott very nervous. It turns out that Ray is also a firefighter, and as Ray and Margie begin a relationship, the already fragile world that Scott has built around himself begins to crumble.

You can tell this is not only a personal project for Apatow but for Pete Davidson too (Davidson co-wrote the script with Apatow and Dave Sirus). Scott suffers from emotional trauma, has attention-deficit disorder, and whenever a life change presents itself Scott runs away from it as fast as he can. Other films would mine this for comedy — even Apatow would have, once upon a time — but not The King of Staten Island. Yes, the film is funny, but Scott’s pain is always at the forefront, so when we laugh at Scott’s antics, there is an underlying sadness and melancholy to his actions that informs the character far better than any two-minute trailer could demonstrate. On paper, you could call The King of Staten Island a comedy, but it really isn’t. In recent years, Apatow’s films have been less comedic, and more along the lines of a character piece.

If there is an era of filmmaking that The King of Staten Island emulates the most, it’s the personal films of the 1970s, where not everyone won their struggles as much as survived them, and the films of that decade took their time to explore their characters in the journey as opposed to moving them from plot point to plot point. It’s in the struggle, not the victory, that those characters found their true worth. We spend a lot of screen time with Scott raging and adjusting to the changes in his life, and see him handle each moment with varying degrees of success.

Scott’s relationship with his mother is complicated; Margie obviously loves Scott but has no idea what to do with him, and Marisa Tomei turns in another great performance as a woman who gets a glimpse of what her life will be like not constantly at Scott’s beck and call. Bill Burr’s Ray has his flaws; he wasn’t the best husband to his first wife (Pamela Adlon) and he might not be the best parent to his kids, but Ray is a multifaceted person who is trying to move forward from a time of trauma. The relationship between Ray and Scott is mostly adversarial but they also can see each other for who they are, apart from their flaws and their anger. Burr is quite good at exploring Ray’s complicated nature.

I also loved Steve Buscemi’s performance as a firefighter captain who knew Scott’s father back in the day, and considering that Buscemi was a real-life firefighter, he lends authenticity to the film. I’m surprised by Apatow’s hire of cinematographer Robert Elswit – Apatow’s films aren’t known for their camerawork – but Elswit gives everything a very 1970s look that fits with the mood of the film, and adds to the reality of this world.

It’s difficult to rank Pete Davidson’s performance here, considering that it’s his first major film role and that he co-wrote the script; how much of Scott is Pete Davidson and how much of Scott is the character from the page? Davidson fills Scott with wit and relatability, but also isn’t afraid to make Scott downright unpleasant to be around. Scott at his worst is a ball of storm and fury, and in other movies his schemes would be played merely for laughs. Here, though, we see them for what they are – cries for help from a manchild who doesn’t know how to express himself in any other way except through lashing out.

The moments of vulnerability that we see from Scott are well-earned, and Davidson plays them for all they are worth. Scott has an affinity towards Ray’s kids – perhaps because he’s still practically a kid himself – but we also know that these relationships are uncharted territory for him. Davidson bravely takes Scott to very dark places, and is unafraid to make Scott as obnoxious and as callous as the story requires, but there is an underlying sadness to all of it. We may not like Scott very much, but we understand him, and that’s all due to Pete Davidson’s performance. His work here is remarkable.

Most Judd Apatow films run long, and The King of Staten Island is no exception. The film is in no rush to tell its story, take thematic shortcuts, or to thrust its characters into unearned moments that a shorter, more direct comedy might. That may be frustrating for some, but for myself, I adored spending time with this world and its characters, even when they make bad choices or act out in bad ways. These characters feel like real people. There are a few story bumps here and there — I don’t like how Lou Wilson’s character disappears after one particular plot point, for example — but this is time well spent.

I found myself thinking about this film for quite a while after it ended. I found that I related with Scott more than I thought, and The King of Staten Island has a sneaky way of sticking to the bones more than expected. Only time will tell how this film will rank among other Judd Apatow works, but I have a feeling it will rise given some distance. It might, given time, be Judd Apatow’s best film. Full of terrific performances, a strong script, and a powerful emotional center, The King of Staten Island rules.

Universal Pictures will release The King of Staten Island On Demand June 12, 2020.

The glass-is-half-empty among us have been decrying the death of cinema for many years, triggered by the increasing focus on reinventing old...
Read more
Movies

The King of Staten Island Trailer with Pete Davidson

Universal Pictures has brought online The King of Staten Island trailer, which previews the film releasing On Demand June 12, 2020. The...
Read more
TV

The King of Staten Island to Release On Demand June 12

Universal Pictures announced today that The King of Staten Island will release On Demand on June 12. The film was originally scheduled...
Read more
Streaming

No film based on a true story is really about it’s subject, or at least not wholly about it. Sure, there’s a...
Read more