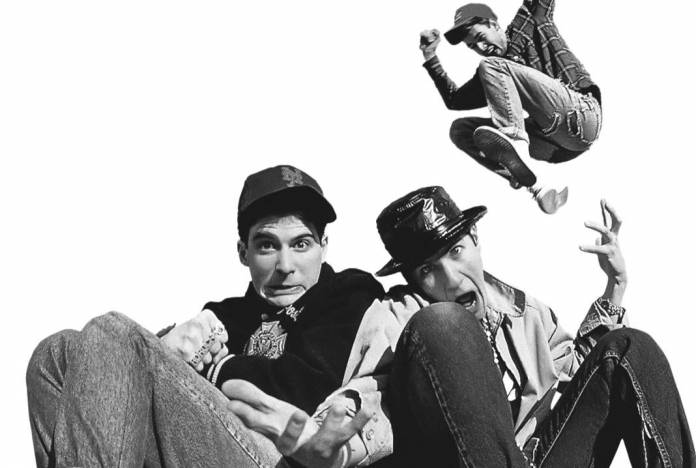 Spring, 1987. I’m a senior in high school. I’m sitting in the back seat of my friend Bill’s lime-green Chevy Nova. We’re in the parking lot of a Kroger’s, and we’re all a little drunk. Some of us more than others; we’ve been drinking beers, and right before we left the party at Heather’s house, we started mixing Everclear with Kool-Aid. Not a drink combination I recommend, especially as a teenager. Right now, we’ve got Licensed to Ill in the tape deck, grabbing shopping carts, and as Bill drunkenly drives, we hold carts next to the car, and Bill speeds through the lot and we let those shopping carts fly. “ALI BABA AND THE FORTY THIEVES!” we chant at the top of our lungs as we do it. As I drunkenly scream in the backseat, and we bail before security shows up, my father is home, dying of cancer, in a specially-made air bed that keeps him from putting his body weight on his back to prevent bed sores. We’re stupid, 17, blitzed, and at that moment, no matter what is happening at home, I know we will live forever. It’s not a belief – I know it.

Late summer, 1989. I’m 19 years old. The Beastie Boys’ latest album, Paul’s Boutique, has just been released, but I didn’t buy it. I had moved on from that frat boy mentality, or at least, somewhat. My dad had since passed away; I was living with two friends at the time, and quietly in love with one of them, although that wasn’t meant to be. I was lonely, in pain, flunked out of college, and while Paul’s Boutique would later become one of my all-time favorite albums, I was too wrapped up in myself to notice its release and quick dismissal from the critics at the time. Later, of course, Paul’s Boutique would turn out to be one of the most influential rap albums ever made. (It’s also got my favorite Beastie Boys’ lyric of all time: “Because they got more stories than J.D.’s got Salingers!”)

April, 1992. I’m 22 years old. I am living alone in an apartment in Bellaire. I don’t have any power in my home, having for months not paid the bill. Instead, I basically live at Auchan’s, a mega-supermarket that sells all sorts of things – think a Wal-Mart but with a food court, open 34 hours. It doesn’t exist anymore. The Beastie Boys’ Check Your Head has just come out on CD, and I was there that Tuesday to pick it up. The album plays like a mix tape; all sorts of different genres smashed together in one album. Sitting at the Taco Bell in the food court, I play it on my headset, careful not to jostle it so as not to skip a track. Then “Time For Livin’,” the B-Boys punk track cover, hits, and in about two minutes my life changes. Again. I am not the same person at the end of that song. Music was a big part of my life at that time; I was the idiot who wore grunge flannel in Texas, and again, the Beastie Boys were there at what seemed to me an important moment in my life, although almost 30 years later it’s hard to remember just what I was thinking at the time. But in 1992 I am not the same person I was in 1989, or 1987. Change is the only constant.

Spike Jonze’s amazing “live documentary,” Beastie Boys Story, is ostensibly about how the hip-hop/rap/punk/funk band came to be, from their early days in New York, their first single “Cookie Puss,” to Licensed to Ill and into history, but it’s really a story about growing up. About three men who learn to put away childish things but still manage to find their voice and their souls; about three kids goofing around in a sound studio, until one day they discover that they actually have talent and a vision outside of how the world perceives them. Jonze films Beastie Boys Story as a live performance, with Michael “Mike D” Diamond and Adam “Ad-Rock” Horowitz on stage promoting Beastie Boys Book.

Adam “MCA” Yauch, having passed away in 2012, is also present in interview footage played throughout the show. It’s an unconventional way to make a documentary, and Beastie Boys Story turns into half documentary, half live show. But Jonze trades that cinematic distance that a more conventional documentary would have for the immediacy of a live show. The result is that each story feels less like something told as much as they feel like something lived. Most music biopics and documentaries chart the history of the bands they cover as pieces of time that happened; Beastie Boys Story is more introspective and emotional about how these kids from New York became the biggest act in the 1980s, before disappearing and reconfiguring themselves as artists.

It’s hard to encapsulate a decades-long story into a two-hour live show; for those interested in a deeper dive, the Beastie Boys Book (and the audiobook is one of the very best audiobooks out there) is a great read. But what Beastie Boys Story does to an amazing degree is let us walk around in Ad-Rock’s, Mike D’s, and MCA’s shoes. We feel that adrenaline rush of working with Rick Rubin and Russell Simmons, of touring with RUN DMC and Madonna, of having the whole wide world in front of you and what it’s like when no one tells you no, even as in your heart you start to become the very thing you hated and made fun of.

But you also get that feeling of creation, of making art out of nothing but beats and rhymes. I love how both Diamond and Horowitz describe when they wrote “Hold It Now” from Licensed to Ill, how mixing some samples and beats together comes together into something new, and the disappointment of having the rug pulled out from under them just as they began to find themselves as musicians, through releasing an artistic breakthrough like Paul’s Boutique that no one bought for years, to the bass riffs of Yauch that turned into “Sabotage.”

Beastie Boys Story is often hilarious; Diamond and Horowitz are honest and self-deprecating as they relive their tours and their recordings, and Jonze often adds to the humor with some well-timed “glitches” that again capture the unpredictable nature of a live show. But Beastie Boys Story doesn’t shy away from the emotion, either. Both Diamond and Horowitz are overcome several times as they talk about their friend Adam Yauch, and how Yauch inspired them to become better artists and better men. It’s a natural progression, but we see these immature, crude misogynistic caricatures grow into mature, thoughtful artists. Further, they make no apologies for those changes in themselves; while Diamond and Horowitz freely acknowledge their sexist past, they also make sure that they wouldn’t be the men they are today without those experiences, or as Adam Horowitz puts it, “I’d rather be a hypocrite than the same person forever.” They credit Yauch for pulling them through their extended adolescence and giving them focus, drive, and purpose. It’s hard not to cry as they describe their last show with Yauch, or Yauch’s Free Tibet concerts, his social activism, and the pure talent he gave to the band.

Spike Jonze has always been a conundrum as a director; this is someone who came up shooting skateboard videos and took part in pranks with the Jackass guys, but he is also the artist behind films like Being John Malkovich and Her. Jonze isn’t a filmmaker that wallows in easy sentiment, but he also doesn’t flinch from genuinely emotional, cathartic moments. With Beastie Boys Story, Jonze marries his anarchism with his craft, and Beastie Boys Story feels alive and unpredictable even as it shows Jonze’s growth as an artist.

Jonze would not be the director he is today without the journey he took to get here, and like the Beastie Boys, recognizes that his past informs his present. Jonze has a long history with the Beastie Boys, and another director might not have been able to tap into the camaraderie and joy that Jonze shares with Diamond and Horowitz. When Adam Yauch died in 2012, the band ended, but the music endures, and that journey they took is a story that we can, and should all relate to in 2020 – we can all change. We can all grow. We can still have the same joy that we had as we were kids, the hunger and drive of youth, tempered with knowledge of the world and how we should fill our place in it.

It’s April, 2020, and I am at home, during a pandemic, and I have been married for 24 years, with a lovely wife and adult daughter. I can look back on my past with clear eyes, and remember all of it – the joy, the pain, the anger, the fear, and I know that during difficult times the best way out is through, always has been.

Previously announced as a Showtime series, Apple TV+ has ordered Hedy Lamarr, which will star and be executive produced by Gal Gadot...
Read more
Streaming

Following the global fandom around the recent debut of the Apple TV+ shorts Fraggle Rock: Rock On!, Apple has announced a new...
Read more
Streaming

Netflix has revealed the trailer and premiere date for Jeffrey Epstein: Filthy Rich, the documentary series launching on the streaming service May...
Read more
Streaming

The Right Stuff to Premiere on Disney+ This Fall

Kingdom of the Mummies First Look

Sony Interactive Entertainment has brought online an extended The Last of Us Part II commercial, which features Ellie on the run from...
Read more

BBC One Renews The Capture, Acquires The Heights

BBC One, Heyday Television and NBCUniversal International Studios’ surveillance thriller The Capture will return for a second series. The first series was...
Read more

AMC has debuted a new look at the second season of NOS4A2 which you can watch using the player below. The second...
Read more