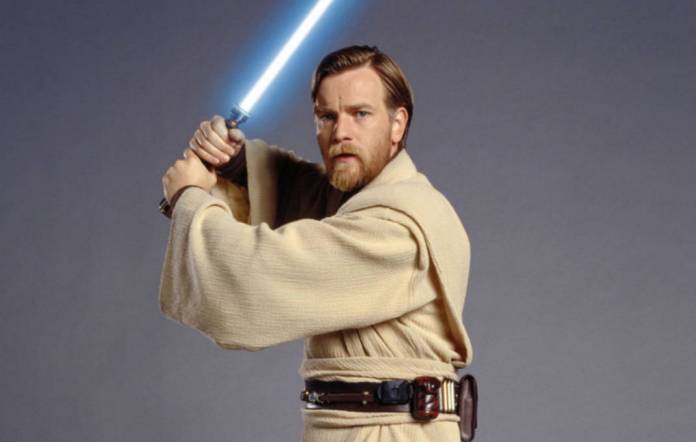 The purpose of Star Wars Thrills is to put all the Star Wars news from the week of April 3, 2020 in one location. This week, we’ve got the mystery of the Falcon’s triangular radar dish, a new writer for the Obi-Wan Kenobi series, The Mandalorian Season 2 rumors, a new 501st Lego set, and much more!

Immerse yourself into Star Wars #TheRiseOfSkywalker with the 360 VR Experience! Unlock it directly from your phone, by scanning any Star Wars: #TheRiseOfSkywalker Digital, Blu-ray or 4K UHD product art. Click here to begin your journey now: https://t.co/s6NLLoy9Nu pic.twitter.com/mimf02O7vh

“A maquette for another character I designed for #TheRiseOfSkywalker – The Eye of Webbish Bog aka The Oracle. We built & shot this insanely massive submerged baby head & symbiotic spider creature [but] the scene was lost in the edit.” – Jake Lunt Davieshttps://t.co/lW74tdijuB pic.twitter.com/byAsreiBnD

“Original concept art for Lando’s disguise in #TheRiseOfSkywalker. I had this idea for a helmet that in silhouette would look like a battered cowboy hat with the brim folded up at the front.” – concept artist @glyn_dillon #StarWarshttps://t.co/10nvVJFdJjhttps://t.co/87Pe0Oa6o8 pic.twitter.com/Cm2qsGySOw

Watch Star Wars: The Rise of Skywalker's D-O in a Behind-the-Scenes Cliphttps://t.co/XayMognSuy

#StarWars #TheRiseOfSkywalker may have been rewritten even more than you thought: https://t.co/b2gpvFpu1m

Solo: A Star Wars Story Screenwriter Says No One is Planning a Sequelhttps://t.co/FZKLrZ3kEj

Certainly appreciate but hard to advocate for & here's why: with multiple SW series in development/production, set at different points in the timeline. Without knowing what stories they're telling (& I don't) hard to know what a Solo series would even be with so much on the way.

Following the tricks used in ANH, this is a cut out of a B-wing that is painted to look like it is really fully built. They used the same trick for the engines on the Blockade Runner in the Resistance Base too. pic.twitter.com/zGuWakBeSV

Variety is reporting that Joby Harold will write the Obi-Wan Kenobi series coming to Disney+. He takes over writing the series from Hossein Amini, who left the project back in January.

The Armorer doesn't have enough #beskar to make everyone protective gloves. Do your part and #WashYourHands for 20 seconds. Help prevent the spread of #Covid_19 #Thisistheway #armorer #TheMandalorian #StayAtHomeAndStaySafe pic.twitter.com/l6yt5XWw1f

Ben Solo, Han, and Chewbacca are on their way back to the Millennium Falcon, but the Bug Hunters are in pursuit and they've got a score to settle with Ben !
Watch more #StarWarsRollOut on the Star Wars Kids YouTube channel! pic.twitter.com/OQ4wloAvrg

Andrew Jack was the dialect coach on SOLO, and a kind and thoughtful man. We asked him to teach Alden to speak Shyriiwook, and I’ll always remember listening to them gargle-roar at each other back and forth.
RIP https://t.co/ivlE7q4guB

Andrew was so welcoming — the way so many Star Wars crewmembers were— he loved sharing his love for these stories and was generous and supportive with his expertise. A welcome presence and always a breath of fresh joyous air on set. We’ll miss you, rebel. https://t.co/gG2tzsIKPP

It was always a pleasure to spend time with Andrew especially when I was out of costume, just hanging around the set or at the coffee tent outside our trailers. 3PO didn't require his dialogue services but many of us knew him as a charming & funny & wise & entertaining companion. pic.twitter.com/PGzjr0muL7

I had a good day today. Then I heard Andrew Jack had been killed by the C.Virus. He was a joy to be with on the new trilogy. As dialect coach, he helped the cast get it right through his talent and humour. As an actor, his distinguished features made him stand out in any scene. pic.twitter.com/p4HFsFknfl

“Part of an opening scene concept for #StarWars: #TheForceAwakens. I tried to copy the opening of A New Hope but showing now derelict Star Destroyers being towed in and dropped as junk on Jakku…” – design supervisor Christian Alzmannhttps://t.co/lVKV4JaQXD pic.twitter.com/SsqPAUph5p

During quarantine I imagined we lived in a world where we had a Lando Calrissian spin-off series pic.twitter.com/6MDe7hrXYX

Regarding the Easter Eggs in the Star Wars prequels (I was the Animation Director on those movies), the "rule" was, animators could add something to the background as long as it did not pull the audience's eye from the primary focus of the shot. The "Eggs" added extra detail 😀 https://t.co/WvsJ8nXp7I

I've been asked, "Was Coleman Trebor named after me?" — Yes, George Lucas (with a suggestion from John Knoll) named him after me. "Trebor" is Robert spelled backwards. Later, there was an action figure & a LEGO minifig. Very cool 😁 pic.twitter.com/bPYKOJNkkV

What some of you may not know is that George Lucas & Rick McCallum asked me to direct the live-action Wookiees for the Kashyyyk sequence in "Revenge of the Sith" (2005). I am forever grateful for that opportunity. pic.twitter.com/igHOiXekzm

The author of The Art of #TheRiseOfSkywalker discusses the new book and the concept art phase of #StarWars movies: https://t.co/UO3fLEql2H pic.twitter.com/Y7buhFovsr

Get a closer look at the new villain leading a resurgent Shadow Wing in Shadow Fall. The next #AlphabetSquadron novel, coming in June.https://t.co/4pmaxip3eF

This week in Star Wars, Lucasfilm has an exclusive first look at concept art of the Jedi from Star Wars: The High Republic; a character reveal from Star Wars: Shadow Fall, the sequel to Alphabet Squadron; and new toys including a LEGO set inspired by the 501st Legion and more Hasbro action figures.

paintings I did for Jedi: Fallen Order in 2016 pic.twitter.com/y1yEzipevC

For the Republic! The 501st Legion march into battle with a new set from LEGO: https://t.co/5n5DDTfHgW pic.twitter.com/MQCPNRn54H

We are thrilled that Hasbro has allowed us to bring you this first look at the upcoming Vintage Collection K2S0 figure! #StarWars #TVChttps://t.co/u66O1MJKbX

Collectors, this is the bounty you're looking for. 7 new #StarWars Black Series figures have been revealed: https://t.co/o6OVj23uMn pic.twitter.com/loThEYsBzh

Previous articleQuibi’s 50 States of Fright Trailer, Punk’d Stars & This Joka Announced
Next articleSelah and The Spades Trailer Revealed by Amazon