As we enter holiday vacation mode, VitalThrills.com is rounding up the latest in theme park news and highlights in our new feature, Theme Park Thrills. Find out about can’t-miss experiences in the parks this winter, the latest in VR worlds, and what’s in store for the future of attractions.

Let’s unpack what’s going on coast to coast. Christmas is taking over the resorts where rides like Hagrid’s Magical Creature Motorbike Adventure at Universal Studios Orlando braces for holiday crowds. Walt Disney World prepares for the opening of Star Wars: Rse of the Resistance in December at Star Wars: Galaxy’s Edge. The West Coast Disney and Universal parks bring back festive staples in advance of big changes in 2020, while The VOID adds a big new movie title to their roster of VR experiences. And we take a quick look at new ride vehicles coming out of IAAPA 2019 with a dash of international fun. We’ve got Marvel hotel updates from Disneyland Paris!

Here is your first edition of Theme Park Thrills and stay tuned for more!

Disney Parks recently revealed the poster for Mickey & Minnie’s Runaway Railway and it gives us a glimpse of some underwater adventuring with Mickey and Minnie. The ride will take park goers through scenes inspired by the latest generation of Mickey Mouse shorts that were broadcast on the Disney Channel and went viral on YouTube. They’re always eye-catching and so easy to get into when you walk by them playing on Disney Resort screens with their twists on Mickey and friends. They’re outrageously funny, random and with memorable moments (WHAHAPUN!) we hope to see in the ride! Some of the episodes that are my go-to recommendations are “Wish Upon a Coin,” “Potatoland,” “No,” “Shipped Out” and “Carried Away.” You can binge them on Disney+ – trust me after you do, you’ll be so excited for this ride! The shorts are endlessly rewatchable and they are so many of them. The ride opens in Spring 2020 at Walt Disney World and 2022 at the Disneyland Resort.

The VOID | Jumanji: Reverse the Curse

After seeing Jumanji: Welcome to the Jungle it totally crossed my mind that it would be really cool if we could go into the game like the characters in the film. The VOID has made that into a virtual reality experience just in time for Jumanji: The Next Level hitting theaters. Following up the success of their immersive attractions based on Star Wars, Ghostbusters and Avengers with Jumanji: Reverse the Curse is genius! It’s very much set up so you could become one of the four main avatars from the 2017 film. You can step into the roles of Dr. Bravestone, Ruby Roundhouse, Mouse and Shelly Oberon on another adventure in the jungles of Jumanji. And yes, Dwayne Johnson, Kevin Hart, Jack Black and Karen Gillan voice their respective characters!

This experience is their most adventurous yet! There are thrills taken to new heights (literally), dangerous animal encounters (arachnophobia warning) and amazing moments that are so true to the world of the film. Sony Virtual Reality and The VOID worked closely with the film’s director, Jake Kasdan, to create a journey that would be authentic to the Jumanji game universe. You see familiar faces in gameplay – each character’s strengths are vital to getting each other through the levels and you DO have the three-life rule in place. Yes, you see each other die – it’s hilariously brutal to potentially get eaten as you go along. This one was so intense at one point, I raised my visor to remind myself it wasn’t real. The experience begins at nationwide and international locations of The VOID on November 27, 2019.

This week Orlando, Florida hosts IAAPA 2019, the theme park and attraction experiences industry trade showcase. Here’s where you go to see the latest innovations in ride vehicles and consumer offerings that you might see pop up in a theme park’s future. Last year, we got a glimpse of the Disney Skyliner. Here are the coolest things we’ve seen come out of the event so far…

There’s a crazy ride from SBF Visa that’s going viral for it’s spinning human hamster-wheel component. Watch theme park Vlogger Tim Tracker try it out. Europa Park’s Paddington on Ice show won the IAAPA Brass Ring Award for most creative stunts show. It’s a crime that Paddington remains underappreciated here in the states. So… if you want to see this show, you’ll have to go to Germany or the UK’s Hyde Park. SeaWorld San Antonio also revealed the ride vehicle for its Texas Stingray coaster, opening spring 2020. It will be the tallest, fastest and longest wooden coaster in Texas. And LEGOLAND New York unveiled a ride vehicle that will turn you into a mini-fig in a LEGO factory adventure ride. Later on during the event, Meow Wolf CEO and Co-Founder will lead a discussion on the consumer’s movement toward creative forms of futurist driven participatory entertainment. Hopefully we will get an announcement on the 2020 opening date for the Las Vegas location of the cult fave New Mexico immersive art installation. We’re really looking forward to this one opening in the Vegas Area 15 complex and see how it will challenge conventional theme park experiences.

Reservations are now open and available to book for Disney’s Hotel New York – The Art of Marvel. The Disneyland Paris hotel’s redesign is inspired by the work of concept artists like Andy Park, Mark Ferguson and many others on the teams that have created the visuals of over 10 years of Marvel Studios films. With that in mind, it will house the biggest collection of Marvel art through all of its rooms and spaces. It will also offer unique experiences and Marvel character interactions. If you book before December 4th, you’ll be able to get in on a dining offer: a half-board meal plan which entitles you to breakfast at Disney’s Hotel New York and one meal (lunch or dinner) per person per night booked at select locations. This makes a Disneyland Paris trip top our bucket list, but while we wait we’ll just watch their delightful videos on their active YouTube channel. They just uploaded this year’s holiday season kick-off Tree Lighting ceremony and if you’re having Halloween withdrawals, I recommend checking out their villain-centric videos. If you’re brave enough…. 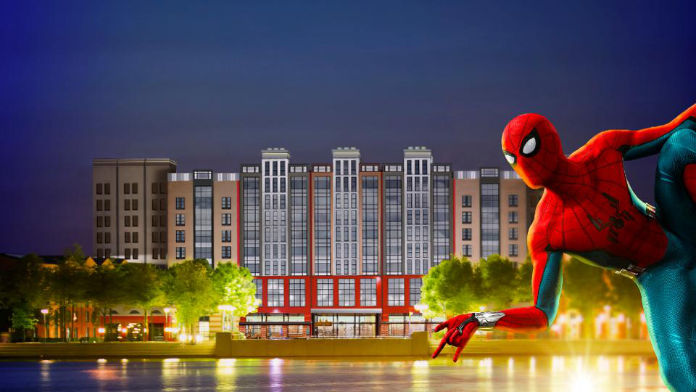 The holidays are underway with seasonal favorites returning at the Disneyland Resort and filming underway for their annual televised Christmas special. We happened to be in the parks on the night that Portugal. The Man played the first ever concert in Star Wars: Galaxy’s Edge West on a chilly night in the middle of the week. Seeing Christmas lights and fireworks over the Falcon to a medley of live Christmas music past park closing was unbelievable. Worth sprinting from the other side of the resort from the Festival of Holidays food trail at California Adventure, where we were enjoying returning faves. We consider the best of the fest to be the following:

Check these out and more in the official Disney Foodie Guide on the Disney Parks Blog. 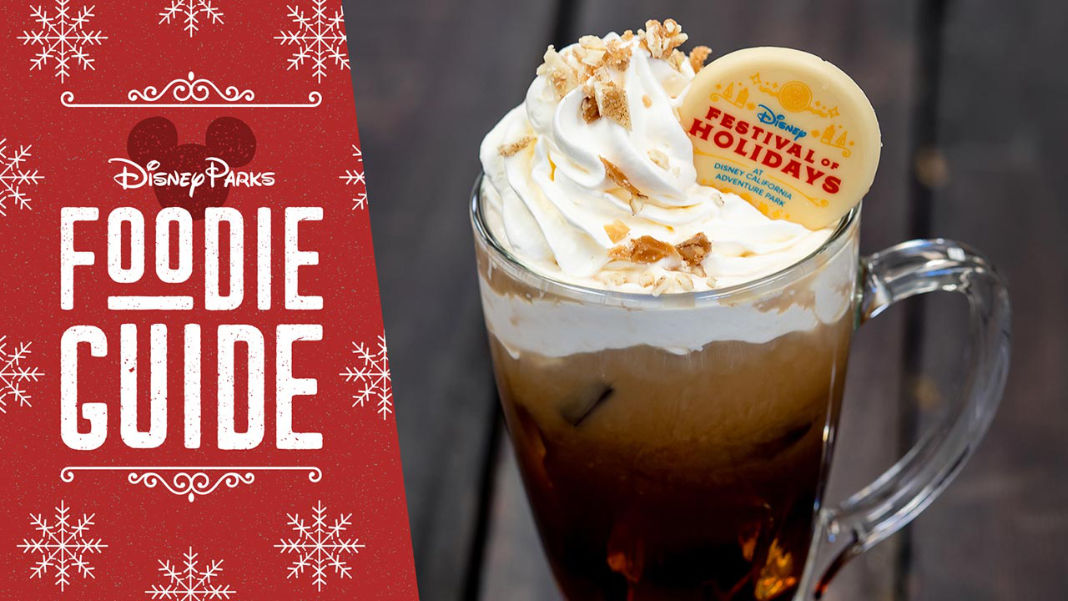 Seeing the Christmas Lights on Hogwarts Castle for the holidays in the Wizarding World while sipping hot Butterbeer in my Gryffindor house colors is so close I can almost taste it. November 28th can’t come soon enough and Grinchmas also makes a return to crash the festive fun until Dec 29th. 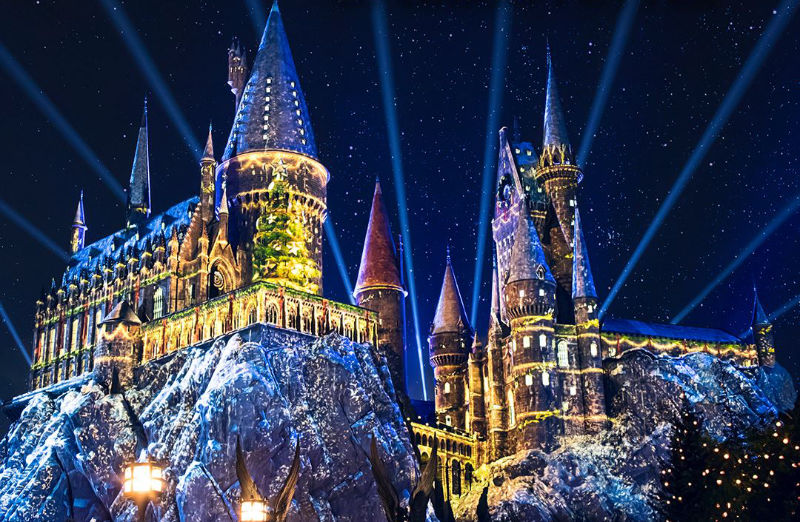 Last week, Orlando rang in the spirit of the season and running through January 5. This year’s offerings include Universal’s Holiday Parade featuring Macy’s that includes the Minions from Despicable Me, Shrek and the characters of Madagascar, as well as Grinchmas featuring The Grinch and Whos of Whoville. They also have winter magic in the Wizarding World with special experiences and their latest state of the art Dark Ride Hagrid’s Magical Creatures Motorbike Adventure.

Walt Disney World | Christmas and Rise of the Resistance

Christmas cheer has spread out to more of the parks at Walt Disney World. Fans of James Cameron’s World of Avatar can now find Christmas in Pandora. The characters living on their alien home brought keepsakes from Earth and decorations made from their new planet’s resources to celebrate the holidays. Magic Kingdom shines in it’s classic festive glory with select nights offering guests the chance to attend Mickey’s Christmas Party – a ticketed holiday event with special experiences and exclusive treat options. Epcot’s Festival of the Holidays is in full swing with a fun cookie trail around World Showcase and a new fireworks show: Epcot Forever.

And on December 5th, Star Wars: Galaxy’s Edge in Hollywood Studios finally opens its hotly-anticipated Rise of the Resistance ride where you will be able to join the Resistance to fight against the First Order. I’m still mad it’s opening before Disneyland’s, which is scheduled for next year. 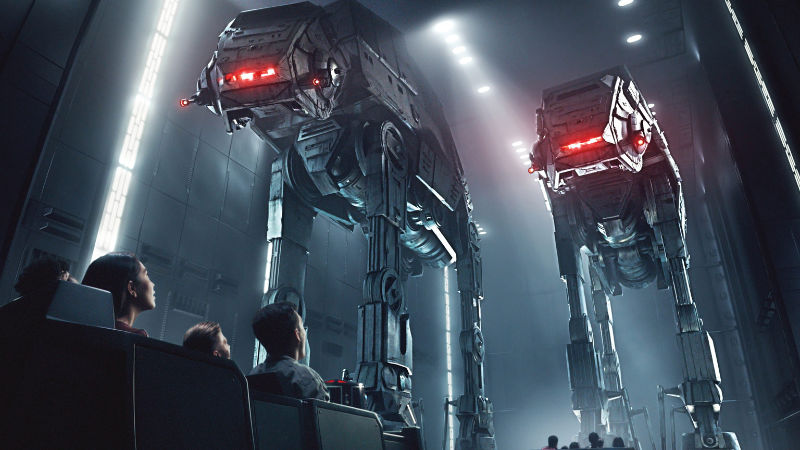 Are you planning on visiting the theme parks this Thanksgiving holiday? Let us know where you’re going and any recommendations below!

Theme Park Closures: Updates on the Disney and Universal Parks

If you were hoping to be returning to the biggest United States theme parks anytime soon, we've got some bad news for you. In...
Read more
Theme Parks

The purpose of Star Wars Thrills is to put all the Star Wars news from the week of February 7, 2020 in one location. This week,...
Read more
Theme Parks

Universal Studios Hollywood is celebrating Lunar New Year from now until February 9. We recently got a chance to check out the seasonal offerings....
Read more
Games

In today's edition of Theme Park Thrills, we've got new info on how to secure your boarding for Star Wars: Rise of the Resistance at...
Read more
Theme Parks

If you are going on a movie nerd-cation this holiday season, Universal Studios Hollywood and Universal Orlando Resort have all the must-do’s for your...
Read more
Theme Parks

Rise of Skywalker Locations and Characters Coming to Star Tours

Back to the Future 35th Anniversary Events and Products Announced

Universal is going back in time to celebrate the upcoming Back to the Future 35th anniversary - on the iconic fan-created anniversary date captured in the...
Read more

With current events keeping theaters closed and movies being pushed back on a daily basis, the biggest update yet has come in from The...
Read more

Universal Pictures today announced that the Candyman release date has been moved from June 12, 2020 to Friday, September 25, 2020. The studio's Praise This, which was...
Read more
Load more