The Flash Episode 6.2 Recap: Barry Faces Death in A Flash of the Lightning

Grant Gustin and Candace Patton shine in this episode as Barry and Iris come to terms with the devastating news that Monitor delivered at the end of last week’s episode.  It’s almost as if they have begun the grieving process but are at different steps. Barry broods from the start, bemoaning the fact that he thought he had time to change his fate. Where Barry is in shock, Iris is in denial. She refuses to believe that Barry’s fate is sealed. After all, if the date on the article can change, then so can the future. She is all business, convincing Barry to get up and do something to make that change.

First step, get a second opinion. Barry decides to travel to the future to find out what happens the day after he is supposed to die. Iris did not like the idea of Barry going alone, but he produces a mobile Gideon device that will help him should he need it. Barry tries running through the pipeline to get to the future but the timeline is blocked by antimatter and he is injured before he can get there. He doesn’t know how to get past the blockage but Gideon does. She suggests that he visit Jay Garrick (John Wesley Shipp) on Earth 3 who is an expert in everything antimatter.

When Barry gets to Earth 3, Jay tells Barry that travelling to the future is a good idea because he has been tracking antimatter signatures across the multiverse. And while Barry may not be able to get to the future physically, he may be able to go there with his mind by using a piece of technology that Jay has created with his original Flash helmet.

As Jay discusses this option with Barry, they are interrupted by the appearance of Jay’s wife, Joan Williams (Michelle Harrison), who looks surprisingly like Barry’s mom. It is a nice moment for The Flash, harkening back to the very first season and the start of Barry’s hero’s journey. It was his mom’s death that started it all. 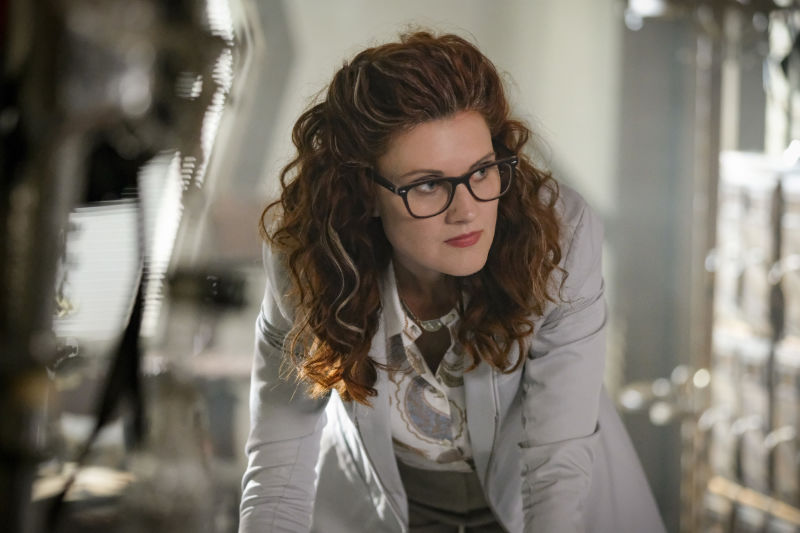 Barry’s mind travels into the future, and it is not easy. Not only is Barry in physical pain, but he is experiencing billions of timelines, where billions of lives are lost. He watches helplessly as his loved ones are seemingly swallowed up by antimatter and turned to dust. (The effects here are very cool to watch and reminded me of the cover art of the original comics by George Pérez. Barry watches Iris die, and when we see the antimatter break up the Flash, the effect is devastating. Not only is the scene reminiscent of the comics, the title of the episode is also the title of the comic, Crisis on Infinite Earths #8 – DC Comics, in which the Flash dies.)

Jay and Joan bring Barry back, but by this time, he is suffering from neural entropy. When Barry comes to, Joan is at the foot of his bed, reading poetry to him because she read that poetry can restore neural pathways. Barry tells them what he saw and he now knows Monitor is right. He has to die to save billions.

Jay and Joan bring Barry back to Iris. Iris tells Joan that she looks just like Barry’s mother. Barry convinces Iris that he is okay, so she goes off to the paper, while he recovers on the couch. While Iris is gone, Joe shows up to discuss the episode’s other case but sees that Barry is distressed. A tearful Barry tells Joe that he has to make a sacrifice, but it feels like giving up. (Here’s where we get our weekly heart to heart talk, and I realized how much I missed the Joe/Barry interactions.)

Joe relates a story to Barry about the time that he was almost killed by a bullet in the early days of his police career. The thing that gave him the courage to go back to work was his badge. The badge, like the Flash emblem that Barry wears, are symbols of strength of their charges to protect the people. Joe explains that doing one’s duty is not giving up, it’s resilience. It is an inspiring talk.

So, what is this case that Joe had brought to discuss with Iris? A girl, Allegra Garcia, who has been in and out of jail since she was young, was charged with murder. She is a metahuman with the power to control radio waves. She uses this power to steal cars and was identified after a person was found dead in his car. It seemed like an open and shut case, until Cecile, who went in as the prosecuting district attorney, was convinced through her own metahuman powers, that Allegra was innocent. Allegra was released on bail, but Ralph and Iris, who were recruited to help prove her innocence, later found Allegra hovering over the body of the man who identified her. 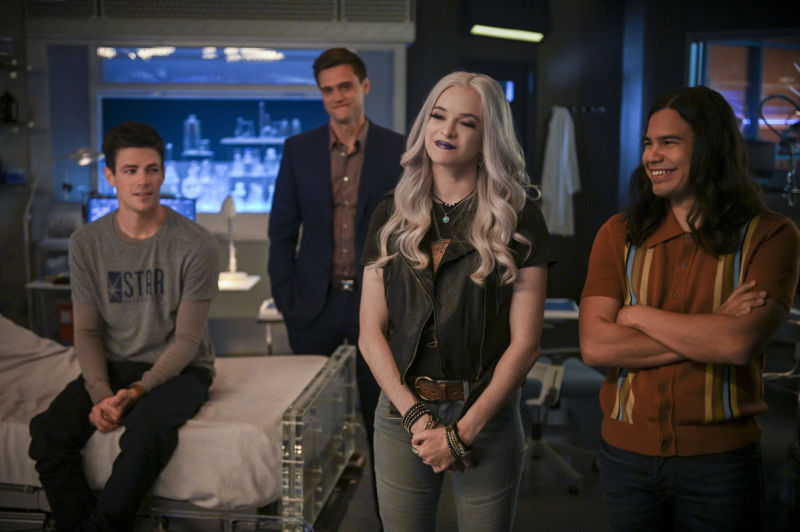 Allegra tries to get away, blasting Ralph in the face with ultra violet waves for a wicked sunburn. But Joe was there and captures Allegra with power dampening cuffs. Cecile is still convinced she is innocent and that she knows who committed the murder. Joe and Cecile have it out – Joe explains to Cecile that her job is to use the facts and evidence to prosecute, but Cecile wants to trust her gut and not put someone away who is innocent.

It turns out there is someone else who Allegra suspects. Her cousin Esperanza was with her the night the particle accelerator exploded, but she thought Esperanza was dead. Ralph and Cisco dig up information on Esperanza and it turns out she didn’t die. She was carted away by a super-secret organization that is training meta’s to become assassins. Wow!

Right on cue, Esperanza shows up at CCPD to kill Allegra. After all, if she is a super-secret assassin, anyone who knows she is alive is a threat. Joe, who is back at CCPD by now, tries to stop Esperanza but bullets have little effect, so he calls Barry. Barry shows up as the Flash, and faces down the masked Esperanza. At first, she overpowers him but with the echoes of his heart-to-heart with Joe ringing in his head, he gets up and faces Esperanza head on, fighting his way through the barrage of ultra violet waves she levels at him, until he is close enough to knock her out.

All’s well…for now.  Barry and Iris decide to deal with Monitor’s predictions of Barry’s death together. The first step is to clue in the rest of the team. Allegra shows up at the Citizen to become part of Iris’s growing newspaper team. And Cecile explains to Joe that she no longer feels effective as the district attorney and now wants to become a defense attorney for metahumans. Joe thinks that is a great idea.

But of course, there has to be a cliffhanger: Dr. Rosso (Sendhil Ramamurthy) accidentally kills someone with his meta powers acquired last week after taking his homemade cancer cure. He takes the dead body back to his lab to research this new meta ability. It turns out the stiff’s blood had coagulated by some foreign substance that he wants to examine under a microscope. While his back is turned, the dead body pops up from the table and begins to go on the attack. Uh oh…..

I enjoyed this episode of The Flash, even with the darkness of the upcoming Crisis, and Barry’s impending death looming over it. I’m not ready for that. What did you think of the episode? Add your comments below. You can watch the promo for the next episode, titled “Dead Man Running,” using the player below.

Following the premiere of The Walking Dead Midseason 10, the cast and creators are taking fans behind the scenes of Daryl, Carol and the group's perilous...
Read more

Paramount Pictures' Sonic the Hedgehog remained in first place for a second-straight weekend at the North American box office, though The Call of the Wild opened...
Read more