Maelyn Jarmon and John Legend on The Voice Finale 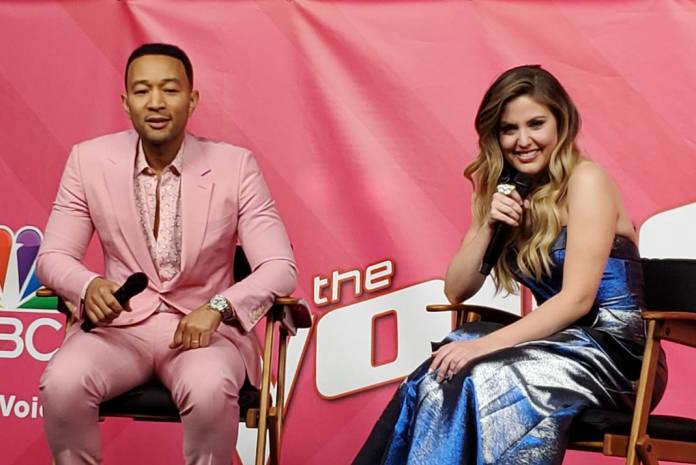 John Legend has a message for Blake Shelton. “I really love Blake and I’ve really enjoyed getting to know him this year. He’s a very arrogant bastard,” Legend joked with reporters at the winner’s press conference following the show. “I had a feeling he was going to kiss someone’s ass after this show and I was right.” The two were the only coaches to have contestants in the season 16 finale of The Voice.

The country crooner had Gyth Rigdon, Dexter Roberts and Andrew Sevener, while the first-time Voice coach had Maelyn Jarmon, who was crowned the winner.

“Blake’s fan base is very strong and I think the country fanbase that watches The Voice is very strong and they’ve been voting a lot and supporting a lot of his artists,” Legend said when reporters after the win when asked if Blake’s three country artists split the vote. “There was a lot of really great competition. I really thought the finale yesterday was fantastic. A lot of really great performances by all four artists, but I do think it probably gave us a little bit of an advantage to stand out from the crowd. Maelyn’s the only woman and the only non-country artist.”

Maelyn Jarmon, who got a four-chair turn, said it was a no brainer to have Legend as her coach.

“I knew that he was fresh to it and that he’d be excited and he absolutely was. He has so much knowledge and he’s a storyteller. I was so connected with him before I even got on the show. I knew that I wanted to work with him. He knew how to pick songs for me and once he heard my voice, he knew what would work and sometimes suggested things that I wouldn’t have done and then they ended up being moments for me. It’s because he has that knowledge. He said I could’ve done well with any coach, but the truth is those song choices are everything.”

From the beginning, Jarmon, 26, has impressed the coaches and fans with her incredible talent and moving story. When she was just two years old, the Texas native had tubes inserted into her ears to treat recurring ear infections, but there were complications and the tubes damaged her eardrums leaving her deaf in her right ear and only 80% hearing in the left ear.

But that didn’t deter the artist from pursing music. “I’ve considered it a superpower since I was young,” she told reporters. “It was never discussed as a disability through my house. It was never really talked about much at all.”

“I didn’t know how [the show] was going to turn out because I had never been on this kind of platform or worked with in-ears before and that had its own challenges,” she continued. “Last week, my in-ears went out halfway through my performance, and I couldn’t hear anything anymore. When that has happened to me before his show because I sometimes can’t hear, I’ll go based off feeling. I was able to do that in that moment because of my practice with that in the past. It has been, sometimes, an issue but mostly an advantage.”

The star-studded finale had major A-list power and featured performances by Taylor Swift and Brendon Urie, Hootie and the Blowfish, BTS, the Jonas Brothers, Halsey, OneRepublic and more.

Jake Hoot may have only been a one-chair turn in Season 17 of NBC's The Voice, but the 31-year-old artist just proved his talents by...
Read more
Music

NBC's The Voice Season 17 finale is here and for the first time in seven seasons, every coach has a contestant still in the competition....
Read more
Music

Nick Jonas Announced as The Voice Coach for Spring 2020

NBC has announced that multi-platinum Grammy and Golden Globe Award-nominated recording artist, actor and award-winning songwriter Nick Jonas will be a The Voice coach for...
Read more
Music

The CW has released the new Supergirl Season 5 poster, which features the tagline "United We Stand." The anticipated fifth season of the series...
Read more
TV

Hulu has announced the movie and titles coming to the streaming service this fall. The Hulu Fall 2020 original programming slate included...
Read more