There were cheers and tears in the The Flash Season 5 finale, bringing the season’s stories of legacy to a bittersweet close. The episode begins with a voice over by Nora (Jessica Parker Kennedy) recapping her personal hero’s journey, while the scene picks up where last week’s episode left off – Ralph (Hartley Sawyer) jumps in front of the mirror gun to stop Barry from destroying Cicada II’s dagger. Ralph’s bold move leaves him in bad shape, with his cells temporarily inverted and unable to tell the team why he stopped their plan. Cicada II (Sarah Carter) once again escapes.

Thankfully, Sherloque (Tom Cavanagh) is there to tell the team about Ralph’s great deduction: he discovered Eobard Thawne’s plan to have the dagger destroyed in the past so that he could escape his own demise in the future. Nora now knows that she has made a grave mistake in trusting Thawne (also Tom Cavanagh.) The team has to decide: will they stop Cicada or Thawne? With countless lives of the world’s metahumans at stake, Barry decides that stopping Cicada has to be their objective.

Cicada has gone back to her cabin in the woods, where she is hiding her younger self.  She is still seeing visions of her dead uncle, who advises her to repair the time sphere and go back in time to the night of the particle accelerator explosion and release the meta cure toxins there. All the metas, including the Flash, would die then, without ever having the chance to destroy the world.

Barry and Nora discover a shard of wood at the scene in CCPD which is a clue to Cicada’s whereabouts. After reviving Ralph with a blast to reverse the effects of the mirror gun, Cisco used the wood clue to track down Cicada’s hideout. The team comes up with a plan to get older Cicada away from young Grace so they can convince her to take the cure. They go to the cabin but older Cicada intercepts them vowing to kill them twice in one day. Joe shouts, “Not on my watch,” and opens a portal that sucks Cicada back to S.T.A.R. Labs. Nora convinces young Grace to reverse her impending legacy of death to millions and take the cure, but to no avail. The dark matter in her head wound is too strong for the cure to work. 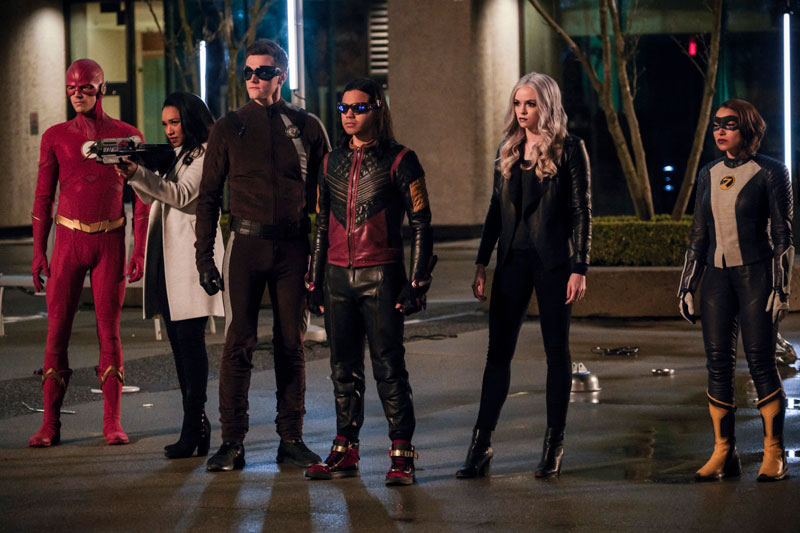 Cicada II escapes the lab and goes back to the cabin just after Grace gets the cure and fights with the team, using her blast powers to immobilize Barry. Pinning Nora to the ground, Cicada tells Barry that he will watch as she destroys his family the way that he destroyed hers. Cicada raises her dagger, about to plunge it into Nora’s heart, when Cisco sends a mirror gun through a portal into Barry’s hand, and Barry destroys the dagger. The blast from the gun also has a weird effect on Cicada II – she starts to turn to shards and dust and is destroyed.

Back in the future, this means that the dagger that was dampening the Reverse Flash’s powers disappears just before he is about to be executed. Thawne’s eyes glow red and he is able to kill all of his captors. But before he can make his escape, the scene starts to flow backwards and we see Barry and Nora show up at the prison. Somehow, Barry now knows how to reverse time! No problem for Thawne though – he still taunts them with the fact that he is the only one who knows how to manipulate the timeline to his own advantage and that Barry’s legacy is always to vanish, as predicted by that ominous headline from the future.

Nora and Barry start chasing Thawne through the streets of future Central City when the rest of Team Flash show up and an epic battle begins. With the use of the time sphere, Vibe’s portals, blasts from Killer Frost and blows from Elongated Man, Thawne is buffeted back and forth and finally cornered by Nora. Nora is about to kill Thawne but Barry and Iris stop her. Thawne says it would not have worked anyway… Nora is starting to turn to dust as well. The timeline was altered when the dagger was destroyed and as the new timeline settles in, Nora is glitching out of existence. 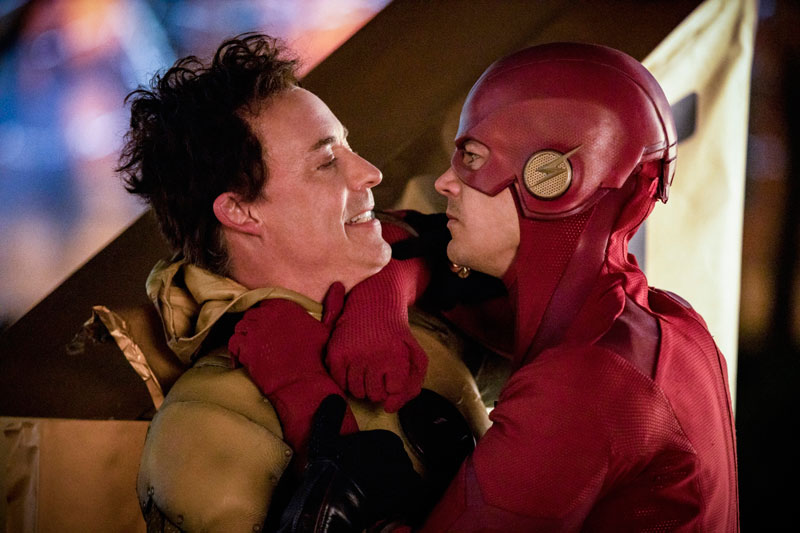 Thawne tells Barry that the only way to save Nora is to take her into the negative speed force. So now, Barry has to decide between letting Thawne go or saving his daughter. Thawne’s parting words to Barry are, “See you at the next crisis,” referencing this season’s crossover and teasing the upcoming Crisis on Infinite Earths storyline.

Nora and Barry speed off to try getting her into the negative speed force, but Nora stops, running back to Iris. Nora doesn’t want to be consumed by negative energy and become like Thawne. She tearfully tells her parents that she does not want that to be her legacy and she accepts her fate as the consequence for her mistake in trusting Thawne. It is an emotional scene as Nora dusts away with Barry and Iris’s arms wrapped around her.

The partings are not over for the team with Nora’s demise. Sherloque says his goodbyes and returns to his earth to be with his new lady love, Renee Adler. Barry, Joe, and Cecile are summoned to CCPD where Captain Singh tells them that he has been promoted to Police Chief, and that he would like Joe to take his place as Captain. Singh tells Joe that he will have help from Barry, saying, “Isn’t that right, Flash?” Singh is a detective after all, so it is right that he knows Barry is the Flash.

Cisco (Carlos Valdes), who has also been thinking about his own legacy this entire season, is saying goodbye as well. He no longer wants to be Vibe, preferring instead to be extraordinary on his own and live a normal life with Camilla. He tells Caitlin that this is what he wants and she administers the cure to him. Cisco also tells Caitlin that he left her a gift which hopefully will be a tricked out Killer Frost suit for next season. As he leaves S.T.A.R. Labs, Cisco smiles and we next see him walking down the street, arm and arm with Camilla. 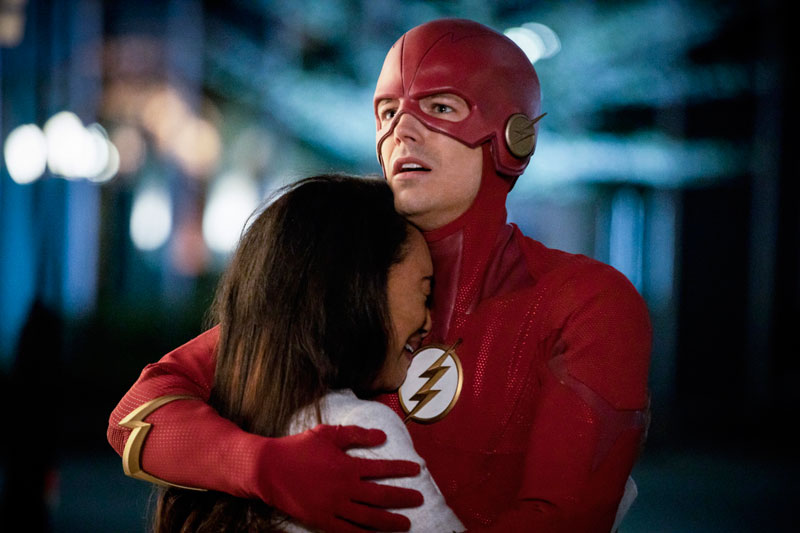 Barry and Iris are consoling each other in the time vault. They find a key that unlocks a recording that Nora made for them, in case things did not work out. This is the voiceover we heard at the beginning of the episode, and Nora tells them that she is happy that she got to know them and that she has learned how to be a hero. She loves them both, no matter what the future will bring.

After the grieving parents leave the time vault we see an ominous time warning. The newspaper with the headline about The Flash vanishing appears on screen, but the date of the headline is scrolling back from the future to 2019. Between this tease, and Thawne’s tease about the upcoming crisis, it seems that next season will be an epic one for The Flash.

Also upcoming for DC fans: Did you catch the teaser trailer for the upcoming Batwoman show? More to look forward to on The CW!

Following the premiere of The Walking Dead Midseason 10, the cast and creators are taking fans behind the scenes of Daryl, Carol and the group's perilous...
Read more

Paramount Pictures' Sonic the Hedgehog remained in first place for a second-straight weekend at the North American box office, though The Call of the Wild opened...
Read more