More
Home TV The Flash Episode 5.21 Recap: The Girl with the Red Lightning

The Flash Episode 5.21 Recap: The Girl with the Red Lightning 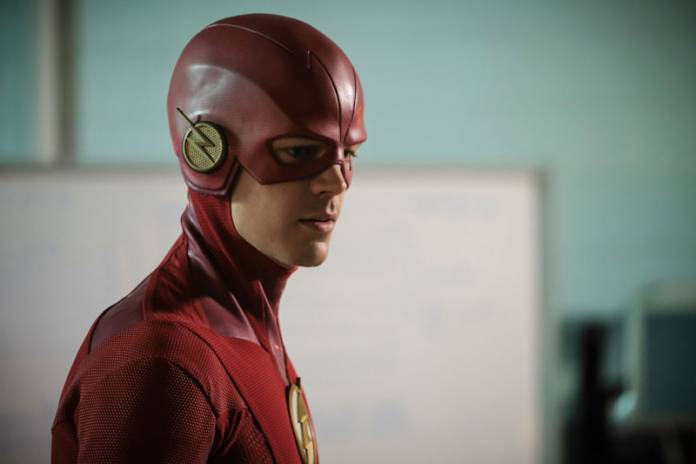 Time runs out for Eobard Thawne (Tom Cavanagh) at the start of this week’s episode of The Flash, titled “The Girl with the Red Lightning.” It was a strong opening for an episode that had a lot going on. We see Thawne tortured with electricity before being carted away for his execution after 15 years in prison. The stakes are high.

The stakes are high for Grace as well. She is seeing the ghost of her Uncle Orlin who tells her that the time has come for her to ensure their legacy by wiping metas off the planet for good. She has a plan to use the cryo-atomizer that she stole during last week’s episode
and she is sure it will work on a massive scale.

Barry and Iris are concerned about traces of the red lightning that surrounded Nora when she was active in the negative speed force. However, they still have the Cicada problem to deal with, so the team pushes on. They know that Grace plans to use the cryo-atomizer and the cure prototype, but they are not sure how. Sherloque states the silver lining: Grace has not yet put the atomizer to work, so she must not have all the technical elements she needs. 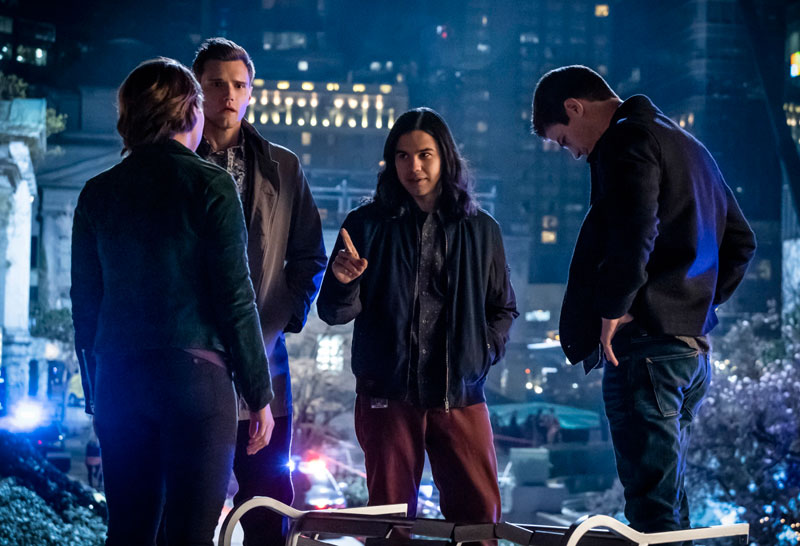 While they wait for Grace’s next move, Team Flash will try to get the real cure to as many metas as are willing to take it and Cisco will test out the mirror guns. Ralph has a lingering concern about Thawne’s involvement, and tries to figure out all of the different multi-verse time lines to determine what’s in it for the Reverse Flash. And Joe heads off to CCPD to tell Captain Singh the plan.

Sherloque goes to warn his new lady love, Renee Adler (Kimberly Williams-Paisley) that she is in danger. He knows she is a meta, even though she has not yet shared that fact with him. He wants to get her to CCPD to take the cure before Cicada II strikes. While they are discussing Renee’s future outside of Central City University, Cicada shows up and attempts to kill Renee. Sherloque alerts the team via the alert button on his cell phone and they arrive in time to save her life. We even get to see Renee’s meta ability – she has the power of telekinesis and is able to move a bench to block Cicada’s thrown dagger.

Cicada II escapes, but the team learns that she has stolen a quantum tunnel converter from the university. They figure out that all she needs is a hyper conduit for her mass meta killing machine. Nora tells them that in the future the device was created by Sebastian Ollins – Cisco’s former college roommate. Cisco tracks where Ollins has been working, and Barry goes to investigate, but he’s too late. Cicada II had already been there and planted a bomb as a trap for the Flash. The bomb goes off, but Barry is able to speed out in time. 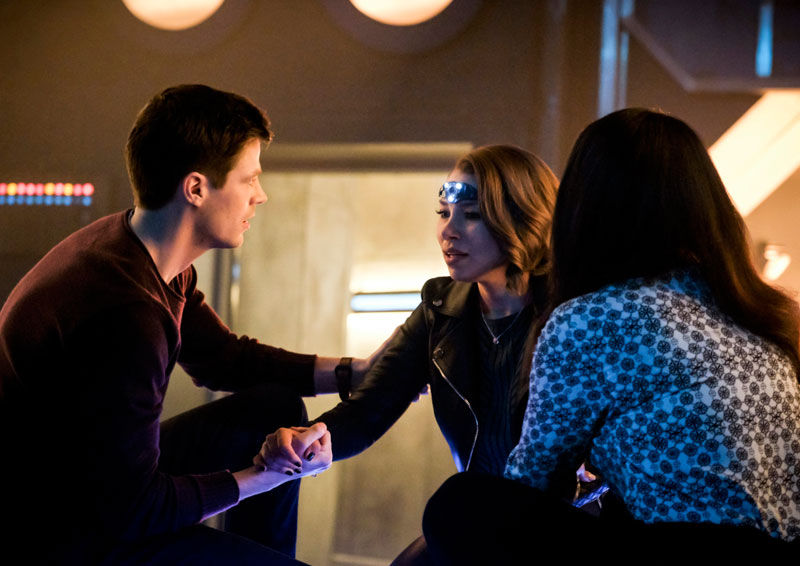 After noticing that Nora still has traces of the red lightning surrounding her, Barry wants to ground her from the rest of the mission. Nora is having none of that. She realizes that the negative energy is coming from Cicada II; they are still psychically connected from the time Nora was trapped in Coma-Grace’s mind. So, Nora goes behind the backs of her parents to use the mental activity enhancer to once again reach Grace and find out where she is. Barry and Iris try to stop her and the weekly heart to heart ensues – Nora convinces her parents that she is an adult who they trained to be a hero and she has to help before thousands die.

At CCPD, Joe is put in charge of the meta cure process and is having an uncharacteristically hard time organizing the police and the many metas who have shown up for the cure. Cecile and Joe have their private discussion where she calms him down and points out that he can do this as long as he speaks from the heart.

Sherloque shows up with Renee, wanting her to take the cure and be safe from Cicada, but Renee runs away. She explains that she likes her meta powers and wants to live her life on her own terms. It’s a brave stance and Sherloque and Renee share a kiss. Sherloque tells Renee there is still a way to keep her safe, and opens a breach to his own world. Renee steps into the breach and she and Sherloque blow kisses before saying goodbye. 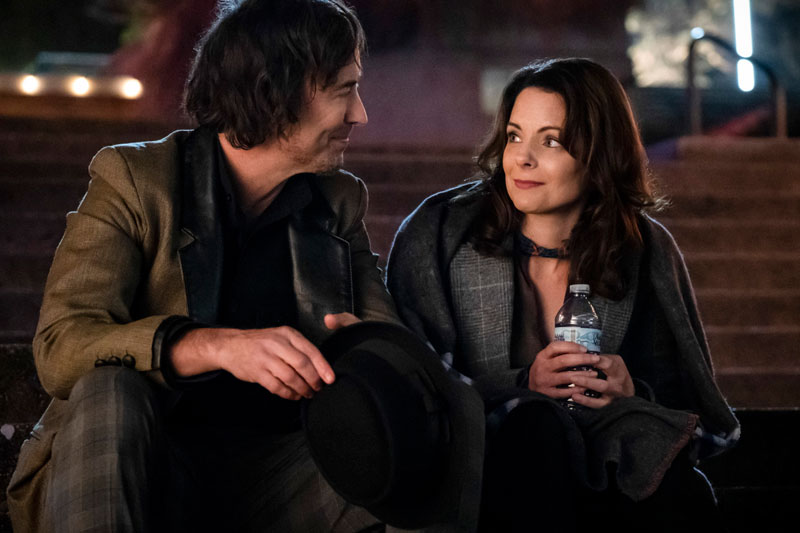 (I’m not sure how I feel about this scene. I know this is a set up for Sherloque to leave Central City at the end of the season, but I feel that this is total fan service for Tom Cavanagh fans. He and Kimberly Williams-Paisley have starred in a series of Hallmark movies called Darrow and Darrow, where their characters are on the edge of a romantic relationship. However, they have not shared a passionate on-screen kiss. The ‘shippers’ finally got their squee moment.)

Nora learns that Cicada II is at CCPD and the team shows up to save the gathered metas and stop her. Killer Frost, Nora, Ralph, and Barry fight with Grace, while Cisco attempts to dismantle her machine. He stops it just in time, Barry picks up the mirror gun to destroy Grace’s dagger, just as Ralph has his eureka moment. He realizes that Thawne had to make sure that Cicada II showed up in their timeline so the team could destroy Grace’s daggers.

Ralph yells for Barry to stop just as Barry pulls the trigger and the scene cuts to Thawne’s execution. The guards removed the chest plate that he had been wearing all season and we see Grace’s dagger laying across his chest. The dagger is what was inhibiting his speedster powers. If Barry destroys it in the past, it won’t exist in Thawne’s present and he will be able to escape. This is the cliffhanger ending that leads into next week’s season finale.

I’m looking forward to the showdown between Barry and Thawne. You can view the preview for next week’s season finale in the player below.

Frances Hodgson Burnett's 1911 novel The Secret Garden (check price at Amazon) has been adapted before. It's been on the big screen...
Read more
TV

Javicia Leslie Is the New Batwoman!

Warner Bros. Television, The CW and Berlanti Productions announced today that Javicia Leslie has been cast as the new Batwoman, following the...
Read more
TV

Stargirl Season 2 to Become a The CW Exclusive

The CW Network today announced it has given the green light to DC's Stargirl Season 2. The CW will become the exclusive...
Read more
TV

The CW Cancels Katy Keene After One Season

The CW has canceled Katy Keene after one season. Warner Bros. Television, the studio behind the Riverdale spinoff, is looking into other...
Read more
Movies

Michael Keaton in Talks to Play Batman in The Flash

Michael Keaton, who starred in Tim Burton's Batman and Batman Returns, is in talks to play Batman in The Flash movie, according...
Read more
TV

The CW has announced the network is adding a quartet of alternative acquisitions to its summer line-up and has set its remaining...
Read more
Movies

Judd Apatow has a long history of “Lovable Losers” in his work. All the way from Freaks and Geeks to The 40-Year-Old...
Read more
TV

Devils Series Acquired by The CW for Fall 2020

The CW has acquired international thriller Devils, starring Alessandro Borghi and Patrick Dempsey, adding the series to its Fall 2020 schedule. The...
Read more

Spectrum Originals has announced the premiere dates for L.A.'s Finest Season 2 and Temple. Gabrielle Union and Jessica Alba return for the...
Read more

HBO Announces First Between the World and Me Performers

The first wave of featured performers has been announced for HBO's adaptation of Between the World and Me, the critically-acclaimed stage show...
Read more

Acorn TV has announced the programs that are coming to the AMC-owned streaming service in September. The Acorn TV September 2020 lineup...
Read more

The Other Two, South Side, and Nora From Queens Go to HBO Max

HBO Max has announced that the upcoming seasons of the critically-acclaimed comedies The Other Two and South Side from Comedy Central Productions...
Read more
Load more