Dumbo Review: The Elephant is Reimagined for All Generations

On October 23, 1941, audiences everywhere were introduced to the little flying elephant with wings so huge that it practically caused him to soar. Disney‘s Dumbo won the hearts of many — both young and old — with its simple, yet effective storyline and a heartwarming character many could relate to. Now, Disney has aimed to reimagine this beloved elephant into a live-action format as a part of a longstanding program to bring their IPs from an animated format to live action. Brought to life from the mind of director Tim Burton, the film will open in theaters on March 29, 2019. This new adaptation is truly a reimagining of Disney’s Dumbo, taking some of the most precious moments from the original while expanding the storyline to explore questions that may have been unanswered for fans of the original.

The film takes place in 1919, just after Americans were being sent home after World War I officially was declared done. One of these Americans is Holt Farrier (Colin Farrell), a former circus star who returns back from the war with the hope that he can reclaim the life that he left behind. Unfortunately, he returns to find that his children Milly (Nico Parker) and Joe (Finley Hobbins) are still in mourning over their mother’s death and his former position at the circus axed after the show falls into dire financial straits.

After his recently-purchased Asian elephant gives birth to a baby elephant with ridiculously large ears, Max Medici (Danny DeVito) has Holt and his kids take care of the baby elephant. After an unfortunate incident gifts Dumbo his infamous name, the family discovers that the young elephant can fly. Medici wastes no time capitalizing on Dumbo’s newfound talent, which draws large audiences and brings the once-failing circus back to life. However, news spreads about the flying elephant, attracting V.A. Vandevere (Michael Keaton), a would-be attractions entrepreneur who wants to pair his talented aerialist Colette (Eva Green) with the elephant. Vandevere lures Medici and the traveling circus to give in to his whims and give him the young elephant, but it doesn’t take long for all to realize that the man who dangles the carrot doesn’t really intend to give it to the circus folk. Once the truth is revealed, the fight to restore Dumbo’s freedom begins. 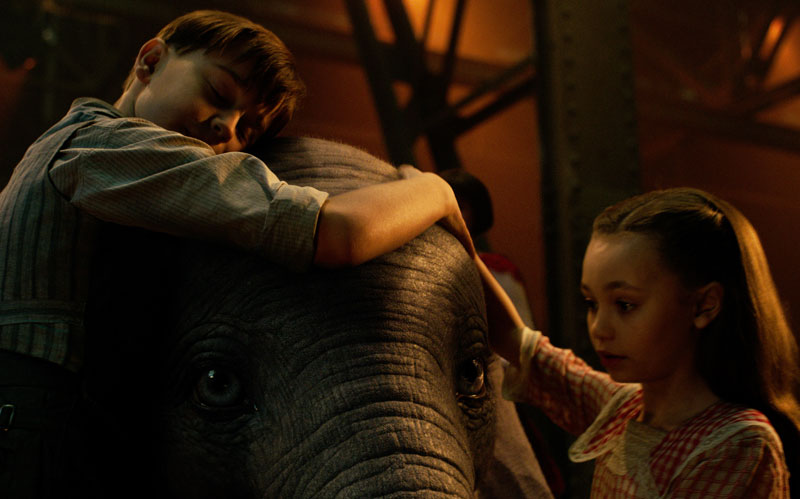 The writing, for the most part, was decent. Considering that the film is a reimagining of the original animated film, screenwriter Ehren Kruger did a fairly good job at breathing new life into this Disney classic. However, the inclusion of human characters within the story was hit or miss. At times, whether due to the writing or the direction given for the characters, I found that a good variety of the characters didn’t feel fully dimensional, almost like caricatures. Because of how the characters were constructed, I do feel like it contributed to the mixed acting performances that the ensemble provided throughout the course of the film. The most prominent examples that come to mind are Danny DeVito’s Max Medici or Michael Keaton’s V.A. Vandevere. Whether this is because both of those particular characters required larger-than-life performances, there was no way to really hide how non-fleshed out these particular characters were.

However, there were a couple of characters that were better fleshed out like Millie and Colette, the two supporting female character roles in the film. We are able to understand their motivations as they try to buck what society tries to tell them. In particular, it has to be noted that given the barebone outline of a character Colette was, Eva Green added more dimension to the character through the subtle performance she delivered when Colette was behind the scenes. This subtlety helped to inform us when Colette’s stage persona kicks into gear, especially with her scenes in public with Vandevere.

One final note I want to make with regards to the inclusion of human characters in the film: I was disappointed that we weren’t able to expand upon the circus troupe. We were able to meet them in really short spurts and there were tiny little windows of detail that we were able to glean during the movie. However, by the time the film ends, it was hard not to feel like giant chunks were missed in learning who the members of the circus troupe were. In a perfect world, I’d want a mini-series or something so we could learn more about the members of the troupe, but that seems like an impossibility. 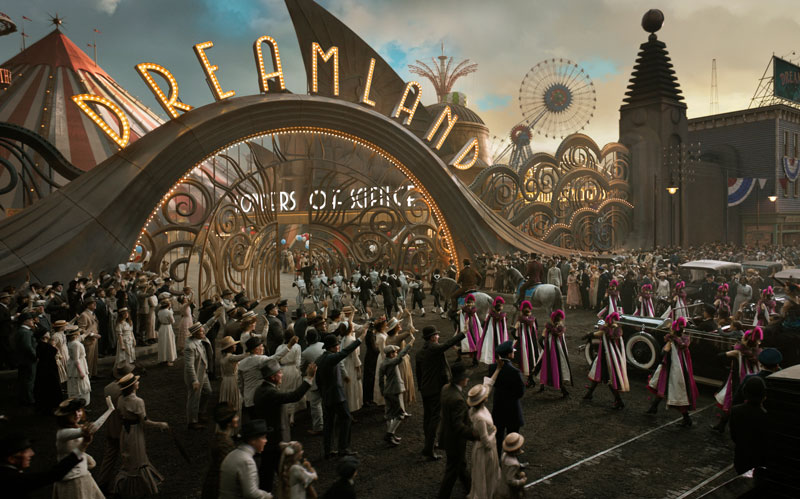 It would not be a proper Tim Burton review if I did not focus on the cinematography and the visuals of the film. In true Burton style, both areas in the film are nothing short of amazing. The style this go-round brings back memories of one of his previous films, Big Fish. You can tell in each setting how much thought and work was put in to convey the character of the circus as well as Dreamland. The characterization, as per what I would expect from Burton, also serves to help inform the audience of the type of people that occupy the setting. The traveling circus is designed to feel more lurid and gritty through the usage of different blues and browns, especially as the circus falls on hard, financial times. But there’s a realness to it that can’t be ignored. This contrasts against the more glossy, shiny Dreamland, which conveys how much Vandevere focuses on appearances to the point of fakeness.

Last but not least, the CGI-animated elephant very much stole the show from the actors, which is truly a testament to Disney and the creative team involved. When the film was first announced that it was getting the live-action treatment, there was some speculation about how they were going to bring Dumbo to life onscreen. What Tim Burton and the animation team has managed to come up with is nothing short of amazing, right down to the wrinkles on Dumbo’s skin. You can’t help but invest in Dumbo’s journey and the design — down to the voice, the elephant’s movements, and the personality — helps to endear the audience to the character and makes you root for a happy ending for the little guy.

Overall, Disney’s Dumbo is a decent adaptation that reimagines the story of the young flying elephant for a brand-new generation as well as older generations. While there are many who are expecting a direct adaptation of the film, I think the reimagining serves the original animated classic better in terms of its preservation of key elements from the original film while also greatly expanding upon Dumbo’s path after he leaves the circus.  While the human characters get lost in the background say for a rare few, the character Dumbo is the main focus and is guaranteed to steal your heart and make you cry. I will caution parents though that there are a couple of scenes that may scare or upset your children, so I’d recommend being mindful of that.

Onward Digital Release Set for Today and Disney+ on April 3

The Walt Disney Studios has announced that the Onward Digital (order at Amazon) and Movies Anywhere release has been set for today at 5:00PM PST/...
Read more
Streaming

Star Wars: The Clone Wars has returned for its seventh and final season on the Disney+ streaming service. In this review, we're taking a...
Read more
Legion of Leia

Lucasfilm's Star Wars: The Rise of Skywalker is now available on Digital (watch via Amazon) and you can watch 10 minutes of The Skywalker Legacy bonus...
Read more
Movies

Artemis Fowl Gets an Irish Blessing in a New Promo

Kenneth Branagh and Eoin Colfer on the Artemis Fowl Movie

Star Wars: The Rise of Skywalker Available on Digital Early

Following the announcement that Frozen 2 would be available three months early on Disney+ this Sunday, Disney has now also made Lucasfilm's Star Wars: The Rise...
Read more
Streaming

There's some good news for all the Disney fans having to stay home due to the Coronavirus (COVID-19)! The Walt Disney Company has announced...
Read more
Movies

The New Trailer and Poster for Pixar Movie Soul

The Walt Disney Studios has released the new trailer and poster for Pixar movie Soul, which opens in North American theaters on June 19, 2020....
Read more