We recently attended the press conference for the highly-anticipated live-action reimagining of Disney‘s Dumbo. The press conference was split into two parts. Attending the first part of the press conference was producer Derek Frey, producer Katterli Frauenfelde, production designer Rick Heinrichs, costume designer Colleen Atwood, composer Danny Elfman, screenwriter Ehren Kruger, and producer Justin Springer. While there was much to learn about the film being reimagined, how the score was created, and what kind of visual palette was utilized to inject Tim Burton’s flair within the realm of the mythological elephant, one very important question hung in the air. How would Disney adapt the original film to interest the modern audience, especially for those who had grown up watching the original animated film?

The original animated Dumbo was approximately 60 minutes long. While the film is short and well-rounded and conveys a story to all that teaches us to embrace what makes us unique, it’s hard not to question whether or not the story can be expanded. This was something that screenwriter Ehren Kruger wondered himself in the earlier stages of writing the script.

“Dumbo is not just a Disney character. He’s a mythological character. And I wish he were real,” he shared. “I wish I could have been in the audience of that circus in the golden age of the circus and observe his story. And then to take the next step, not just observe his story, but imagine what it’s like to be Dumbo. And that leads you to a place where you say what would Dumbo want and is the end of the 1941 film truly a satisfying end for Dumbo of that story? And so that just organically led to expanding the story past where the animated film ends.”

While many have focused on the new additions to the story, mostly the inclusion of the human circus characters that occupy Dumbo’s world, many people like myself were wondering how far this reimagining would stray from the path of the original. For the purpose of adapting the film to the live-action format, it made sense to include human characters to sort of serve as the eyes of the audience. But what elements from the original would be included to serve as a guiding point for audiences who grew up with the original film? 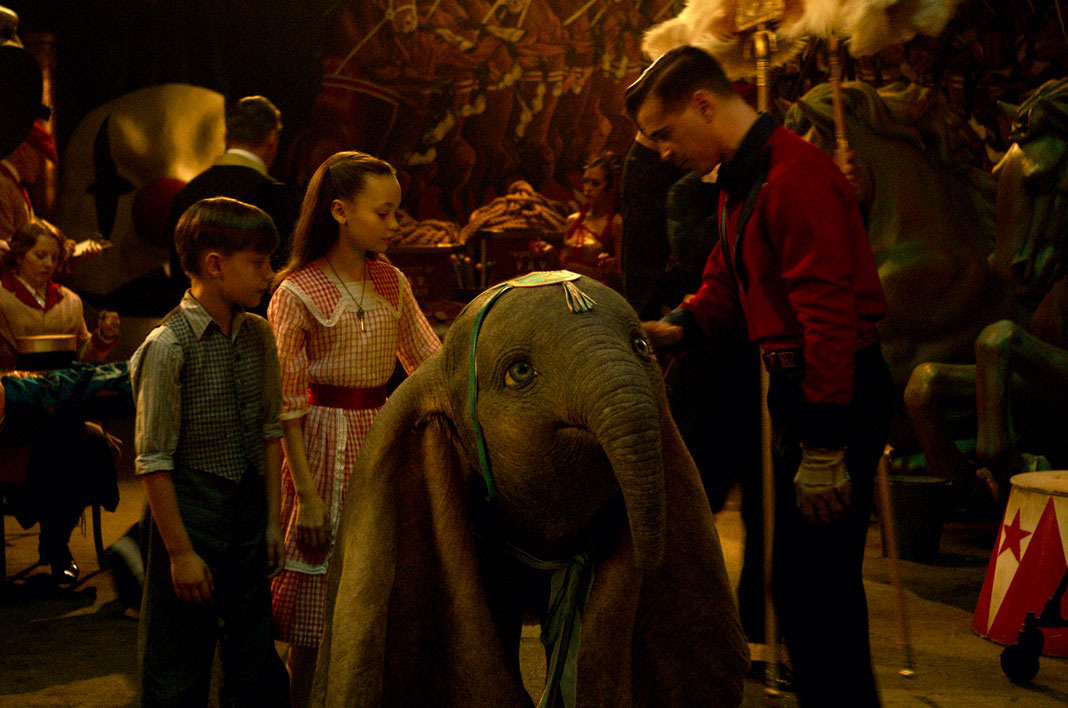 “I just thought about things that I associated so strongly with the story,” Kruger admitted. “Pink Elephants, Casey Jr., Firefighting Clowns. Just the things that I remember. It’s kind of like Danny [Elfman] talks about. Zeitgeist memories or things in the back of your head. I remember that moment. I remember that image. And of course, in writing the film, I went back and revisited the animated movie a number of times. But I really tried to get to that place of what are the core things that I associate with this? What are the simple things I associate with this story? And those have to be there?”

Adapting Dumbo for modern audiences ultimately came to taking apart the story, finding the foundation, and expanding the story to tell something that could touch upon universal themes that many audience members can relate to, producer Justin Springer explained. The desire to know more about where Dumbo goes after the events of the original film and how the little elephant’s actions impact those around him drove the expansion.

The approach taken by screenwriter Ehren Kruger and producer Justin Springer to focus on the foundation rather than muddy up a story with too many things may be the best approach. Sometimes I find with adaptations that too much attention is placed on needing to make the original source material more complicated than it needs to be. However, by keeping the story simple and by paying homage to the original film without overshadowing the newest additions to the film, I think the team behind Disney’s Dumbo may have found a writing formula that will resonate more successfully with modern audiences as Disney continues to adapt their classic animated films.

The Indiana Jones 5 production is beginning earlier than we thought! In an interview with CBS Sunday Morning, which you can watch using the player below, The...
Read more
Movies

Aladdin 2 in Development with Writers John Gatins and Andrea Berloff

The Walt Disney Studios is moving forward with Aladdin 2! According to Variety, the studio has given the green light to writers John Gatins and...
Read more
Movies

Rick Moranis to Return for New Honey, I Shrunk the Kids Movie

Rick Moranis has closed a deal to return to acting in The Walt Disney Studios' upcoming Shrunk, a new installment in the Honey, I Shrunk the...
Read more
Movies

Following the Avalanche clip, Disney's 20th Century Studios has released a second clip from The Call of the Wild in which Harrison Ford's John Thornton meets...
Read more
Movies

The Journey Is Impossible in the New Mulan Commercial

Even though we got a Super Bowl spot and final trailer a week ago, The Walt Disney Studios is not slowing down on the promos...
Read more
Movies

Disney and Pixar today are taking you behind the scenes of Onward, opening in theaters on March 6, 2020. In the video, you'll get...
Read more
Movies

Disney to Release Hamilton Film in Theaters in October 2021

The Walt Disney Company, Lin-Manuel Miranda, Jeffrey Seller, and Thomas Kail have announced an agreement for the worldwide distribution rights that will bring the...
Read more
Movies

The Walt Disney Studios and Marvel Studios have revealed the Black Widow Super Bowl spot, which features new footage from the anticipated movie! You can...
Read more
Movies

The New Trailer for Mulan Released!

Following the airing of the Super Bowl spot, The Walt Disney Studios has released the new trailer for Mulan! The anticipated movie opens in...
Read more

AMC released today the opening minutes of the highly-anticipated The Walking Dead Season 10 Episode 9, as well as a sneak peek scene from the...
Read more