I spent the past two weeks watching the first season of Marvel’s The Punisher for the first time prior to watching Netflix‘s brand new season, which launched on January 18. The first season started off slowly but quickly ramped up on the bloodshed, secrecy, and government shenanigans in a way that grabbed us by the eyeballs and forced us to keep going. The first season was gripping and put a magnifying glass on how American society treats our soldiers when they return back from war. When I finally finished Season 1 last night, I immediately launched myself into the next season because I was so sad that the first had ended.

I had no idea what to expect going into the new season of Marvel’s The Punisher, but I hoped that they would further expand upon Frank Castle now that he had a new lease on life. Needless to say, I kind of got my wish with the first episode titled “Roadhouse Blues.”

When we last left Frank (Jon Bernthal) in Season 1, he had been given money and a new identity to start his life anew. However, in the cold open of this episode, we know that he gets pulled back into the chaos once more as he rains down bullets upon a gang of villains from his trusty old van. There’s a strange young woman in tow, but no information is given in those couple of minutes. And then, cue the credits! 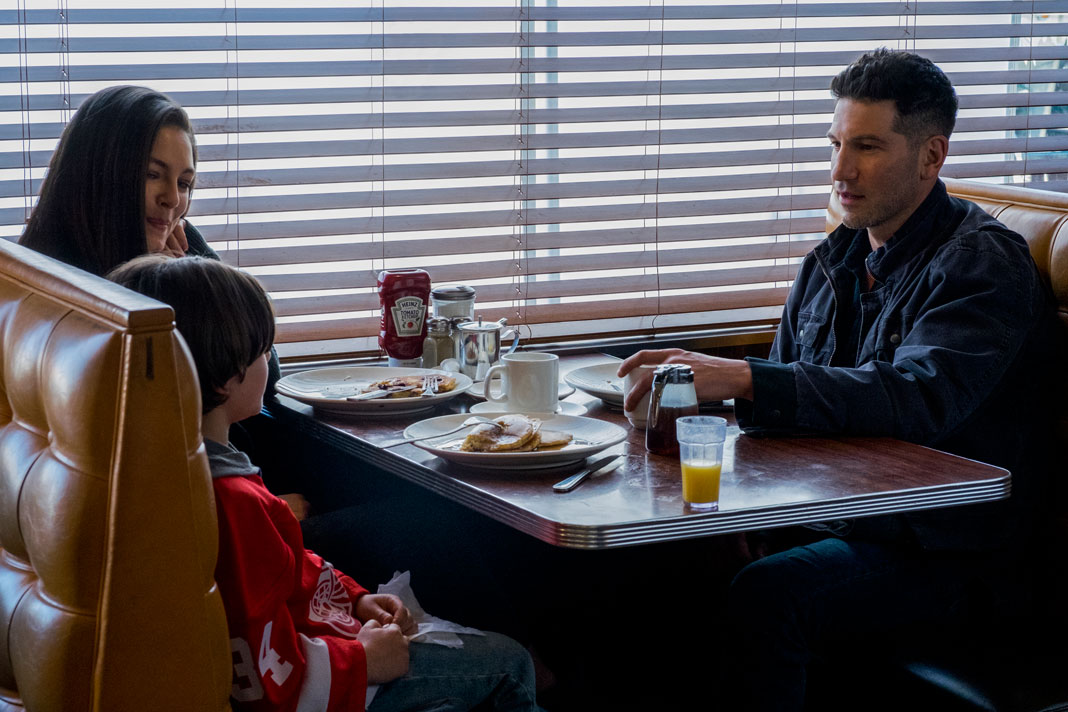 The first half of the episode actually features a rather calm and mellowed out Frank. We next see him in a bar somewhere in Michigan where he’s taking in the country stylings of some band. In what is a much deserved moment, he ends up clicking with the female bartender, Beth (Alexa Davalos). They end up hooking up. But we get to see how Frank is still dealing with the loss of his wife, Maria (Kelli Barrett). Considering how traumatic witnessing his wife and children die was for him, it makes sense that intimate moments like a one-night stand would bring out his more vulnerable sides.

There will be some who will be frustrated by how slow the episode moves. But, after literally binging the first season, the slow pace was a much-needed respite from the quickly ramped-up violence that the last half of Season 1 threw at me. The slow pace also allows us to see an arguably new side to Frank. He’s still aware of his surroundings. However, he’s much more relaxed without the thought of any active danger around him. Until the mysterious girl (Giorgia Whigham) we saw in the opening scene appears at the bar. And all it takes is a perceived damsel in distress to prompt Frank into action.

Now, we get a brief glimpse of what the girl is actually up to in a brief scene. She arrives at the bar before Frank starts hitting it off with Beth. As soon as she manages to find a pay phone, she calls what I can only interpret as her handler. She delivers news regarding photos that she has in her safe keeping. Unfortunately, not knowing that her handler was in the midst of being tortured by a mysterious man (Josh Stewart). She gives her location and tells her handler to meet her there the following day. Needless to say, her handler does not meet up with her. He’s at a loss for air. 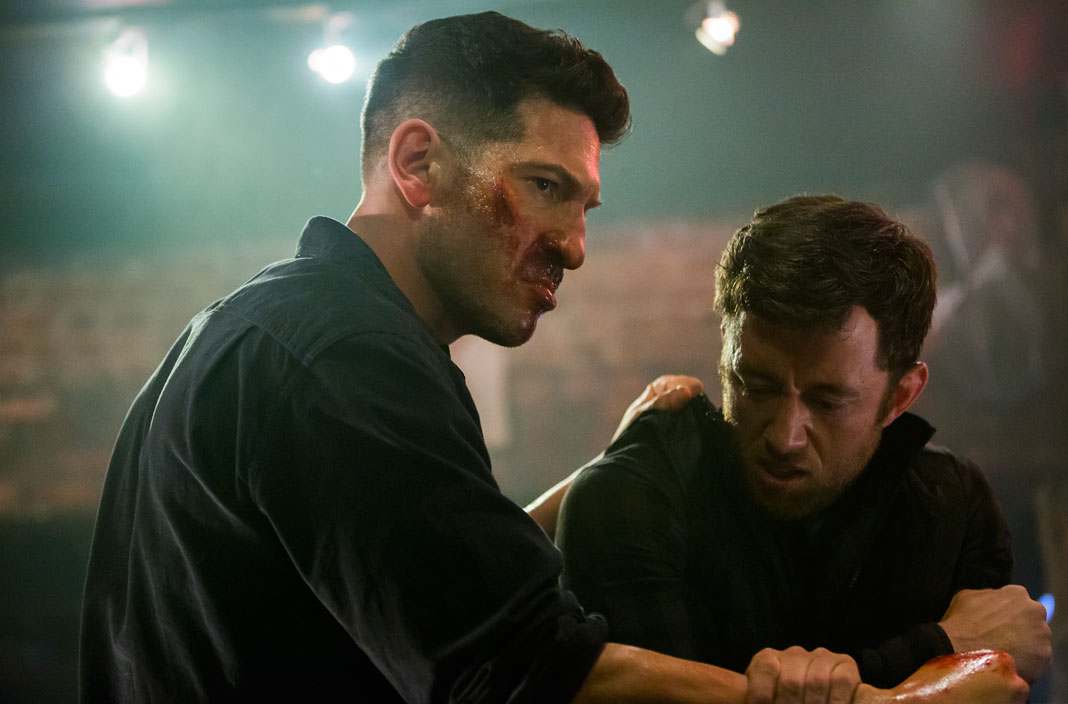 When it comes time for the girl to meet up with her handler, something is amiss. Frank picks up on that right away. It’s a little hard not to notice a bunch of pretty obvious non-locals pop into a bar. It doesn’t take long to put two and two together. Frank starts to get his hands bloody and, oddly enough, it feels really good to watch him kick all of the ass.

Unfortunately, there is collateral damage. Beth, the bartender that Frank got intimate with, tries to grab a shotgun after seeing the bouncer of the bar get shot repeatedly. In the heat of the moment though, she isn’t fast enough and when she goes to shoot, she ends up getting shot instead. This is what prompts Frank to quickly dispatch the others before taking both the girl and Beth away in his van. We’re then brought back to the scene that we saw in the cold open.

Frank is able to get Beth to a hospital where she can be treated for her gun wound. However, he doesn’t stick around. He drives off to get as much distance between him and whoever is coming after the mysterious, smart-mouthed girl. That being said, it does look like Frank’s new lease on life is about up. It is time for The Punisher to start kicking into gear. 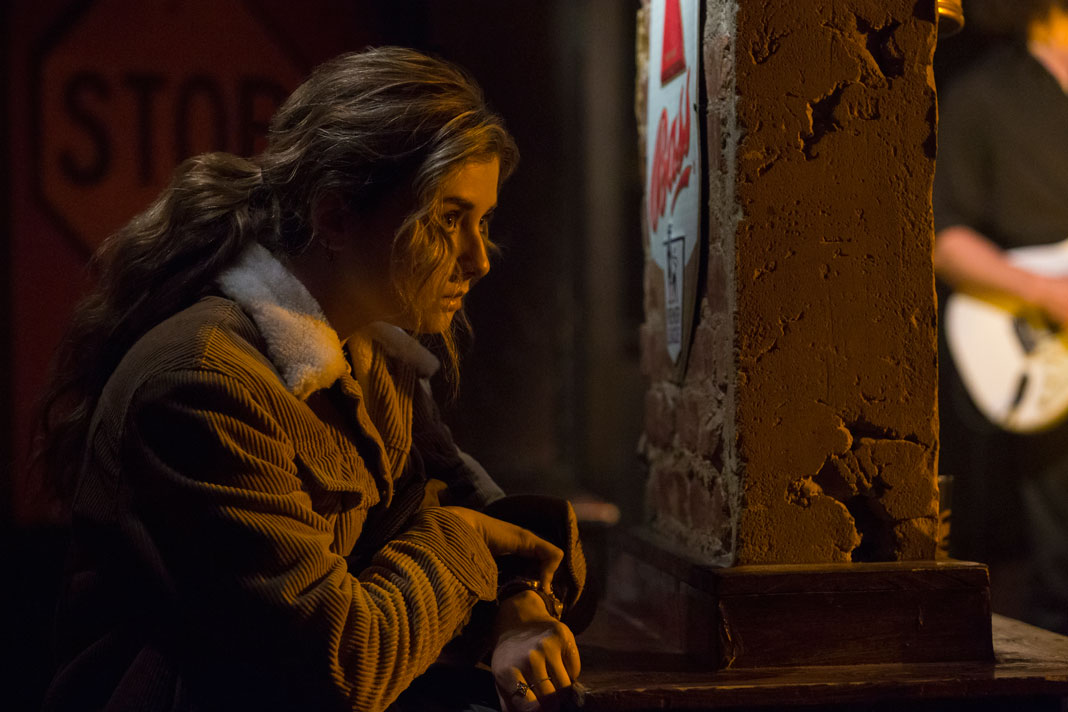