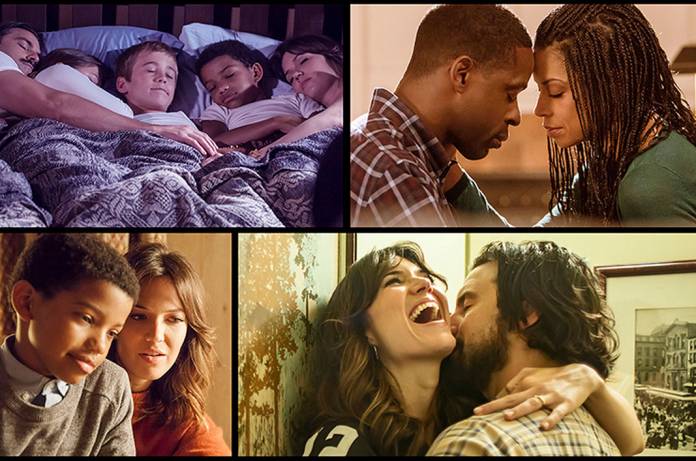 Now that we know how Jack Pearson (Milo Ventimiglia) dies on NBC‘s This is Us, we still have so many questions. Why are Kevin and Zoe going to Vietnam? What’s wrong with Toby? What’s going to happen with Dèjá? While we have to wait until September 25th for the third season of NBC’s breakout show for the answers, This is Us writers Elizabeth Berger and Isaac Aptaker discussed with reporters what’s ahead on the Emmy-nominated dramatic series at the recent Television Critics Association summer press tour.

Question: How do you raise the bar and stay ahead of these shows that seem to be trying to mimic what you’ve already achieved?

Isaac Aptaker: I definitely feel the pressure. What’s so cool about the style of our show is that we can just sort of keep on growing and expanding out in time. So we’ve been through a lot of different generations with this family, but we’ve really only spent 36 hours with them. There’s so much more to these lives than those 36 hours. We are challenging ourselves in Season 3. Now that we’ve figured out our audience will go with us, they’re along for the ride, they’re really smart, they’re really sophisticated, we’re kind of breaking all the rules. And we’re challenging ourselves to jump to decades we’ve never been in before and go into the future, as we’ve seen a little bit, and really play with the storytelling format in a way that’s just much more complicated than we were able to in earlier seasons when we were kind of showing people how the show worked.

Elizabeth Berger: And I think you can’t think too much about what people are doing. We’d go nuts if we thought about it, so we try not to. And we try to kind of just stick to what we’ve always done. We have stories for Season 3 that we are just so excited about, and we think that new dramadies don’t take away from that at all. We’re just going to keep our heads down and sort of tell these great stories.

Aptaker: Also, we’re excited that there’s more stories about real people… the movies are so dominated right now by superheroes and aliens. It’s great that there are stories that are reflecting our lives back at us. That’s what TV is for.

Question: This is for Elizabeth and Isaac also. The scripts that you have a responsibility, obviously you have every bit of the minutia down in terms of what you’re doing with the characters. Do you have, along with Dan, the overall arc of a season when you start the season, knowing where the characters are going, each detail?

Berger: We do. Our process is very similar to what he just described. We came into Season 1 sort of with the broad strokes. Dan had already figured out how Jack died. We had a general sense of sort of how our series ended. And sort of each season, we know sort of the broad strokes of where we’re going. And then the exciting thing is, episode by episode, sort of filling in the blanks with great stories. But we know our big stuff.

Aptaker: Yeah. So often what works on our show are things that come from real experience. Our writer’s room is a very safe place. There’s a lot of crying — that probably doesn’t surprise anyone where people really feel like they have permission to talk about things that they wouldn’t talk about anywhere else in their lives, really. Maybe in therapy. Then we have experts come in to speak to things that our writer’s room can’t speak to personally. So when we hear something that’s usually an anecdote or usually something that’s from someone’s family history or their own life, that’s when we know, “that’s really special. There’s no doubt that someone else out there in our audience has been through a moment like that. Let’s put it on TV.”

Question: Can you talk about the advantages, as well as the challenges, in your mind, of running a network show as opposed to a cable, premium, or streaming show in the current landscape?

Berger: The sheer amount of content, I think, that we’re trying to create in a limited amount of time, I think, we’ve found to be the biggest challenge. Our show continues to get bigger and more ambitious just on a production level. And I think sort of just keeping up and sort of getting a show on the air every Tuesday night is sort of our biggest challenge.

Question: What can you share about where Season 3 picks up, when the new season picks up and anything that you can share about the storylines?

Aptaker: We pick up on our Big Three’s birthday. So we sort of like that. In a show that plays with time so much, there’s something kind of very nice, and it grounds everyone. So we are picking up with everyone turning 38. In terms of stories, we teased a lot of where we’re going at the end of our season last year, sort of when we saw Kevin going on an airplane with Beth’s cousin Zoe to Vietnam. We saw Toby in the throes of a depressive episode. We are going to our storylines are going to catch up to all of those moments over the course of this year.

Question: You’re going to spend a lot of time, I assume, exploring Jack’s time in Vietnam; correct? Have you cast the character of Nicky? Is there anything that you can say about that?

Aptaker: I can’t tell you who we’ve cast to play Nicky just yet. But, yes, we are going to be spending a lot of time in Vietnam. We hired Tim O’Brien, who is one of the premier novelists and a veteran himself, to come consult in our writer’s room, because most of us were not actually alive during Vietnam. We wanted that authority there to really get the story right. He’s been wonderful. He came in and spent a week with us and just shared so much of his experience. Going back to how our show is at its best when it comes from someone’s life story. We took so much from Tim and his life. He’s actually co-writing, with Dan Fogelman, an early episode that really dives into Jack’s history there.

Berger: Yeah. It’s really exciting for us. There’s something very freeing about sort of being past the mystery of Jack’s death and sort of moving into this new chapter and getting to tell just a whole completely different kind of story. And it’s sort of different than anything we’ve any of our writers have done in our first two years. So sort of to be all of a sudden be immersed in the Vietnam War, we think it’s going to be really special and really different.

Question: How significant is the character of Nicky going to be in Season 3? How many episodes, if you can say?

Aptaker: Yeah. You have to watch.

Aptaker: That future storyline is part of our bigger picture plan for the series, but there will be answers in the future this season as well.

Question: Then do you have an overall theme for this season? Will it be darker, lighter? And just any thematics you can discuss without giving away plot?

Berger: Interesting. I think that we felt like, at the end of Season 2, our family had grieved and processed the loss of Jack in sort of a deeper level than they ever had before. So I think this is a very sort of hopeful season, and it’s a season about true new beginnings for everybody.

Aptaker: What’s tricky is when you get someone that famous in an ongoing storyline on a TV show, it’s very difficult to get that person back because they’re off making movies or directing movies or what have you. But I think we’ve always felt that Kevin is a famous actor, so it feels very organic to his world and makes those storylines more credible to have real people playing themselves as opposed to casting someone and making up a famous action star that doesn’t exist. It’s tricky, because you know you’re probably not going to get Sly back for another episode, but I think it adds authenticity to the story.

Berger: Yeah, you’re always sort of trying to strike that balance between “Is this distracting, or is this worth it?” And that was one where we felt like we also really wanted to have someone that it felt like Jack would have genuinely loved when the kids were growing up. So in that case it felt like, if we can get someone so big that you feel that sort of iconic sense when he walks onto the screen, it really works. But, yeah, we try not to do it too much because we don’t want people to be taken out of the show.